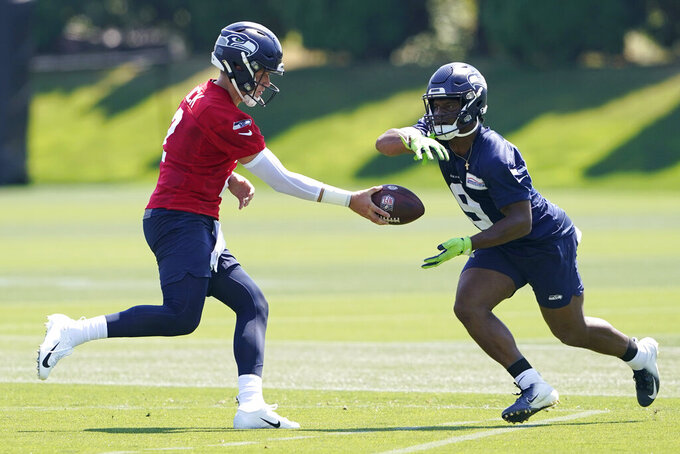 RENTON, Wash. (AP) — As recent years have shown, keeping their running backs healthy for an entire season has been an issue for the Seattle Seahawks.

So while the Seahawks are going into this season with the intention of using Rashaad Penny as their featured back, it seems more likely the depth of Seattle’s running backs room — especially with the expected style of the offense — will be tested at some point.

Penny closed last season in an impressive manner, which Seattle hopes is a precursor for this year, but he also has a lengthy injury history.

That’s where rookie Ken Walker III comes in. And Deejay Dallas, going into his third season. And Travis Homer entering his fourth year. If the Seahawks are going to lean heavily on the run game to be productive offensively, especially with the uncertainty at quarterback, it’s going to take more than one ball carrier to get that done.

“We’re just a group of hungry guys. We call ourselves the pack. The wolfpack. Crazy, you know?” Dallas said with a chuckle. “I think we all just push each other. We’ve got a great group of guys."

Penny knows this is a prove-it season because of his past health struggles. The six-game flash he had at the end of last season was Penny finally displaying the promise that came with being a first-round pick. The fact he finally got there led to a mixture of relief, frustration and the realization that it was just a small snippet with plenty left to prove.

“It was no surprise to me because I always knew what I could do. I think the hard part was just me getting to play on Sundays,” Penny said. “I think that was really the most difficult thing for me and now that I’m feeling healthy and feeling at my best, I can’t wait to actually take off this year. Having all these guys in the running back room competing, I feel like it’s the same thing as my rookie year. These guys are really hungry to take reps away and I’m hungry to do the same thing but it’s all out of love and competition and that’s really what it’s about.”

Walker was a surprise pick by Seattle in the second round, but it made sense once the news of Chris Carson’s ongoing neck issues became known. Carson was released last month after failing his physical, meaning it will likely be Walker stepping into the role of the complementary back to Penny.

“He’s fast. This dude can play and reminds me of a smaller Chris,” Penny said.

One thing that will help determine how fast Walker gets on the field is his ability to pick up pass protection at the NFL level. If Walker struggles, he could be limited to being more of an option on early downs.

That’s where Dallas could see an increased role. Dallas seems the most likely to step into the role of third-down back, but he doesn’t want to be limited to that. Dallas is hoping a full, relatively normal offseason for the first time in his career will pay off.

“It takes a group, it takes a pack to finish out a season,” Dallas said. “And I just want to be the guy, when my number’s called, I want to be ready.”

NOTES: Coach Pete Carroll returned to practice Friday after having tested positive for COVID-19 last weekend. Carroll was wearing a mask during the open portion of practice. Carroll had been participating in meetings virtually while isolating after his positive test.