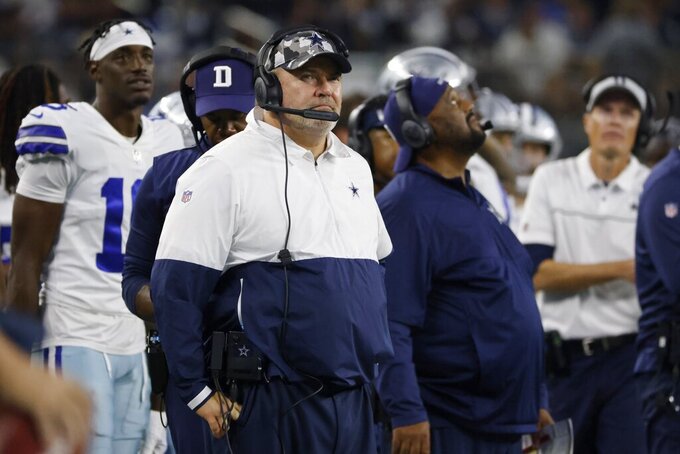 ARLINGTON, Texas (AP) — Geno Smith is the choice as the first replacement for Russell Wilson at quarterback for the Seattle Seahawks.

Coach Pete Carroll made the announcement Friday night after a 27-26 preseason loss to the Dallas Cowboys that included three interceptions from Drew Lock.

It seemed clear Lock's rough night, which did include a touchdown pass, wasn't the deciding factor. Smith played one series before Lock played into the fourth quarter.

“Geno, he knows our stuff and he does really well and he understands it and he commands everything that we’re doing,” Carroll said. “He’ll give us the best chance to play great football right off the bat.”

The Seahawks are entering a new era after trading the Super Bowl winner and 10-year starter Wilson to Denver, where Lock started 21 games over the previous three seasons.

Lock saw plenty of playing time after missing the second preseason game because of COVID-19. Carroll said it would be a “makeup deal,” but Smith had already done plenty to make the Seahawks think he was the choice.

“This is just step one in the process, but it’s really about winning,” said Smith, who was Wilson’s backup after starting most of his first two years in the NFL with the New York Jets and has 34 starts in 45 games over eight seasons. “None of this will matter if we don’t go out and win the games we’re supposed to win.”

Despite Lock's picks, the Seahawks (0-3) never trailed until the Cowboys went ahead on a connection between a pair of long shots for the roster. Ben DiNucci found tight end Peyton Hendershot on a 14-yard TD with 4:07 remaining.

In his only series, Smith moved the Seahawks to the Dallas 19 before a penalty and a 14-yard sack forced them to settle for the first of four field goals from Jason Myers, a 53-yarder.

Israel Mukuamu intercepted Lock's second pass before Lock threw a 35-yard TD to Penny Hart on the first play of his second series following a fourth-down stop by the Seattle defense.

Dallas' Nahshon Wright came off his man on the outside and stepped in front of Hart on Lock's second interception, setting up Will Grier's 1-yard scoring toss to Simi Fehoko to get the Cowboys (2-1) within 13-10 late in the first half.

The third interception from Lock set up another Dallas TD when undrafted rookie safety Markquese Bell corralled a tipped pass and rumbled to the Seattle 13 while star quarterback Dak Prescott stopped his TV interview to celebrate. Brandon Smith made a toe-tapping catch in the end zone for a 20-20 tie.

Lock led another TD drive to start the second half, but running back DeeJay Dallas was the focus. The third-year back had 50 of his 75 yards rushing on the drive, capped by his 1-yard plunge for a 20-10 lead.

“As a competitor, you’re always disappointed, and I was disappointed,” Lock said about Carroll's decision. “You want to be able to step on the field and show that you can do it. Now, it’s my job to have his back. Be the best teammate I can be.”

Not much appeared to change in the competition behind Prescott, who sat the entire preseason for the second consecutive year. This time it was by design after a shoulder injury kept him out most of the 2021 preseason. Almost every other projected Dallas starter didn't play this preseason either.

Incumbent Cooper Rush handled one series that ended in a punt before Grier played the next 2 1/2 quarters, finishing 12 of 22 for 88 yards with two scores and no interceptions.

The Cowboys were two days removed from getting the news that eight-time Pro Bowl left tackle Tyron Smith probably will be out until December with a torn hamstring that also resulted in a fracture in his left knee.

His most likely replacement, rookie first-round pick Tyler Smith, didn't play because of an ankle injury. Second-year man Josh Ball started and saw plenty of action, but doesn't appear ready to be the starter on Prescott's blind side.

After returning a kickoff and a punt return for touchdowns last weekend, Dallas receiver KaVontae Turpin didn't see action in the return game and got some work on offense. He had an 8-yard catch on two targets.

Seattle receiver Dee Eskridge returned from a hamstring injury and had an 18-yard punt return and an 8-yard catch on three targets. The Seahawks envision him as the No. 3 receiver, but he's had trouble staying healthy.

Dallas CB Kelvin Joseph, whose roster spot could be in jeopardy, left after the first play and didn't return. He was ruled out with a concussion.