Seahawks select Mafe, Walker in 2nd round; Lucas in 3rd 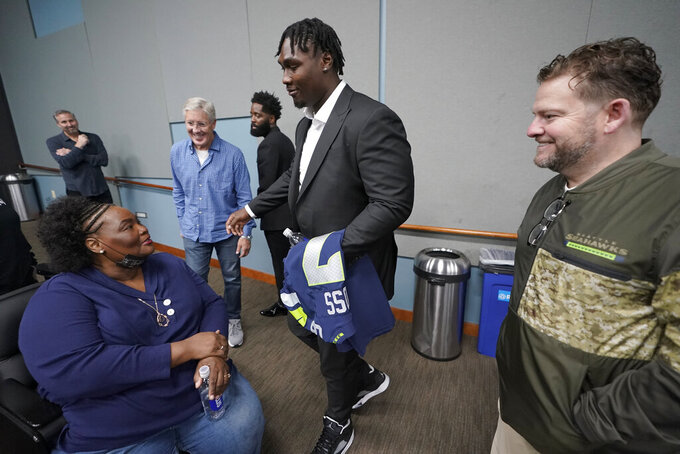 RENTON, Wash. (AP) — Even with nearly all the quarterback prospects still available, the Seattle Seahawks decided the second day of the NFL draft was too early to try to find another quarterback as a potential option to replace Russell Wilson.

The Seahawks instead addressed specific needs by selecting edge rusher Boye Mafe from Minnesota with the No. 40 pick and running back Kenneth Walker III from Michigan State at No. 41 on Friday night.

The Seahawks came back in the third round and selected a likely right tackle in Abraham Lucas from Washington State at No. 72 overall, providing a bookend to what Seattle did in the first round. Seattle got its left tackle of the future when it took Charles Cross from Mississippi State with the No. 9 overall pick Thursday night. It was Seattle’s highest pick since 2010, when it selected left tackle Russell Okung at No. 6.

The first two days were very focused and reinforced the idea that despite trading Wilson, Seattle seems fine with a current quarterback room of Geno Smith, Drew Lock and Jacob Eason.

“Three of the four picks really makes a statement about the emphasis of what we’d like to get done,” coach Pete Carroll said. “Shored things up on the edge and with Kenneth coming in. Kenneth is an explosive, exciting running back to add to what we got.”

Selecting Mafe made sense for Seattle, which is looking to bolster its pass rush with an athletic edge rusher as the Seahawks adjust to more of a 3-4 defensive scheme.

But drafting Walker immediately raises questions about the health of running back Chris Carson after he underwent neck surgery last season. Seattle re-signed Rashaad Penny as the likely primary running back.

Carroll sounded cautious about Carson and his recovery.

“We don’t have updates on Chris. We won’t know for some time here,” Carroll said. “We can’t predict yet, so there’s a little bit of uncertainty that we're waiting on.”

Mafe was a third-team All-Big Ten selection and led Minnesota in tackles for loss and sacks last season. At 6-foot-4, 260 pounds, Mafe has impressive speed and athleticism, running a 4.53 40-yard dash at the NFL combine and posting a 41½-inch vertical leap at his pro day.

Mafe played in a 3-4 scheme at Minnesota and made a visit to Seattle in the pre-draft buildup.

"Talking to the coaches, it was great. We talked about ball a lot. They taught me a couple of things,” Mafe said. “The culture that they were trying to instill there I could understand it and I could buy into that.”

Walker’s resume makes it hard to argue with the selection, especially if Carson is unlikely to return to full health. Walker was a first-team AP All-American, the Big Ten running back of the year, and he won both the Doak Walker and Walter Camp awards. Walker finished second in the country with 1,636 yards rushing and 18 rushing touchdowns last season. He finished sixth in voting for the Heisman Trophy.

Walker said he met with the Seahawks at the combine but otherwise had limited contact with them. Getting the phone call from the Seahawks was a bit of a shock.

“Actually, I am very surprised," Walker said. “But at the end of the day, it’s a blessing to be on this team. I’m grateful for them giving me that phone call and it means a lot.”

Lucas grew up a Seahawks fan and was a four-year starter during his career across the state in Pullman. Lucas started 42 consecutive games for the Cougars and was a first-team All-Pac-12 selection in his final season.

Cross and Lucas played part of their college careers in the offense of Mike Leach, which limited their opportunities as run blockers.

“It'll certainly be a challenge, but everything is a challenge on this level and in the game of football,” Lucas said. “It’ll be something that I can excel at as much as I did with the Air Raid stuff in college. So I’m excited about the opportunity.”