Search for new coach begins for Jets, with Douglas in charge 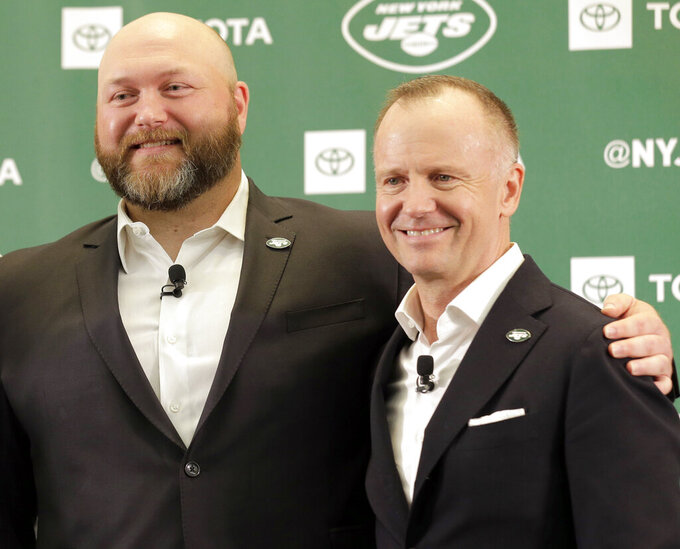 FILE - In this June 11, 2019, file photo, new New York Jets general manager Joe Douglas, left, poses for a photo with owner Christopher Johnson during a news conference at the team's NFL football training facility in Florham Park, N.J. Johnson said the search for a new head coach will be a collaborative effort between him, Douglas and team president Hymie Elhai, but Douglas will take the lead in finding the next hire. (AP Photo/Seth Wenig, File)

The team's chairman and CEO is looking for more victories. A winning culture. Sustained success.

“Look, I am sick of losing,” Johnson said Monday. “I am so tired of all of this. As are the players. As are the fans.”

Johnson fired coach Adam Gase on Sunday night, hours after the Jets completed a 2-14 season that included a franchise-worst 0-13 start. They haven't been to the postseason since the 2010 season, a 10-year drought that currently ranks as the longest in the NFL.

“I’m not going to say a bad thing about Adam. He’s a good man," Johnson said. “It clearly didn’t work out. But we’re going to look forward to a different kind of coach with this next hire.”

The road to respectability begins now for the Jets, who are on their third coaching search in six years.

Johnson said it will be “a collaborative effort” involving him, team president Hymie Elhai and general manager Joe Douglas — but Douglas will be taking the lead in finding the next hire. That puts the spotlight firmly on Douglas, who was brought in as GM in June 2019 and will be making this type of franchise-changing decision for the first time in his career.

“He’s been around a number of very, very good NFL teams,” Johnson said, referring to Douglas' previous stops in the front offices of Baltimore, Chicago and Philadelphia. “He has seen the best of us. He’s taken it in. And he has strong opinions about how to do this right, how to bring in the right culture. I think we’ve seen with his early moves in the direction of that, and I think we should have every confidence in him as the man on point in the search.”

Johnson said virtual interviews will begin immediately, and candidates don't need to be specifically offensive- or defensive-minded. One of the criticisms of Gase was that he was focused only on the offense and had Gregg Williams handle the defense.

“This is a coach for the entire team,” Johnson said. “And that’s very important to us looking forward.”

Another possible change is the Jets' reporting structure. Since 2015, the coach and GM have reported directly to ownership rather than the coach to the GM.

Either way, Douglas' decision will ultimately go a long way in determining if the Jets turn things around in the near future — or are stuck in this situation again a few years from now.

“Joe is the GM we’ve been searching for for years,” Johnson said. "I have a lot of faith in him. And if we can get this coaching hire right, and I think we will, I think we can be a team that no one is going to want to see on their schedule, even next year.

“And then we’ll see where we can go with that. But I see a very bright future with this team.”

Douglas and the Jets' next coach will have to make a decision on quarterback Sam Darnold, who is heading into the final year of his rookie deal. New York has until May to exercise the fifth-year option on his contract, but it's worth $25 million fully guaranteed.

And the Jets could opt to take a quarterback with the No. 2 overall pick in April.

“I want to be a Jet for life," Darnold said. “I want to turn this thing around. I believe we can.”

The 23-year-old Darnold was the No. 3 pick in 2018 and showed some positive signs in his three seasons, but he took a step back this season with nine TD passes and 11 interceptions. He still has a major supporter in Johnson, who said he's “a huge fan” of the quarterback.

“I don’t think the book has been written on him,” Johnson said. “He has a very bright future, and I personally hope that it’s on this team. ... But that decision is going to be made by Joe Douglas and our new coach."

One of the main themes Johnson and several players spoke about Monday was instilling a sense of identity, something they think the Jets have been lacking the last few years.

Defensive lineman Quinnen Williams said “identity, culture and process and standard all go hand in hand.” He referenced his college days at Alabama, and added that it's important for the next Jets coach to establish that.

Added center Connor McGovern: “Culture is everything. Culture beats talent every day of the week and I think when you look back at great teams, great dynasties, that’s what makes them actually great.”

Team owner Woody Johnson has been serving as the U.S. Ambassador to the United Kingdom since 2017 — leaving running the Jets to brother Christopher. Woody Johnson is expected to return to the U.S. later this month, but Christopher Johnson said his role will remain “significant” moving forward.

“When he does get back, whenever that is, he will, of course, have the final say on decision-making,” Christopher Johnson said. “But I’ll be an important adviser to him and a big part of what happens here.”