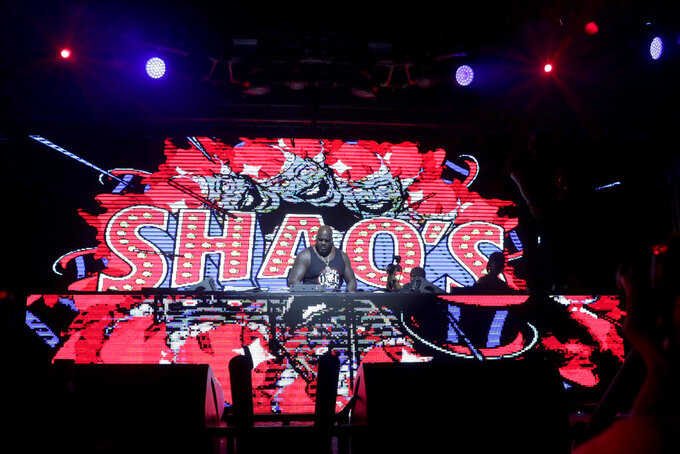 This time, O’Neal – who moonlights as DJ Diesel — will host his carnival-themed event “Shaq’s Fun House” on Friday night in Los Angeles ahead of the Super Bowl this weekend. His upcoming event — which features performances by Lil Wayne, Zedd and Diplo — will be held in-person after it was held virtually last year due to COVID-19 concerns.

O’Neal said he wants to bring “Fun House” back with a splash. The event will take place at the spacious Shrine Auditorium and Expo Hall, where several attractions will be built, including a human claw machine, Ferris wheel and 80-foot slide.

“Coming off of last year, where we retooled ‘Fun House’ to be a streaming virtual event, I think fans are even more excited to get back out there and celebrate,” O’Neal said. “We won’t disappoint them.”

Along with O’Neal’s event, the days leading up to the big game between the Los Angeles Rams and Cincinnati Bengals will include concerts from some of the biggest music stars in the world, including Justin Bieber, Miley Cyrus, Lil Baby, Blake Shelton and Usher.

Here’s a look at some of the events during a busy Super Bowl week:

John Mayer will have a more intimate setting at SiriusXM and Pandora’s Small Stage Series. The Grammy winner will headline the concert at the Hollywood Palladium on Wednesday evening.

The concert will be hosted by Andy Cohen, who will have a sit-down interview with Mayer to discuss his music and upcoming tour. Mayer will perform songs from his latest album, “Sob Rock.”

Scott Greenstein, president and CCO at SiriusXM, said he believes Mayer’s concert will be another indication that shows can be fun and safe at the same time. So far during the pandemic, Small Stages – which launched in August 2021 — has had some success with past performances by Alicia Keys, Ed Sheeran, Coldplay, H.E.R., Brandi Carlile and J. Cole.

“While this has been a rocky two years, I don’t think people will forget what they like,” Greenstein said. “You feel a little safer and better about it and you can enjoy yourself — that’ll be a win for me.”

Once the NFL Honors wrap up, many will flow into an exclusive and star-studded afterparty highlighted by a performance from Usher.

On Thursday night, the eight-time Grammy winner will hit the BET Network stage inside SoFi Stadium at The Canyons, an open-air location within the stadium’s footprint. Many of the guests – Hollywood celebrities, NFL Hall of Famers and team owners — will have an early look at the site of Super Bowl 56.

During the event, DirecTV will award a community organization a $25,000 grant award. Two other organizations, which focus on empowering youth through storytelling, will receive $5,000 each.

Halsey and Machine Gun Kelly will co-headline the first night of the Bud Light Super Bowl Music Fest on Thursday night. The three-night festival will celebrate its third year of existence at newly named Crypto.com Arena.

The follow-up night includes performances by Blake Shelton, Gwen Stefani and Mickey Guyton, who will sing the national anthem before Sunday’s big game. Green Day and Miley Cyrus will close out the festival on Saturday night.

Justin Bieber is expected to perform at the Homecoming Weekend pop up bash. The two-night event will kick off with Bieber on Friday night with a special deejay set by Marshmello at the Pacific Design Center in the heart of West Hollywood. On Saturday night, Drake will perform as a special guest. The invite-only event will host around 1,500 guests each night.

CeCe Winans, CeeLo Green, Natalie Grant and Lecrae are some of the musical performers who will grace the stage at the Super Bowl Gospel Celebration.

NFL Hall of Famer Deion Sanders will be honored with the Lifetime of Inspiration Award. Sanders, who is currently the head football coach at Jackson State University, is a two-time Super Bowl champion.

Comedian DC Young Fly and inspirational figure Sarah Jakes Roberts will host the event, where the theme is “Catch the Light.” Organizers want to highlight NFL players and their faith with uplifting “songs of joy.”

On Saturday night, Meek Mill along with Diplo and Gunna will perform at the Big Game Weekend Edition. Jack Harlow, Kygo and Frank Walker will headline the Sports Illustrated party the same night.

The Chainsmokers and Lil Baby will kick off the first night of the DIRECTV/Maxim party on Friday. The following night will feature Tiesto with 50 Cent as host.