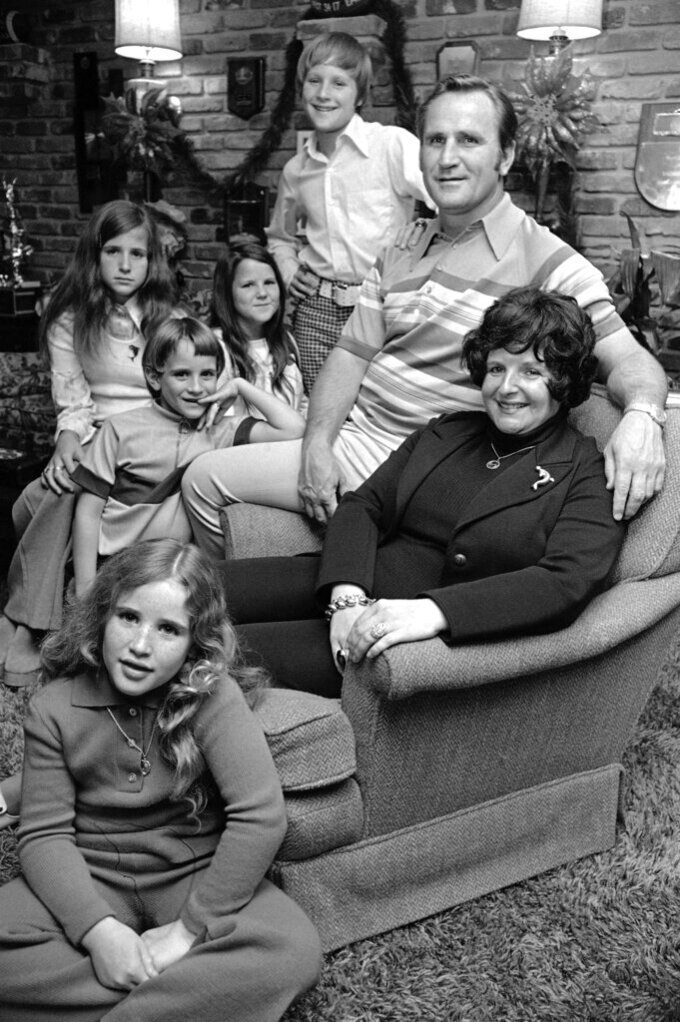 FILE - Miami Dolphins head coach and wife Dorothy Shula pose with their five children at their Miami Lakes home, Jan. 3, 1973, in Miami. In Miami Lakes, the town where Shula lived for years, a hotel, golf course and athletic club all once bare his name. (AP Photo/File)

MIAMI GARDENS, Fla. (AP) — There’s some symmetry in that Don Shula’s perfect 1972 season with the Miami Dolphins featured what was famously called the “no-name defense.”

Now 50 years later, Shula’s name is on just about everything.

There are Shula-branded steakhouses and burger places, even one inside Hard Rock Stadium, where the Dolphins play their home games. Dolphins fans can drive on the Don Shula Expressway. The best high school football coach in the country wins the Don Shula Award. There’s an annual Shula Bowl game between two South Florida universities. Football and other teams at his alma mater — John Carroll University in his native Ohio — play at Don Shula Stadium. In Miami Lakes, the town where Shula lived for years, a hotel, golf course and athletic club all once bore his name as well.

Those are all part of a massive Shula legacy — perfect season, most career wins in NFL history, and a name that still resonates deeply.

“I might have 10 interactions with people, and they might bring up 10 different things about my grandfather,” said Dan Shula, the grandson of the Dolphins legend, who died in 2020 at age 90. “It might be about playing on the golf course or spending a night at the hotel or going to the steakhouses, anything along those lines. It’s pretty cool.”

Of course, it all starts with football. The family is involved with many businesses, but football is clearly the family business.

Dave Shula and Mike Shula, two of the patriarch’s sons, coached in the NFL. Chris Shula, one of the grandsons, made it a three-generation family run in the NFL and was part of the staff that helped the Los Angeles Rams win the Super Bowl last season.

“My grandpa had a house in North Carolina and we would sit on the back porch, I was in high school, and we would talk football and talk sports and hang out," Chris Shula said. “I didn't even realize how special that was until you really look back, growing up in that family."

Dan Shula works for a medical supply company. When he introduces himself to anyone, he just sits back and waits for the inevitable question about his last name.

“It’s really just a matter of when it comes up,” Dan Shula said. “Because it’s going to come up. Some people catch onto it quicker than others. Sometimes I play a game with myself, ‘How long will it be until they ask?’”

And they always ask.

“I’ve never met anyone else with that last name,” he said.

He’s never met anyone outside the family linked to a man with 347 coaching wins, two Super Bowl victories and one perfect season, either. Because, on that list, Don Shula is one of one.

“He impacted coaching globally, not only South Florida, but everywhere,” Cristobal said. “And that name, when you say that name — and I know his family really, really well — it’s powerful because of work done and time invested. We’re all very grateful and thankful for his contributions and his guidance and his mentorship and leadership.”

Larry Little was an offensive lineman for the perfect 1972 team, which will be honored this weekend with a 50th anniversary celebration punctuated by a Sunday night game between the Dolphins and Pittsburgh Steelers.

“He is South Florida,” Little said.

He is the Dolphins, too.

And McDaniel doesn’t hide that when you’re around the Dolphins, especially as a coach in Miami, you feel Shula. There's photos of him everywhere. He has a statue in his honor. Some legends fade over time. With the Dolphins, Shula has not.

“It’s kind of in the narrative,” McDaniel said. “And that’s what’s unique about that team, is that it carries annual credence when everyone fails to duplicate what they did. ... And one thing that I think is something that each and every player in the league and every team — but most importantly this team — understands is what one year and one team can do, the ramifications that you can have for the rest of your life.”

But 1972, and perfection, made his name immortal. One of one.

“It’s been a long time since he last coached,” Dan Shula said. “But it just goes to show you the magnitude of what he was able to accomplish during his time coaching, and the way he did it. He did in a way that everybody respected. There’s nothing you can say about him, except respect the work that he did and just the consistency that he had year after year, and that’s what lives on.”