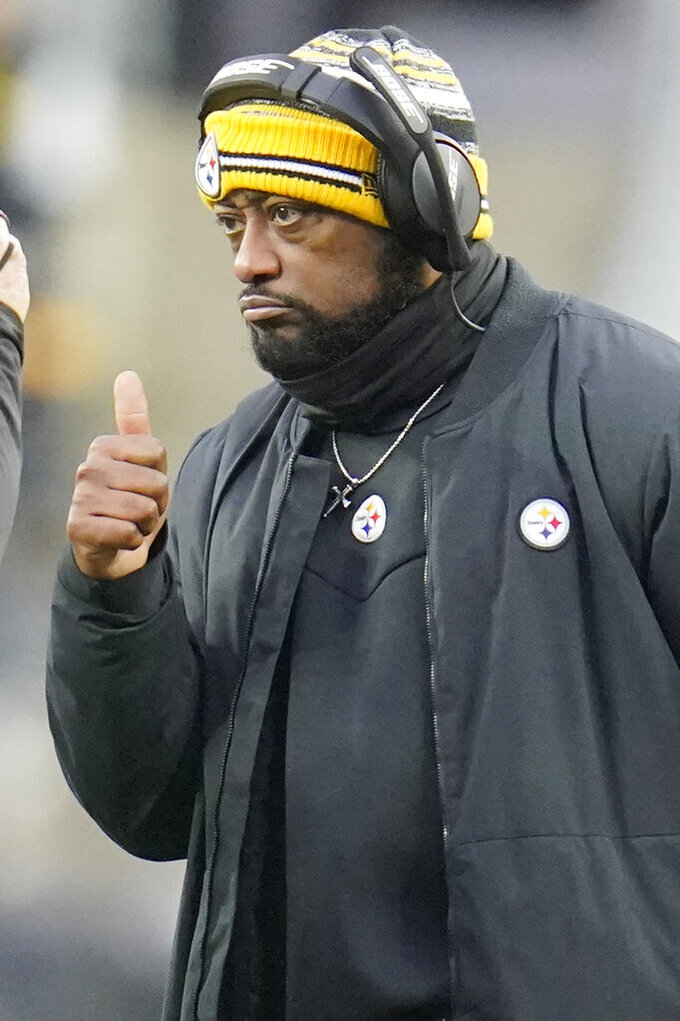 Pittsburgh Steelers head coach Mike Tomlin gives a thumbs-up as his team plays against the Tennessee Titans during the second half of an NFL football game, Sunday, Dec. 19, 2021, in Pittsburgh. (AP Photo/Gene J. Puskar)

And yet they're still here, still in the mix with three games remaining after a mystifying 19-13 win over Tennessee on Sunday in which they were pushed around for the better part of three hours only to escape by providing the kind of “splash” plays on defense that can cover up a lot of warts, of which they still have many.

Four turnovers led to four Chris Boswell field goals. Joe Haden returned from a month on the sideline with the game-sealing tackle in the final seconds. The offense managed all of 168 yards, failed to score a first-half touchdown for the fourth straight game and managed all of 35 yards rushing.

And none of it mattered.

“I think we still have a pulse in this thing,” quarterback Ben Roethlisberger said.

Not just a faint one.

Most years, being 7-6-1 at Christmas usually means it’s time to start planning for next season. In 2021, it means you've got a shot. The Steelers woke up Monday a half-game back of first in the underwhelming and unpredictable AFC North.

Maybe that's a testament to the blah-ness that has engulfed nearly the entire AFC. Still, Pittsburgh has consistently found a way to find a way when it absolutely needed to.

A blocked punt to spark a rally against Buffalo in the opener. A strip-sack by all-everything linebacker T.J. Watt to set up an overtime victory over Seattle. A game-saving swat by cornerback James Pierre against Denver. Two fourth-quarter touchdowns to stun Baltimore.

The Steelers don't have enough talent to overwhelm opponents. And when it's not close, it's not close. Their six losses have come by an average of 12.6 points. In the past month alone they've found themselves trailing in the second half by 17 (Los Angeles Chargers), 38 (Cincinnati) and 29 (Minnesota).

No wonder coach Mike Tomlin sounds more relieved than optimistic while talking about his erratic group. Asked why pre-snap penalties keep cropping up 14 games in and he gruffly responded “because we've got issues.”

They've also — stunningly — got a chance.

“It’s better to win and learn than lose and learn at this point,” defensive end Cam Heyward said. “But there’s a lot we can improve on.”

When the Steelers can force teams to pass — hardly a given for a team that's ceding yards on the ground at rate not seen in 30 years — they remain dangerous. Tennessee piled up 201 yards rushing, but also bafflingly kept asking quarterback Ryan Tannehill to throw the ball. That opened up rush lanes for Watt — whose 17 1/2 sacks are a franchise record — and led to three of the Titans' four turnovers.

“I feel like if teams want to try and throw the ball, they also know the problems they are going to get from us,” Watt said.

First-year offensive coordinator Matt Canada is struggling to come up with a game plan that produces any sort of early momentum. The Steelers have failed to score a first-half touchdown in four straight games, the first time that's happened in more than a quarter century.

While Canada is dealing with an offensive line that is among the most inexperienced and ineffective in the league, he's also been unable to find a way to successfully mask the unit's deficiencies.

Charlton and fellow outside linebacker Derrek Tuszka have seen their playing time fluctuate as starters Watt and Alex Highsmith have battled injuries. Both made an impact against the Titans. Charlton's tip set up the pick that produced the go-ahead field goal and Tuszka's first career sack on Tennessee's final drive pushed the Titans into a long-yardage situation that ultimately ended two plays later with Joe Haden stuffing Tennessee wide receiver Nick Westbrook-Ikhine inches short of a first down that would have extended the game.

The Steelers used a seventh-round pick to take punter Pressley Harvin III. While Harvin has excelled while working as a holder for the first time in his football career, he has been wildly inconsistent while doing his main job. He had punts of 32 and 27 yards against the Titans and outkicked his coverage on a 51-yarder that set up Chester Rogers for a 55-yard return.

Plus-8 — Pittsburgh's turnover differential in its seven wins. The Steelers are minus-6 in their other seven games.

Try to take their smoke-and-mirrors act on the road to Kansas City next Sunday. The Steelers have dropped three straight away from Heinz Field.