Off sofa, Browns' Stefanski to return after playoff absence 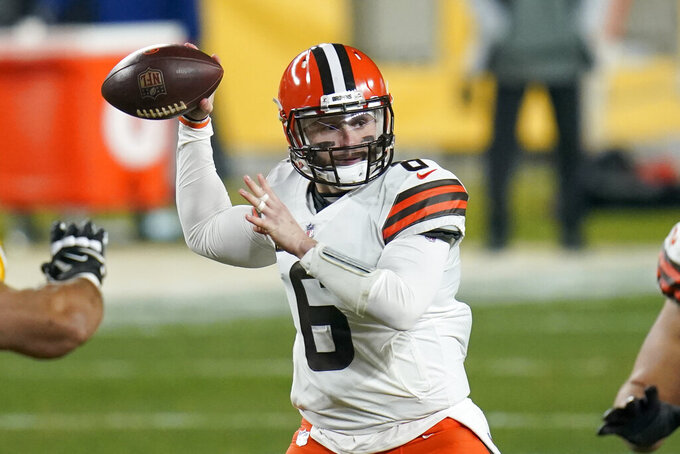 Cleveland Browns quarterback Baker Mayfield (6) throws a pass during the first half of an NFL wild-card playoff football game against the Pittsburgh Steelers, Sunday, Jan. 10, 2021, in Pittsburgh. (AP Photo/Keith Srakocic)

CLEVELAND (AP) — Nervously sitting in front of a TV while secluded in his basement at home, coach Kevin Stefanski watched his Browns' shocking playoff win — the team's first in 26 years — like one of the team's many long-suffering, faithful fans.

From the sideline to the sofa.

His phone turned off, Stefanski, who was isolated from his team and family after contracting COVID-19 last week, felt helpless, torn as he paced.

“I don’t plan on doing that again,” he said.

Stefanski expects he won't have to, and Cleveland won't have to wait another generation between postseason appearances.

The Browns' strange 2020 season, which outkicked being bizarre a while back and has rolled into a new year, continues They're one of four teams left in the AFC with a matchup set for Sunday against the reigning Super Bowl champion Kansas City Chiefs.

Given little chance without their coach, several key players and unable to practice much last week, the Browns pulled off a stunning, 48-37 wild-card win at Pittsburgh that exorcised years of failure and painful frustration against their rivals. Perhaps it kicked off a new era for a franchise that means more to its city than many in the NFL.

When the Browns arrived back in Cleveland at around 3 a.m. Monday, their plane was welcomed at the airport by barking, chanting fans.

"We have to keep it going,” said Stefanski, who anticipates returning to the team's facility on Thursday.

Naturally, the Browns missed having their rookie coach while playing their first playoff game since the 2002 season. Stefanski's steadiness has been instrumental in keeping his players on task and focused during the pandemic.

They've bought in to Stefanski's team-above-all message, which isn't unique. But it's one that has been re-enforced during a season when injuries have forced the Browns to count on players who began the year buried on the depth chart or elsewhere.

Cleveland's offensive line depth is so decimated by injuries — and Pro Bowler Joel Bitonio being out with COVID-19 — that during the nerve-racking fourth quarter as the Steelers rallied, the left guard was Blake Hance. He spent 16 weeks on the Jets' practice squad before the Browns signed him in an emergency last week.

Quarterback Baker Mayfield introduced himself to Hance in the locker room before the game.

Stefanski hopes to do the same soon.

"I am looking forward to it,” Stefanski said.

He's also eager to get back to coaching his team after a stomach-churning night as a fan.

However, before he watches his next game, Stefanski might want to brush up on his remote skills.

He admitted that at the moment when the Browns jumped to a quick lead — and began a turnover avalanche with safety Karl Joseph's TD fumble recovery in the end zone after the Steelers' first snap from center sailed over quarterback Ben Roethlisberger's head — Stefanski was seeing something different.

"I guess that my feed for whatever reason — I must have hit pause or something — was about 45 seconds behind,” he confessed. "I heard my kids going crazy upstairs so I had an inkling something good was going to happen.”

Something good is happening in Cleveland.

Just about everything went right as the Browns ended their 17-game losing streak in Pittsburgh.

Cleveland’s defense forced five turnovers, including three in the first quarter, while building a 21-0 lead.

Also, taking over Stefanski's play-calling duties, offensive coordinator Alex Van Pelt kept the Steelers off-balance with a mixture of formations. The Browns were expected to run the ball more, and even with the big lead, Van Pelt kept Mayfield firing.

Without top cornerback Denzel Ward and part-time starting CB Kevin Johnson, both out with COVID-19, Cleveland's secondary got torched for 501 yards and four touchdowns by Roethlisberger. He took advantage of the Browns' decision to play softer coverage while nursing their lead.

Patrick Mahomes could be licking his lips.

Mayfield has delivered on his promise to change the Browns. Have there been ups and downs during his three seasons? Plenty. But Mayfield's fiery personality fuels his teammates, and when the momentum was swinging back to the Steelers, he r ipped it away with quality throws.

Hard to find much to criticize when a team missing so many parts pulls together for the biggest win in the franchise's expansion era.

If there is one thing to nitpick, it's defensive coordinator Joe Woods opting not to blitz Roethlisberger more often.

All-Pro right tackle Jack Conklin is day to day with a hamstring injury that knocked him out in the first half. Conklin was questionable going in with an “illness.” ... Guard Michael Dunn, who started for Bitonio, is also day to day.

8 — The consecutive playoff losses on the road before the Browns ended the streak with their first win outside Cleveland since 1969.

A first playoff meeting between the Browns well-rested, top-seeded and heavily favored Chiefs. Cleveland will likely spend another week hearing it can't win.

The Browns haven't won twice in the same postseason since 1950, their inaugural NFL campaign.