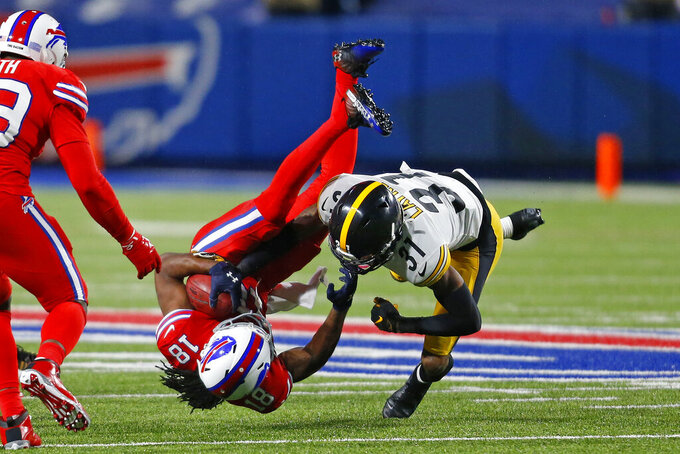 PITTSBURGH (AP) — Ben Roethlisberger's not deaf. He's not blind, either. The Pittsburgh Steelers quarterback hears the criticism — from his coach, from fans, from the media — after two straight losses in which his team found itself getting bullied at times.

“There’s a lot of outside noise and deservedly so,” Roethlisberger said Wednesday. “We haven’t played well. We’ve lost two in a row. The fans are getting anxious. The talking heads are doing what they are supposed to do and talking bad about us and all that stuff.”

The tape doesn't lie. The Steelers (11-2) have topped 50 yards rushing just twice in their past seven games, an imbalance that has placed an increasingly heavy burden on Roethlisberger. The injury-ravaged defense allowed Buffalo to grind out the final 7:11 of the fourth quarter on Sunday night to salt away a 26-15 victory that never felt in doubt in the second half.

Being on the wrong side of a beatdown isn't something that happens terribly often in Pittsburgh. Yet coach Mike Tomlin — unprompted — essentially called out his team for getting away from its historical identity. While Roethlisberger is aware it's easy to focus on the offensive and defensive lines when looking to place blame, he believes it extends to all 53 men on the roster.

“Physicality isn’t just about the line,” Roethlisberger said. “People just think that’s where it is, but really it’s about picking up blitzes. It’s about getting the tough yards. It’s about blocking the perimeter, things like that. Sometimes physicality is mental, too. You have to be mentally tough.

"All those things combined, I think we can hopefully turn this thing around, and we can hit the plays that are there to be had.”

Tomlin hinted at having his players put on the pads this week in an effort to bring a sense of urgency that has been lacking of late. It can be a delicate balance, particularly in mid-December, particularly for a team that isn't exactly young up front on either side of the ball. Three offensive line starters are in their 30s. So are two of the three starting defensive linemen. The mileage starts to add up this time of year.

Longtime defensive captain Cam Heyward's solution: practice like you want to play. That means going all out in non-contact drills in hopes of emulating what awaits in the stadium.

Something Pittsburgh hasn't done much of recently. The signs of slippage were there far before their 11-0 run to start the season ended with an upset loss to Washington at home on Dec. 7.

They slogged through a victory in Dallas in which they needed to rally in the second half against Cowboys fourth-string quarterback Garrett Gilbert. They weren't exactly sharp while beating lowly Jacksonville, trailing early and not really putting the Jaguars away until the fourth quarter. Their thrice-delayed showdown with the COVID-19 depleted Ravens was so uninspiring Tomlin lashed out at them for “sucking.”

Amid all the unease, the Steelers can still clinch the AFC North title with a victory next Monday against lowly Cincinnati. They also have time to get it together before the playoffs start. They'll have to do it, however, with an offensive line that lost left guard Matt Feiler to a season-ending pectoral injury against Buffalo. Backup Kevin Dotson is dealing with a shoulder issue and right tackle Chukwuma Okorafor has an ankle problem.

That's why Roethlisberger stressed getting back to some semblance of “The Steeler Way” isn't solely reliant on the guys up front.

“As runners, sometimes there’s a guy in the hole, an unblocked guy. You have to put your head down and get the tough 1 or 2 yards,” he said. “Sometimes receivers have to put their head down instead of stepping out of bounds and get those tough kind of yards. It’s not everybody, but collectively, we all need to be more physical.”

It's something wide receiver JuJu Smith-Schuster has done since he entered the league in 2017, when he famously laid out former Cincinnati linebacker Vontaze Burfict with a blindside (and ultimately illegal) hit later made into a T-shirt sold near the entrance to Heinz Field. Smith-Schuster tried to give his team a lift against Buffalo when he lowered his shoulder and collided with Bills linebacker Tremaine Edmunds on a drive that ended with a third-quarter touchdown.

“I can tell my receivers, ‘Let’s be physical,’ but at the end of the day I have to go and show them,” Smith-Schuster said.

An example Smith-Schuster's teammates know they have to follow in the coming weeks if Pittsburgh wants to prevent its current lull from becoming something far more catastrophic to its season.

NOTES: Smith-Schuster has no plans to drop his pregame ritual of dancing on the midfield logo. He began the ritual earlier in the season, much to the delight of his significant social-media following. The Bills viewed it as a sign of disrespect and said as much afterward. Not that Smith-Schuster seems to care. “I'm not going to stop doing it,” he said.