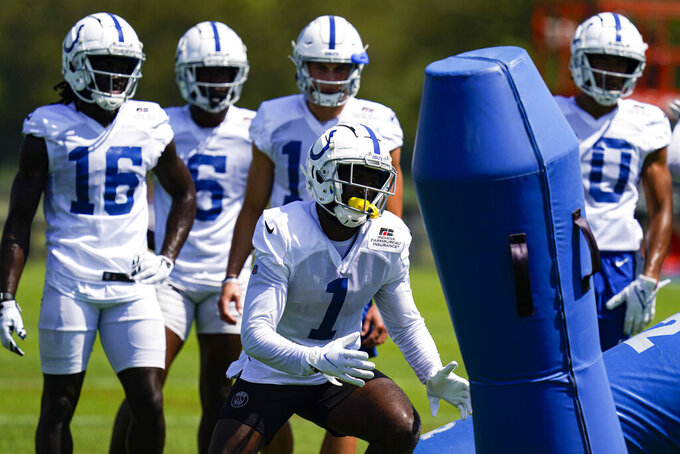 Yes, the speedy, versatile receiver feels healthy and, yes, he believes he can finally deliver a long-promised breakout season with the Indianapolis Colts.

But every time he hits the ground at training camp, fans anxiously watch and wait. Three injury-shortened seasons cause that kind of concern outside the locker room, especially when it's a player the Colts desperately need this season.

“Some of those injuries, guys don't come back from," Campbell said. "I feel so blessed because not everybody gets an opportunity like this. My career, thus far, hasn't been what I wanted it to be. But every time I take the field, I never take it for granted because I know how fast it can be taken away. I've experienced it.”

Indy drafted the former Ohio State star in the second round, envisioning him as a complementary piece to four-time Pro Bowler T.Y. Hilton. They expected Campbell to be a playmaker out of the slot, after the catch and as an occasional run option — the perfect skillset for coach Frank Reich's offense.

But the injuries hit with a furious flurry.

As a rookie, he hurt his hamstring in training camp and fought his way back from midseason sports hernia surgery to play one more game before landing on season-ending injured reserve with a broken foot.

The next year proved equally difficult.

He missed part of training camp with a concussion from a traffic accident. Then, five quarters into the season, Campbell was carted off the field with what was later diagnosed as a torn posterior cruciate ligament in his left knee. Campbell's season was over.

He returned last season with a new number, No. 1, hoping it would help him finally flip the script.

Campbell missed only one of the first six games because of an abdominal injury and appeared to be getting into a groove when he hauled in four catches for 56 yards in Week 5. Then it happened again — on a 51-yard touchdown catch in Week 6 at Houston.

Campbell missed 10 more games before returning for the Colts' embarrassing, playoff-eliminating loss at Jacksonville. He didn't even catch a pass.

His three-year totals: 34 receptions, 360 yards and two touchdowns in 15 games.

It's been as painful for the Colts to watch as it has been for Campbell to explain and endure.

“The stuff he’s had has been kind of freakish,” Reich said. "I told him we’re behind you and will give you everything you need but you have to go earn it.”

Though he sat out Monday's practice with a sore hamstring, Campbell has been impressive at camp.

Fans, including his mother, have cheered and shouted his name as he's made acrobatic catches and appeared fearless over the middle. And Campbell has been quick to show everyone the speed and hands that convinced Indy's brain trust to draft the guy who helped lead the Buckeyes to a national championship and attended the same high school as LeBron James.

But now the stakes increase.

With Hilton no longer around and Michael Pittman Jr. the only proven receiver at camp, the Colts need Campbell to stay healthy for his fourth and possibly final season in Indy.

They need him to produce solid numbers, teach younger receivers such as second-round pick Alec Pierce and finally deliver on his promise.

“He’s got speed, he’s strong with the ball. Every time he touches it, he’s a breakaway threat," Reich said. “Parris is also real smart. I think it’s a good combination. Parris is doing a good job so far.”

He contends his best performances come when he's under pressure and that he's not worried about getting hurt again. His family helped him survive the past three years and now it's Campbell turn to demonstrate the payoff, regardless of what others think.

“From the outside looking in, people are like ‘Oh, he can’t stay healthy.’ Excuse my language, but to hell with that,” Campbell said. "I know what type of player I am, I know why I was drafted here. This staff, they know I’ve been through a lot, but they know what kind of player I am as well.”