Somber Bills seek urgency to turn around from recent slump 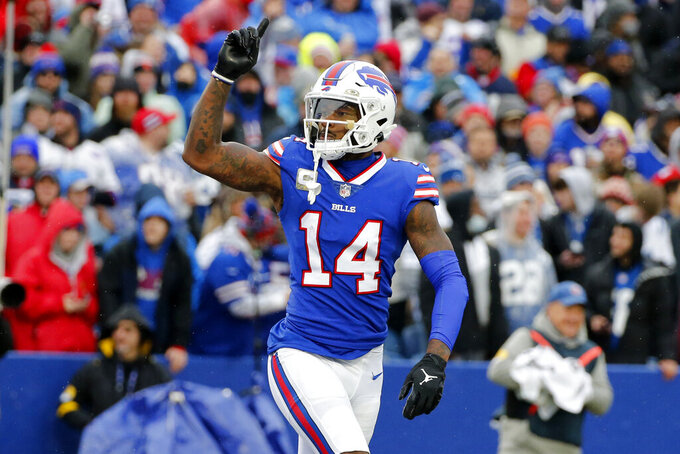 ORCHARD PARK, N.Y. (AP) — With things going from bad to worse, the Buffalo Bills don’t have much time to regroup ahead of their next game.

In their eyes, that’s a good thing.

“I think it’s very fortunate that we have a Thursday night game that we have to turn our attention to,” quarterback Josh Allen said.

Wiping the slate clean might be a good idea for the Bills, who have gone from an expected Super Bowl contender to a team in crisis in recent weeks. Buffalo (6-4) is coming off its worst performance of the season, a 41-15 loss to Indianapolis, and must quickly move on with a game against the New Orleans Saints on Thanksgiving night.

Bills coach Sean McDermott described the mood as “somber” at the team’s facilities on Tuesday. But instead of letting frustration sink in, the Bills say they have an added sense of urgency to steer the ship back on course.

“I’d say focused,” Allen said. “You can’t feel sorry for yourself, you can’t let one week affect another week. ... We’ve got to go out there, we’ve got to execute and try to get back to who we are.”

The Bills certainly haven’t looked like themselves in recent weeks, which includes a 9-6 loss to the struggling Jacksonville Jaguars in Week 9. And it’s not as simple as fixing one problem area.

The most pressing issue is Buffalo’s run defense. The Bills entered the game against Indianapolis with the league’s top-ranked defense but surrendered 264 yards on the ground, the highest total allowed by them since 2017, and had no answers for the Colts’ smash-mouth attack. Running back Jonathan Taylor had five touchdowns, the most scored by a Bills opponent in a single game.

Buffalo may get middle linebacker Tremaine Edmunds back against the Saints. Edmunds missed the previous two games with a hamstring injury; he was a full participant at practice on Tuesday. There was no update on nose tackle Star Lotulelei, who remains on the COVID-19 list. Lotulelei has also missed the past two games.

New Orleans has one of the most potent combinations in the league at running back with Alvin Kamara and Mark Ingram, but both players are question marks for Thursday. Kamara and Ingram are dealing with knee injuries and neither practiced Tuesday.

“We know what we have to get done this week. It’s going to be more of the same,” defensive coordinator Leslie Frazier said. “It’s a copycat league and this team is going to come in and try to run the football, and we’re going to have to respond correctly, otherwise it will continue.”

On offense, the Bills have been unable to unleash the pass-happy attack that made them so successful last season and earlier this season. Opposing teams have been keeping their safeties deep in coverage to take away explosive plays downfield. Buffalo’s offensive line has also had issues as of late. The Bills want to get back to what they do best, however, no matter the opponent’s game plan.

“As far as being aggressive, you don’t want to stop being you,” receiver Stefon Diggs said. “You don’t want to go into a shell of being conservative ... play ball, play free, and be you. Play with that confidence, cause that’s our team.”

Penalties and special teams miscues have also hurt the Bills in recent weeks. There is the potential for one lineup change on special teams. Rookie Marquez “Speedy” Stevenson practiced for the first time all season on Tuesday; Stevenson began the season on injured reserve. He could be an option in place of Isaiah McKenzie, who had a critical fumble deep in Bills territory in the loss to the Colts.

A sixth-round pick out of Houston, Stevenson was known for his abilities in the return game in college.

“Everything’s on the table at this point,” McDermott said when asked about a potential appearance by Stevenson.

Two years ago, the Bills arrived on the national stage with a statement win on Thanksgiving over the Dallas Cowboys. This year, with a difficult stretch of games against New England and Tampa Bay coming up after the holiday, they might need a win to save their season.

“I think every game we play, we look at it as a must win,” Allen said. “Thursday night, Thanksgiving, prime-time game, all that stuff is, in my opinion, minutiae. We’ve got to turn our focus and try to execute. That’s it.”