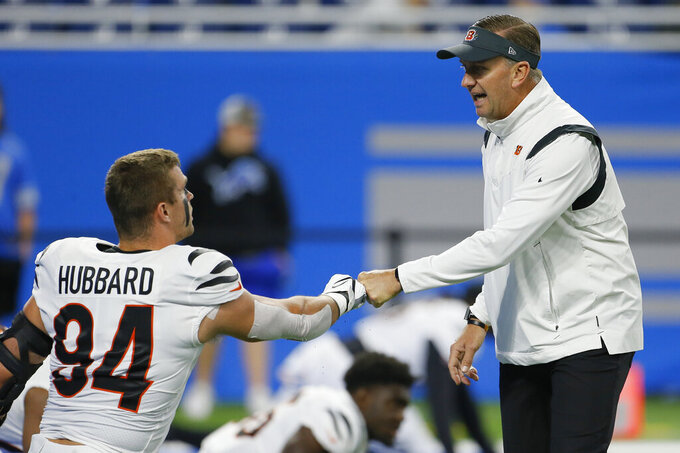 FILE - Cincinnati Bengals special team coordinator Darrin Simmons fist-bumps defensive end Sam Hubbard before the team's NFL football game against the Detroit Lions on Oct. 17, 2021, in Detroit. Simmons arrived with the team in 2003 and has been a model of stability. He has had the same punter/holder and long snapper since 2009, which also helped in the development of kicker Evan McPherson. (AP Photo/Duane Burleson, File)

LOS ANGELES (AP) — If anyone can speak about the highs and lows of Cincinnati Bengals football it is Darrin Simmons. He has had a front row seat in 19 seasons as special teams coordinator.

Ever since Cincinnati beat Kansas City on Jan. 30 to secure its first Super Bowl appearance in 33 years, Simmons has been trying to break down the Los Angeles Rams' coverage and return units. But he's also reflected on the journey to finally get here.

“I have had to pinch myself a lot of times,” said Simmons, who has the current longest tenure with one team as a special teams coach. “It has been quite a journey. These last three weeks have been a long time coming, to say the least. I’m excited to be here. I really relish the opportunity to be a part of this big game.”

Simmons arrived in 2003 after Marvin Lewis was hired as head coach to turn around a franchise that had experienced 12 straight losing seasons. Lewis would lead the Bengals to seven postseason trips in 16 seasons, but they could never break through with a playoff victory.

After Cincinnati went 6-25-1 during Zac Taylor's first two seasons, Cincinnati's road to a playoff spot appeared tougher than ever. But the Bengals have been one of the NFL's best stories of the past 10 years.

The Bengals won the AFC North with a 10-7 record, broke a 30-year playoff win drought in the wild-card round against Las Vegas before getting the first two road postseason victories in franchise history against Tennessee and Kansas City to advance to the Super Bowl.

Simmons has been able to enjoy this ride accompanying two players with the longest tenure on the Bengals — the ones he spends the most time with. Punter Kevin Huber was a fifth-round pick in 2009 and long snapper Clark Harris was signed five weeks into that season.

That familiarity has paid dividends this year after kicker Evan McPherson was drafted in the fifth round. McPherson has been perfect on all 12 attempts during the playoffs and had winning field goals against the Titans and Chiefs.

“They’re really an extension of me, I feel like they’re coaches on the field,” said Simmons of Huber and Harris. "For them to get to this point in their career and get the opportunity for all of us to be in this game together is pretty cool.

“They’ve been a big help to Evan. I think in his development, they keep him calm and cool.”

After 16 seasons on Lewis' staff, Simmons has been able to get a different perspective with how Taylor runs the team. Simmons said that while Lewis was more of an old-school guy who didn't call plays, Taylor is calling the offense, managing in-game situations, and trying to manage the entire team.

“It’s unbelievable how he can manage all that and shows his capacity. It’s been really neat to be a part and see all that, but it’s unbelievable the way that he deals with the players and the level of confidence that he brings to our guys,” Simmons said of Taylor. “He’s really made great strides from 2019 to now. It's been a credit to him how he's really evolved and developed.”

Huber has also seen Simmons evolve, seeing Simmons become a little more sedate on the sideline instead of being the fiery personality that took each penalty personally.

“There’s probably no one in the building that puts more time and effort than him. Year in and year out, he’s got a great special teams unit that’s respected around the league,” Huber said.

Simmons and the kick teams will be in for a battle Sunday against the Rams, who also have one of the league's top units. Punter Johnny Hekker is sixth in gross average, while kicker Matt Gay has as big a leg as McPherson.

“They do a lot of unorthodox things that are different. They challenge you in a lot of different ways," Simmons said. "It’s a unique set of schemes that are probably different than really anybody in the NFL. But they’re playing very well right now.”