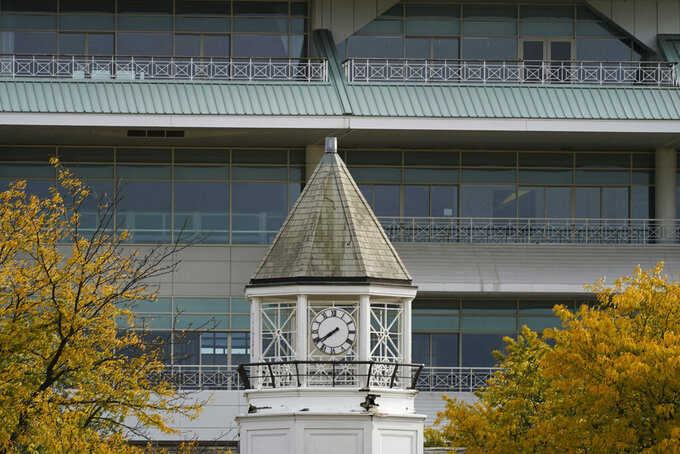 The grandstand at the shuttered Arlington International Racecourse is seen from parking lot in Arlington Heights, Ill., Friday, Oct. 14, 2022. The Chicago Bears want to turn the Arlington Heights site, once a jewel of thoroughbred racing, into a different kind of gem, anchored by an enclosed stadium and bursting with year-round activity — assuming a deal with Churchill Downs Inc. to buy the land goes through. (AP Photo/Nam Y. Huh)

ARLINGTON HEIGHTS, Ill. (AP) — The hulking grandstand at the shuttered Arlington International Racecourse casts an eerie shadow as the sun sets on a weekday evening. It sits dormant on a tract of land that could be transformed in a major way.

With the galloping horses long gone, the Chicago Bears see 326 acres of opportunity. The Buffalo Bills also are making plans for a new home. Same for the Tennessee Titans and baseball's Kansas City Royals. Major League Soccer's Inter Miami is working on its new place, and on and on it goes.

When it comes to construction for sports, today’s economic uncertainty is nothing compared to the lucrative promise of tomorrow. Interest rates, inflation and supply chain issues factor into the plans, according to construction and financing experts, but they haven’t been standing in the way.

“The best time to build is now, not two years from now,” said Dan Wacker, director of pre-construction for Mortenson’s sports and entertainment division, which counts Minneapolis’ U.S. Bank Stadium and Las Vegas’ Allegiant Stadium among its recent major projects. “If you can make that happen.”

The key to any development is understanding what the market can bear when it comes to spending, which already factors in inflation — "a manageable risk factor,” according to Scott Zolke, a lawyer with an extensive sports background who represents the Bills in stadium talks.

“One of the things that we exhausted in our analysis of Buffalo was ‘What if?’” he said.

“What about inflation? What if we go into a recession? What if ... the supply chain is completely flipped upside down?” Zolke added. “You look at the best, worst, middle-case scenarios, do your comparisons ... and then you say, is it worth it?”

Teams continue to say yes during what looks like an imposing time for massive construction projects. Even amid a tentative easing of inflation in October, the Federal Reserve likely will continue raising interest rates to cool the economy.

While teams are taking the current economic climate into consideration, it hasn’t been a deal breaker.

“I have not yet seen decisions change on whether to do a project or not do a project because of the cost,” said Bill Mulvihill, managing director and head of the Sports Finance Group at U.S. Bank, which helped finance the Los Angeles Rams’ SoFi Stadium. “It’s just more changing how are we going to fund this, how much is it going to cost rather than changing are we going to do this or not?”

The Bears want to turn the Arlington Heights site, once a jewel of thoroughbred racing, into a different kind of gem, anchored by an enclosed stadium and bursting with year-round activity — assuming a deal with Churchill Downs Inc. to buy the land goes through.

They envision restaurants, retail and more on the plot of land some 30 miles northwest of their longtime home at Soldier Field — all for about $5 billion, with some taxpayer help.

They’re not the only team with their eyes on new digs. The Bills are finalizing a deal with state and county governments to build a $1.4 billion stadium, and the Titans recently lined up the last financing for an estimated $2.1 billion domed home.

In Buffalo, it took years of prodding, fears of relocation, numerous studies, a change in ownership and delays caused by the COVID-19 pandemic to finally reach the conclusion the Bills needed a new facility to replace the stadium they’ve called home since 1973.

For the most part, when it comes to new stadiums and ballparks, owners are playing the long game, knowing they figure to profit even if prices are a bit haywire at the moment.

The costs of materials have surged 35.7% since January 2020, according to the National Association of Homebuilders. Concrete went from a 30-year low in 2009 to the largest jump and highest price this year since 1989.

The supply chain issues have led to a juggling act when it comes to choosing materials. When steel has been in short supply, for example, there’s been a run on concrete. That in turn has led to supply-and-demand issues there, said Logan Gerken, vice president and general manager of Mortenson's sports and entertainment division.

If teams are scaling back on design, they’re doing so in ways fans probably wouldn’t notice — like fewer TVs in suites, Mulvihill said. But when it comes to big-ticket items? They’re not sacrificing a retractable roof for a fixed roof or no roof at all just to save money.

Though the framework of the Bills’ deal calls for what in March was an NFL-record $850 million taxpayer price tag (and likely to be topped by the Titans proposal), government funding can be tough to secure.

Take what’s happened in Oakland, where baseball’s Athletics could leave without a new stadium. The city, which secured $321.5 million in grant money toward a $12 billion stadium and waterfront project, was scrambling for more to help cover potential infrastructure cost overruns and keep the team in town.

The Bears plan to pay for their stadium, but want taxpayer dollars to cover infrastructure costs such as roads and sewers to develop the site.

There are differences to take into account when developing in large markets, versus smaller ones. While the development around Los Angeles’ SoFi Stadium and what the Bears envision at Arlington Heights will bring in additional revenue, Buffalo’s small population base and drawing power for visitors played a major factor in the Bills’ projections and a larger reliance on public funding.

In Nashville, the public funding commitment can be larger because the region can bank on recouping the money by creating yet another attraction to lure even more visitors to Music City, including the potential of hosting a Super Bowl.

That’s not the case in Buffalo, despite the draw of nearby Niagara Falls and being home of the chicken wing.

Top of mind when it comes to any development project, Zolke said, is teams being comfortable with the return on investment over the long-term, which to a degree de-emphasizes the impact of inflation.

“This is a long-term investment. You’re not going to cash in in five years,” Zolke said. “You’re not flipping a house.”

Wawrow reported on this story from Buffalo, New York.