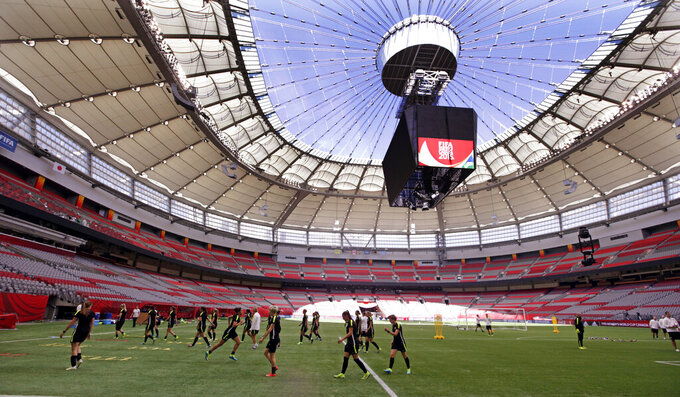 FILE - U.S. players run drills during a practice for the Women's World Cup soccer final under the open roof of BC Place in Vancouver, British Columbia, Canada, Saturday, July 4, 2015. There are 23 venues bidding to host soccer matches at the 2026 World Cup in the United States, Mexico and Canada.(AP Photo/Elaine Thompson)

JEFFERSON CITY, Mo. (AP) — U.S. cities and states have lined up with tax breaks and millions of dollars in both public and private investments for a chance at hosting 2026 FIFA World Cup games, set to be announced Thursday.

The prize is a share of what FIFA expects to be more than $5 billion in short-term economic activity generated from the tournament throughout North America.

In hopes of scoring a deal, state lawmakers and city leaders are cutting sales taxes on tickets and pumping millions of dollars into stadium renovations.

Missouri is among a handful of states that preemptively passed a bill to exempt FIFA tickets from sales taxes. Kansas City-area Democratic state Sen. John Rizzo said he expects revenue generated from Kansas City hosting the event to “more than offset” any losses on sales taxes for tickets.

“There are a lot of excited soccer fans that are hoping that we can get this done,” Rizzo said. “I’m hopeful, too.”

Seventeen stadiums in 16 areas remain in contention to be among 10-12 selected from the U.S. for the tournament, which will be co-hosted with Mexico and Canada. The U.S. will host 60 of the 80 games under FIFA’s plan, including all from the quarterfinals on, and there was little doubt over the venues for 10 games each in the other nations.

FIFA's calls for tax breaks and other funding assistance led cities including Minneapolis, Chicago and Glendale, Arizona, to drop out of the running in 2018.

The Republican governors of Georgia and Florida in May signed legislation eliminating sales taxes on tickets for World Cup soccer matches.

Missouri lawmakers sent similar legislation to Republican Gov. Mike Parson last month. He has not indicated whether he'll sign it.

“I know there's probably some people out there that are like, why are we doing that?” Rizzo said. “The reason for that is in the past, there have been other places that have hiked the sales tax on the tickets just before they went on sale.”

Tickets to sporting events aren’t subject to sales tax in Ohio, although Cincinnati, which is vying to be named a host city, is among municipalities that subjects them to a local admissions tax.

Alan Rothenberg, head of World Cup USA 1994, anticipates many of the U.S. states and cities will refuse to comply with FIFA's demands for ticket tax breaks.

“I think that’s a fair assumption in most of the jurisdictions," he said. "Some of them, they may just build it into the stadium price and other things, but getting an actual waiver may be difficult. Ultimately, it just means another cost that the host committee, host city, is going to be responsible for.”

Other states and cities have either cobbled together private funding or are pulling from designated public funding set aside specifically to attract large events.

Georgia also appropriated $250,000 in the budget beginning July 1 for security if Atlanta wins a bid. Money from hotel taxes collected by the Atlanta Convention and Visitors Bureau also could be used to support the bid.

In April, Maryland Gov. Larry Hogan signed a bill to increase bond authorization for M&T Bank Stadium, home to the NFL's Baltimore Ravens and a proposed World Cup site. The bill allows borrowing of up to $600 million, up from a current cap of $235 million.

In Cincinnati, Ohio, officials have pledged $10 million for soccer-specific upgrades to Paul Brown Stadium, and another $40 million to $50 million in improvements to the 22-year-old facility have been folded into Hamilton County’s negotiations of a new contract with the NFL’s Bengals.

Private business leaders in the region also have said they are working to raise an additional $35 million to $50 million to enhance the experience for spectators.

Ohio created a special fund for luring this type of sporting event in 2019, and the most recent state budget calls for two infusions of up to $5 million into it over the next two years.

The Major Events Reimbursement Program allows hosting cities and local organizers to apply for money to cover costs related to the event, including any rights fees they have to pay. For the World Cup, organizers in Dallas and Houston could apply to the program to draw millions in tax money that would help cover any rights fees demanded by FIFA.

Other states are leaning on private funding.

In an April letter to FIFA officials, Pennsylvania Democratic Gov. Tom Wolf said Philadelphia Soccer 2026 has so far raised $50 million in private funding to cover the city’s hosting responsibilities, an amount he said the state would supplement.

The Denver Sports Commission’s executive director, Matthew Payne, said the city estimates it would cost $40 million to $45 million in private funds to host Cup games and that “we are about at the halfway point in that budget.”

Payne insisted no taxpayer dollars were involved in the bid — though taxpayer-funded city projects, such as renovations to Denver International Airport and ongoing road and light rail construction, did feature as selling points.

Private fundraising is heavy on corporate involvement; he declined to reveal prospective donors ahead of Thursday’s announcement.

“We feel really, really strongly that we’ll generate the dollars needed privately to provide for all elements of staging World Cup games,” Payne said. “It is doable.”

Colorado’s Legislature has appropriated no funds or acted on any legislation regarding the 2026 Cup.

The remaining U.S. areas and stadiums: