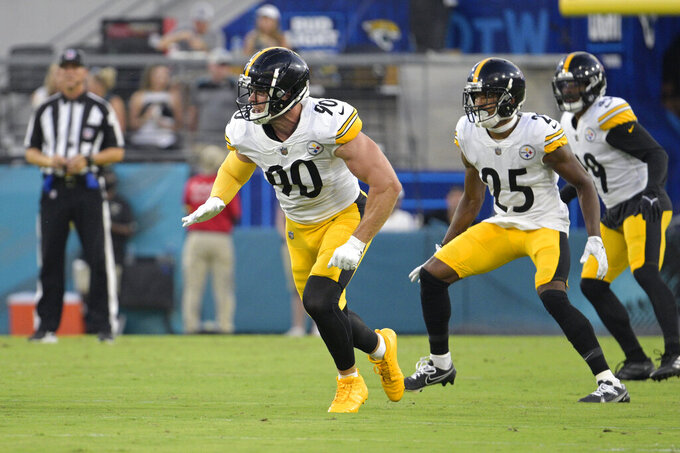 FILE - Pittsburgh Steelers linebacker T.J. Watt (90) follows a play during the first half of a preseason NFL football game against the Jacksonville Jaguars, Saturday, Aug. 20, 2022, in Jacksonville, Fla. Watt tied an NFL record with 22½ sacks last season on his way to capturing the Defensive Player of the Year award. (AP Photo/Phelan M. Ebenhack, File)

Strengths: The Steelers are one of the few teams in the league that can boast difference-makers at all three levels of the defense. Defensive end Cam Heyward is a perennial Pro Bowler and — entering his 12th season — may be mounting a fringe Hall of Fame candidacy. OLB T.J. Watt is maybe the best edge rusher in the NFL and is coming off a season in which he won the league’s Defensive Player of the Year award after tying a league record with 22 1/2 sacks. Pittsburgh made S Minkah Fitzpatrick a very rich man in the offseason and he seems intent on making sure he proves he’s worth every penny.

Weaknesses: For the first time in nearly 20 years, the Steelers enter the season with uncertainty at quarterback. Ben Roethlisberger is off into retirement and it seems as if Mitch Trubisky will be given the first chance at replacing a franchise icon. How Trubisky fares will play a major factor into when — not if — first-round pick Kenny Pickett gets a chance to show his breakout season last fall for the University of Pittsburgh is not a fluke. And for all the star power on defense, there are serious depth concerns along the defensive line and at linebacker. The Steelers finished last in the NFL against the run last year. The arrival of Myles Jack and Larry Ogunjobi provides a bit of a talent influx in the front seven, but there’s plenty to be skeptical about.

Camp Development: WR George Pickens, a second-round pick, looked every bit like the big-time playmaker the Steelers are looking for to complement WR Diontae Johnson. The 6-foot-3 Pickens has made difficult catches in traffic while also stretching the field at times. His rapid emergence will put a bit of pressure on WR Chase Claypool to recapture the magic of the first half of his rookie season in 2020.

Fantasy Player To Watch: RB Najee Harris. The Steelers relied heavily on Harris last season, and he responded by setting a franchise rookie record for yards rushing in a season (1,200). Harris is versatile (74 receptions) and durable. While coach Mike Tomlin and offensive coordinator Matt Canada say they’re trying to find ways to ease Harris’ load a little, the gap between Harris and the backups is so large they might not have a choice but to ride him as far as he can go.

Expectations: The Steelers enter the post-Roethlisberger era as somewhat of an unknown. Can Trubisky play well after flaming out in Chicago and spending last season as Josh Allen’s backup in Buffalo? Was Pickett’s insurgent Heisman Trophy candidacy at Pitt last fall a mirage? Can the retooled offensive line be effective enough to let whoever the quarterback is do his job effectively? Can the defense not get run over against quality competition? Tomlin has never had a losing season in 15 years on the sideline. He’s embracing the challenge of trying to prove his success wasn’t entirely dependent on Roethlisberger. The defense will need to be good early while the offense finds its footing. Don’t expect a massive plunge into the depths of the AFC, but a lot of things will have to go right — particularly at quarterback — for them to return to the playoffs for a third straight year.