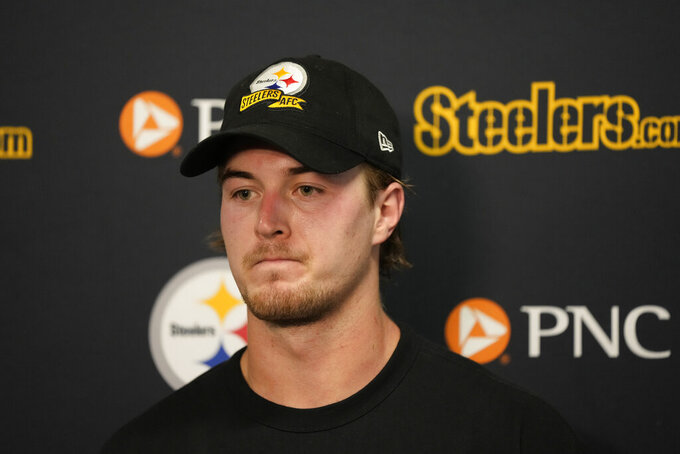 PITTSBURGH (AP) — Mike Tomlin had an out if he was looking for one a week ago. Kenny Pickett was in the concussion protocol. Mitch Trubisky had come off the bench and played well in an upset win against Tampa Bay.

Only Tomlin didn't hesitate, saying even before Pickett was fully cleared that the Pittsburgh Steelers were going right back to their rookie quarterback the second he was available.

“We’re not going to blow in the wind,” Tomlin said.

It's a long-term commitment that Tomlin understands may result in some short-term growing pains, some of which were on display during Sunday night's 16-10 loss to Miami.

Pickett tossed three more interceptions — including two in the final minutes — to bring his total to seven in essentially three full games. Only Matt Ryan and Matthew Stafford have thrown more, and both veterans have thrown at least 98 more passes than the 20th overall selection in last April's draft.

The last turnover served as a microcosm of the roller-coaster start to Pickett's career. He escaped pressure — one of the reasons the Steelers were so high on him — and appeared to have room to run for 10 yards. Pickett, however, also spotted Diontae Johnson running down the left sideline near the end zone. He pointed to Johnson, a finger wag Johnson took to mean Pickett wanted him to go deep.

Pickett instead had asked Johnson to cut the route off near the goal line and threw short hoping Johnson would come back to the ball. He didn't and the pass ended up in the hands of Miami defensive back Noah Igbinoghene as the Steelers fell to 2-5 for the first time since 2013.

“That’s on me," Pickett said. “I’ve either got to throw it away to give us another chance or make a better throw over the top to him, so it’s definitely on me.”

Tomlin is making it a point to do what he can to protect Pickett, stressing over and over again his team's faults are hardly limited to a 24-year-old just a handful of games into his NFL career.

“I thought he was highly competitive, played to win,” Tomlin said. “He made some plays. Unfortunately he and we didn’t make enough.”

It's a theme that has popped up almost weekly for the NFL's second-lowest scoring team. Offensive coordinator Matt Canada has struggled to develop an attack that regularly threatens to reach the end zone in his year-plus on the job, regardless of who is throwing the ball, who is running it or who is catching it.

Canada's ineffective game-planning — and not Pickett's sometimes iffy decision-making — could be Pittsburgh's biggest hurdle to real progress this season. Canada's future in Pittsburgh is shaky at best. Not so for Pickett, who has the full faith of a team that is maybe a loss or two away from turning all of its attention to 2023 and beyond.

For the first time in a long time in Pittsburgh, it's the “when” that's the question.

The in-game adjustments by the defensive coaching staff. Miami raced up and down the field three times in the first quarter and it looked as if a blowout akin to the one Pittsburgh suffered at Buffalo two weeks ago was at hand.

Instead, the Steelers tightened up and gave the offense a chance to get back in it.

After making Tom Brady uncomfortable in critical situations a week before, the pass rush did little to rattle Tagovailoa in his first start after being cleared of the league's concussion protocol. The Steelers failed to record a sack and hit Tagovailoa just once.

The silver lining is star outside linebacker T.J. Watt is nearing a return from a left pectoral injury. Yet it's growing increasingly likely that it won’t be soon enough for Pittsburgh to play meaningful games in late December and beyond.

Tomlin has been steady in his support of inside linebacker Devin Bush, who is in a contract year after the Steelers declined the 2019 first-round pick's option for next season. It's not just bluster. Bush has been increasingly noticeable in recent weeks and added a tackle for loss and swatted down a pass on Sunday night.

The jugs machine the secondary uses at the end of practice. Pittsburgh dropped four potential interceptions of varying degrees of difficulty that could have swung momentum. Miami didn't waste two of the reprieves, kicking a pair of field goals shortly after the Steelers let possible turnovers smack off their hands.

Cornerback Levi Wallace's bumpy first season in Pittsburgh continued when he left with a shoulder injury. Otherwise, the Steelers escaped relatively unscathed, a rarity of late.

7 — the number of interceptions Pickett has thrown in essentially three games of play. Ben Roethlisberger, by comparison, had 11 picks in 13 games as a rookie in 2004.

Head across the state next Sunday and attempt to do something the franchise hasn't done since 1965: Win in Philadelphia. The nine-game losing streak in the City of Brotherly Love includes a 34-3 rout in 2017.