Steelers get late FG in OT after Watt injured vs Bengals 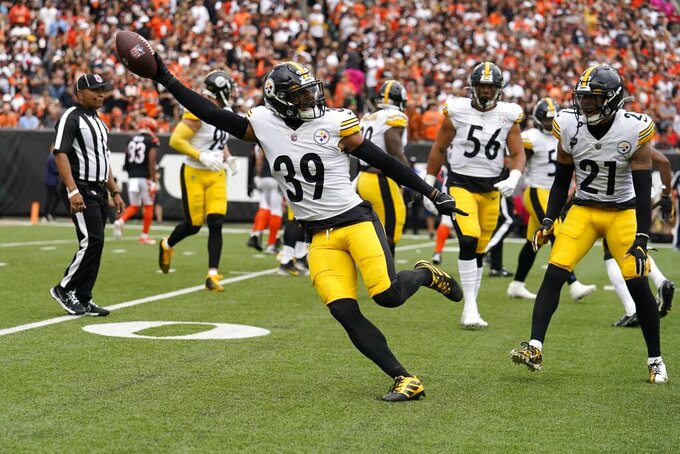 Pittsburgh Steelers safety Minkah Fitzpatrick (39) celebrates after returning an interception for a touchdown during the first half of an NFL football game against the Cincinnati Bengals, Sunday, Sept. 11, 2022, in Cincinnati. (AP Photo/Jeff Dean)

CINCINNATI (AP) — Minkah Fitzpatrick and the Pittsburgh Steelers kept kicking the door open against the Cincinnati Bengals. It took until the final whistle to finally walk on through.

Chris Boswell kicked a 53-yard field goal as time expired in overtime and the Steelers overcame T.J. Watt’s injury late in the fourth quarter to beat the Cincinnati Bengals 23-20 in a sloppy season opener for both teams Sunday.

Watt and Fitzpatrick had two of four interceptions off Joe Burrow, who rebounded from a lousy start and rallied Cincinnati from a 17-6 halftime deficit. His 6-yard touchdown pass to Ja’Marr Chase tied it at 20 with 2 seconds left in regulation

“It's just good to come in here in a hostile environment, man, and not blink, particularly with a number of new guys, whether they're rookies or new to us," Pittsburgh coach Mike Tomlin said.

“That was pretty crazy — the back-and-forth nature,” Trubisky said. “We found out a lot about this team. We battled, we stuck together. We have a lot to clean up, but we found a way in the end. Winning is fun.”

Watt, the Defensive Player of the Year, left the field and headed to the locker room shortly before the game went to overtime with a pectoral injury. Before that, he was his usual disruptive self, with a sack and a pick.

Burrow's four interceptions were a career worst, and he was sacked seven times in front of what was supposed to be an improved offensive line.

“It’s frustrating," Burrow said. "We came back in the second half. We finished strong. Give them credit. They had a good plan.”

Burrow didn't play in the preseason games as he recovered from an appendectomy, and he got a rude welcome back to the field. Cam Heyward sacked him on Cincinnati's first offensive play, and Fitzpatrick jumped Tyler Boyd's route the next snap and returned it 31 yards for a Pick-6.

McPherson made a 59-yard field goal in the first quarter, but Watt made a leaping interception at the line on the next series. That set up Trubisky's 2-yard TD pass to Najee Harris for a 17-3 edge.

Trubisky, the first quarterback to start for the Steelers after Ben Roethlisberger's retirement, was 21 for 38 for 194 yards and the short TD pass to Harris as first-round pick Kenny Pickett watched from the sideline.

The Bengals wasted a solid performance by the their defense, which limited the big plays and did a good job containing running back Harris, who finished with 23 yards on 10 carries before leaving late with a foot injury.

Chase had 10 catches for 129 yards for the Bengals.

For much of the day, Burrow looked as if he was struggling to get back on track. He finished 33 for 53 for 338 yards and two touchdowns.

Asked if he was still trying to shake off the effects of his July surgery, he would only say, “I felt good.”

Bengals: WR Tee Higgins left with a concussion from a hard hit by several Steelers. ... LS Clark Harris went out with a biceps injury.

Steelers: At New England next Sunday.

Bengals: At Dallas next Sunday.