Steelers head to KC for game with AFC playoff implications 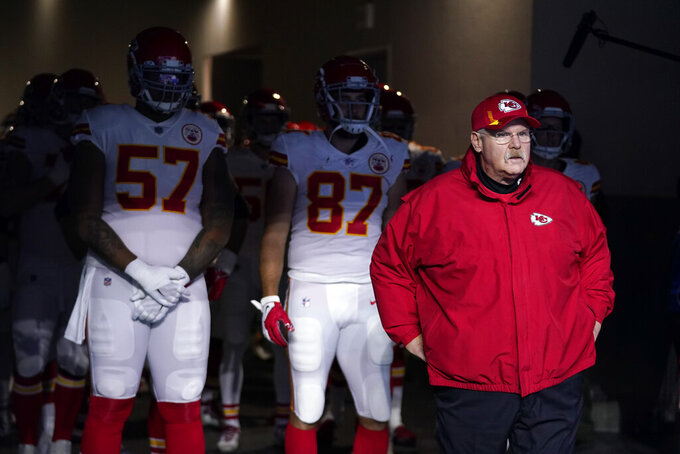 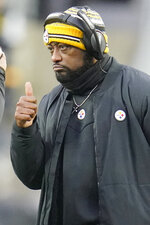 He talked about about how wide receiver Tyreek Hill can create “unbelievable issues."

He waxed poetic about defensive tackle Chris Jones and his rare “ability to disrupt an overall offensive game."

Well, there's a chance Tomlin won't see any of them Sunday.

The three perennial Pro Bowl picks were part of a COVID-19 outbreak in Kansas City that snagged 13 players on the active roster and three more on the practice squad. And while there's a chance that all three test out of protocol in time to suit up for a crucial showdown Sunday, there's also a chance that they'll be watching on television.

“We've got a big week ahead of us,” Tomlin insisted. “We've got some big days ahead of us, and we look forward to heading to Kansas City and putting our skills on display against a group that's an AFC titan.”

Indeed, it's a big game for both teams Sunday.

The Steelers (7-6-1) kept their playoff hopes alive with last week's offensively challenged 19-13 win over Tennessee, but their tie earlier this season leaves them staring up at eight-win Cincinnati and Baltimore in a crowded AFC North.

As for the Chiefs (10-4), they've won seven straight games behind a vastly improved defense and an offense that appears to be shrugging off a midseason slump. They're trying to hold off the rest of the conference for the No. 1 seed — and with it the lone playoff bye and homefield advantage — while clinching a sixth consecutive AFC West championship.

“The Steelers are a good team. They do a lot of good things offensively and defensively,” Chiefs coach Andy Reid said. “You saw what they did last week with Tennessee. We have to cover everything and then we have to make sure we do what our guys do best, and get out and play.

Along with Kelce and Hill, the Chiefs could be without right tackle Lucas Niang and backup tight end Blake Bell due to virus protocols. On defense, leading tackler Nick Bolton tested positive with cornerbacks Charvarius Ward and Rashad Fenton.

None of that seems to have the Chiefs worried, though. They dealt with a slew of injuries last season to reach their second consecutive Super Bowl, so they take to heart the next-man-up cliché that coaches push on anyone that will listen.

Besides, there's still a chance that some of those players will be available for Kansas City by kickoff.

“We haven't really changed much,” Chiefs quarterback Patrick Mahomes said. “There's obviously some routes and things that Travis and Tyreek can run that no one in this world can, but we have a game plan that we put together that trusts these guys to make things happen. I'm going to keep trusting them.

"And hopefully we have Travis and Tyreek back, but if not, we'll be ready to go.”

The Steelers put starter Devin Bush and fellow linebacker Marcus Allen on the COVID-19 list along with offensive tackle Zach Banner. Robert Spillane and rookie Buddy Johnson are first in line to get the additional reps at linebacker, while Joe Haeg would be the primary backup offensive tackle.

HEY, I KNOW YOU

The Steelers traded defensive end Melvin Ingram to the Chiefs last month for a sixth-round draft pick after he had fallen out of favor in Pittsburgh. And while the longtime Chargers pass rusher has yet to produce much in Kansas City, his mere arrival allowed the Chiefs to move Jones back to his normal defensive tackle position with positive results.

“Melvin no longer wanted to be here. For us, we prefer volunteers as opposed to hostages," Tomlin said this week. "That formula allows us to come together in ways you can’t measure.”

Steelers pass rusher T.J. Watt leads the league with 17 1/2 sacks this season. The job of slowing him will fall on Chiefs left tackle Orlando Brown Jr., who already has faced Watt during his time with division-rival Baltimore.

“He's an incredible player, man. T.J. is one of the best,” Brown said. “He plays with an effort unknown to man. He's very skilled at what he does, very precise with the way he attacks your hands. He's an amazing player.”

The Chiefs should have playmaking cornerback L'Jarius Sneed back from a two-game absence, which would be especially helpful if Ward and Fenton remain on the reserve list. Sneed hasn't played since his oldest brother, TQ Harrison, was stabbed to death earlier this month in his hometown of Minden, Louisiana.

The Steelers only managed 168 yards total offense against the Titans last week, eking out a win thanks mostly to the four turnovers forced by their defense. But don't expect quarterback Ben Roethlisberger to apologize for anything.

“We’ve had unbelievable offensive games where we’ve lost and really bad offensive days where we won,” he said. “At the end of the day, we’ll take the win. And so that’s what you have to measure success on in my opinion.”