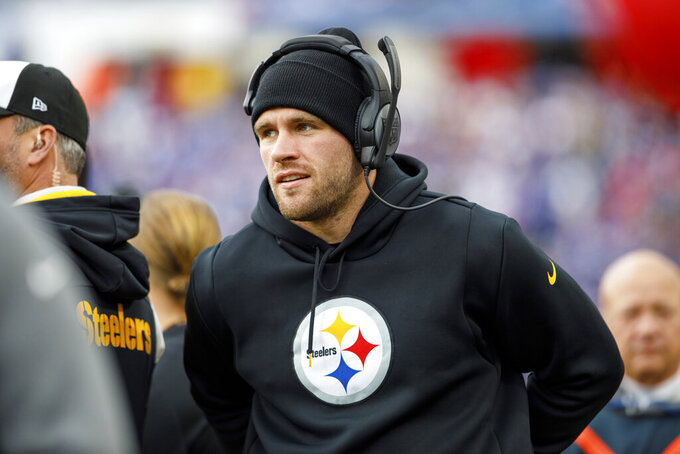 PITTSBURGH (AP) — Mike Tomlin is not ready to bail on 2022, even as the reality that at 2-6 the Pittsburgh Steelers have dug themselves a hole so deep it's difficult to imagine they dig out in time to be anything other than a spoiler down the stretch.

Not that Tomlin wants to dwell on a first half that was Pittsburgh's worst since 2013.

New Orleans isn't much better. The Saints are 3-6 heading into Sunday's visit to Pittsburgh after getting manhandled at home by Baltimore last Monday. Unlike the Steelers, however, New Orleans plays in the underwhelming NFC South and is very much in it in a division that entered mid-November without a team with a winning record.

“We’ve been through some patches, but it’s all good,” Saints tight end Juwan Johnson said. "We’re going to be all right.”

Maybe, but a loss to the offensively challenged Steelers would put a significant cramp in any legitimate shot New Orleans has at making a run over the season's second half.

Pittsburgh's best chance at building momentum likely isn't going to come from the league's second-lowest scoring offense but a defense that should get a boost with the return of star outside linebacker T.J. Watt. The NFL's 2021 Defensive Player of the Year is expected to come back from a torn left pectoral sustained late in a season-opening win over Cincinnati.

The Steelers won just once during Watt's seven-game absence, in part because the pass rush evaporated with Watt watching from the sideline in sweatpants. A little of Watt's unique brand of havoc could go a long way to giving Pittsburgh the spark it so desperately needs. And the Saints — who let Andy Dalton absorb four sacks against the Ravens — know it.

“He just has a way of knowing where the ball is and he finds the ball and generally when he gets around the ball he’s affecting it in some way — sack-fumble, top-down punch-out, something of that nature,” New Orleans coach Dennis Allen said. "He’s a turnover machine.”

The Steelers created five takeaways in Week 1 with Watt in the lineup and just five without him.

If Pittsburgh wants to mount a surge back to respectability — something the Tomlin-coached 2013 team did while managing to get to 8-8 after that horrendous start — it needs to start soon, likely with Watt serving as the tip of the spear.

“We understand this as a put-up or shut-up game, and particularly at this level, we tend to talk less and let our play speak for us,” Tomlin said.

The Saints haven’t merely been frustrated by their offense’s problems with losing turnovers. There’s also the matter of the defense struggling to take balls away from opposing offenses.

New Orleans has an NFL-worst turnover differential of minus-10, having lost the ball 17 times and taken it away just seven times on two interceptions and five fumble recoveries.

“That’s something that we’ve got to figure out — how we can take the ball away a little bit more often?” Allen said. “I don’t know that it’s for a lack of effort, lack of trying. We just haven’t been able to get it done. So, certainly something we’re going to keep working on.”

Pittsburgh rookie quarterback Kenny Pickett implored his teammates to study together more during the bye week in hopes of helping a unit that ranks near the bottom of the NFL in nearly every major statistical category take some of the pressure off a defense that has wilted at critical times.

Pickett has been practicing what he preaches, frequently working off to the side with the skill position players in hopes of speeding a learning curve that has proved daunting at times.

“Being able to get free time when the defense is out there working off to the side on whatever extra routes we need, timing purposes, those guys are great,” Pickett said. “They give full effort, and I can get timing. It’s been going pretty well so far.”

Saints linebacker Demario Davis is taking pride in the efficiency of his blitzes this season. While Davis says he’s being sent after opposing quarterbacks a little less this season, he already has matched his career high of six sacks with eight games left.

“I do see me positioning and evolving into more of a pressure player,” said Davis, who is 33 and in his 11th season. “I just think the greatest strength of my game is in pressuring the quarterback.”

Allen said the Saints can’t blitz Davis too often because they need him in coverage at times, but added, "I do think he’s one of the better blitzing linebackers in our league.”