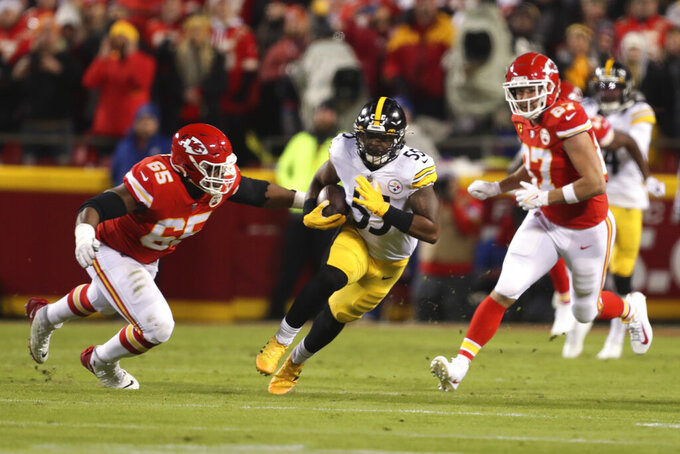 FILE - Pittsburgh Steelers inside linebacker Devin Bush (55) runs from Kansas City Chiefs guard Trey Smith (65) and tight end Travis Kelce (87) after intercepting a pass during the first half of an NFL wild-card playoff football game, Sunday, Jan. 16, 2022, in Kansas City, Mo. Bush will be playing for his job in 2022. The Pittsburgh Steelers have declined the fifth-year option on the inside linebacker, meaning he can become a free agent next spring. (AP Photo/Travis Heying, File)

PITTSBURGH (AP) — Devin Bush needed to get away.

So the Pittsburgh Steelers linebacker retreated to Florida over the winter, where he found solitude and solace in the simple act of throwing on a pair of shoes and jogging for miles on the beach.

The long runs proved cathartic. Both for Bush and his surgically rebuilt left knee. The tentativeness that lingered for long stretches in 2021 as Bush tried to rebuild trust in a joint that betrayed him in October 2020 slowly eased. The memory of that one bad step against Cleveland that tore his ACL slowly faded with each confident step.

“I was cutting, planting, jumping, playing around and my knee wasn't an issue,” Bush said on Wednesday. “I was able to get back to (doing) that and just normal things to get my confidence back in myself and my knee.”

Bush will need plenty of belief in both this fall if he wants to assure himself of a long-term future in the NFL, be it in Pittsburgh or elsewhere. The Steelers declined the fifth-year option on the contract Bush signed after Pittsburgh traded up to select him with the 10th overall pick in the 2019 draft.

It's a business decision Bush said he didn't take personally, but he downplayed the idea he is out to quiet the doubters — be they in the Steelers front office or elsewhere — as he enters his fourth season.

And play it the way he did for the first 21 games of his career. Bush finished third in the Defensive Rookie of the Year voting in 2019 and was off to a solid start in 2020 before his second season came to an abrupt halt in a blowout victory over the Browns.

Bush attacked his rehab so aggressively he was ready to go by the 2021 opener, making 10 tackles and forcing a fumble in a Week 1 upset in Buffalo. He tweaked his groin, however, during practice the following week and saw his playing time fluctuate as the season wore on.

He admitted last December there was a stretch in midseason where he was " was going through some more mental issues of being out there and knowing I had to make plays.”

The kind of impactful plays that Bush made regularly pre-injury were harder to find in 2021, his struggles mirroring that of a defense that finished last in the NFL against the run.

Bush called Jack a playmaker who can also play every down, a trait Bush insists he still has despite sharing snaps with less-heralded teammates such as Rob Spillane and Buddy Johnson as 2021 wore on. As he talks, it sounds as if he's hit an internal reset button, eager to showcase the speed and decisiveness that made him a fixture on the field regardless of the situation before getting injured.

In a way, he is. Bush is playing for a job next year after the Steelers declined to pick up his option. Safety Terrell Edmunds, the team's first-round pick in 2018, was in the same position year ago. Edmunds responded with a solid if not spectacular season last fall and re-signed with Pittsburgh on a one-year deal.

Bush stressed he's not angry with the team's decision, saying it's one the Steelers felt they needed to make. The NFL is a business after all. Pittsburgh drafted Bush to provide a service.

He didn't do it to his capabilities last season. The next seven months provide an opportunity for Bush to regain his swagger. That's his focus, nothing more.

“I was already motivated regardless of whether they picked up the fifth year," he said. “I'm just motivated to play football and win.”