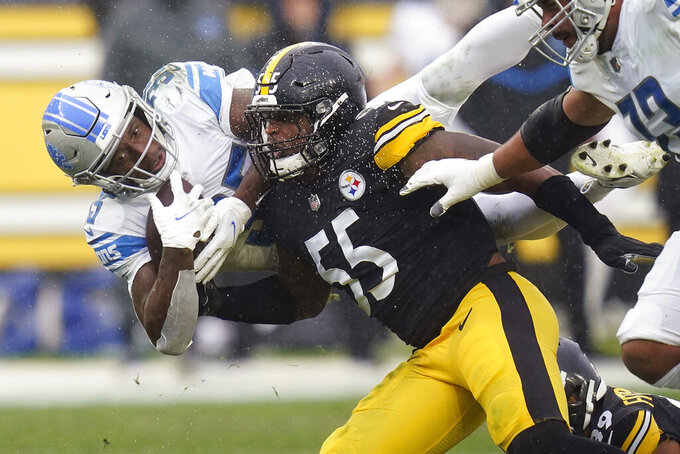 PITTSBURGH (AP) — Devin Bush isn't about to point the finger. Not at any of his Pittsburgh Steelers teammates. And certainly not at himself.

The way the third-year linebacker figures it, he's hardly the only one struggling during Pittsburgh's month-long funk that's dropped them to last in the chaotic AFC North.

“Obviously nobody on the Steelers is playing up to their potential,” Bush said Monday. "Nobody is playing their best football right now. I’m not going to single myself out or anybody else out.”

Bush actually had one of his better games of the season in a 36-28 loss to Minnesota last Thursday that dropped Pittsburgh to 6-6-1 with a month to go. He finished with eight tackles and two passes defensed, though he also found himself on the sideline late in the game in favor of rookie Buddy Johnson, who made his NFL debut late in a game in mid-December with the Steelers trying to put together an improbable comeback from a 29-point deficit.

While coach Mike Tomlin's decision to throw Johnson onto the mix could look like him trying to send a message to Bush and fellow inside linebacker Joe Schobert, Bush didn't see it that way.

Maybe, but the immediate future for the Steelers is cloudy at best. Each of their final four games are against teams in playoff contention, starting with a visit by AFC South-leading Tennessee (9-4) on Sunday.

If Pittsburgh is going to have any shot, it needs a defense that's struggled to stop the run and could be missing star outside linebacker T.J. Watt — who is dealing with a groin injury — to find some semblance of traction. For that to happen, Bush needs to make a consistent impact, something he has struggled with since his return from a torn ACL in his left knee that cut short his 2020 season.

Bush was ready in time for the start of the regular season, but he has lacked the explosiveness that served as one of the reasons Pittsburgh traded up to take him with the 10th overall pick in the 2019 draft. He has just two tackles for loss — both of them sacks — and has been overpowered at times in the run game.

Still Bush believes he's made “tremendous strides" in 2021 despite the mixed results.

Maybe, maybe not. Bush admits while his body may be healed, his mental recovery remains a work in progress.

“Early in the season, it was definitely a learning process for me just getting my mind back in football mode,” Bush said. “Toward the middle of the season, I was going through some more mental issues of being out there and knowing I had to make plays.”

The Steelers need him to if they want to have any chance at reaching the playoffs for a second straight year. Bush's status is a starter is hardly in jeopardy, not with Pittsburgh so thin at his position. Yet there are bigger questions at play, including whether he's done enough for the team to exercise its fifth-year option for him during the offseason.

It's something Bush isn't thinking about. At least at the moment.