Steelers looking for better O-line play, regardless of QB 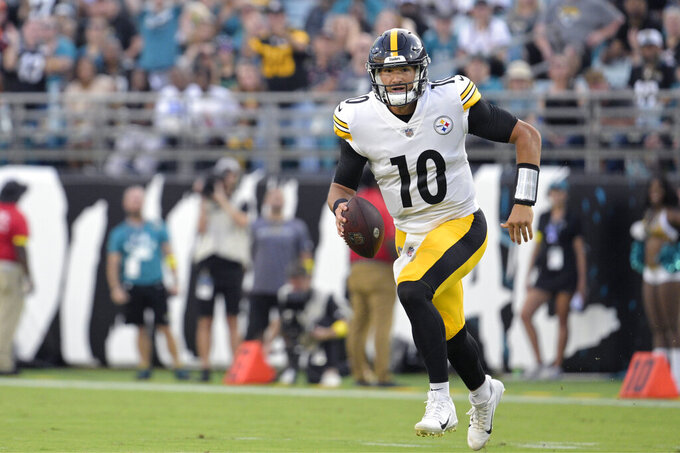 PITTSBURGH (AP) — Mike Tomlin has spent the past month fending off almost daily questions about the Pittsburgh Steelers' quarterback competition.

Mitch Trubisky. Kenny Pickett. Mason Rudolph. For weeks every snap, throw and decision — both good and bad — by the three men vying to replace the retired Ben Roethlisberger has been scrutinized to within an inch of its life, both inside and outside the team's headquarters.

The most pressing question around the franchise will be answered at some point in the next week, with Sunday's preseason finale against Detroit providing all three a chance to state their case for the final time.

If anything, the way all three have responded to the challenge appears to have quelled the combination of excitement and anxiety Tomlin — perhaps facetiously — copped to having when camp opened.

“I was optimistic (when we started) and I think they've met my expectations,” Tomlin said Friday.

The offensive line set to play in front of whoever emerges as the starter for the season opener in Cincinnati on Sept. 11, not so much. The first unit struggled during last week's victory over Jacksonville, forcing Trubisky and Pickett to rely on their legs as much as their right arms in an attempt to move the ball.

The shaky performance led to an uncomfortable video session in the aftermath, with Tomlin offering a typically blunt assessment. Yet right guard James Daniels described less of a tongue lashing and something more akin to a prosecutor making a pretty compelling case.

“What he was saying really wasn't bad, it was just factual,” said Daniels, who signed a three-year deal to join Pittsburgh in March. “We had plays and he's like ‘This is the standard' and then he shows the clips (from Jacksonville) and he's like, ‘This isn’t the standard.'"

Not the kind the Steelers need the line to meet if they want to have a chance to reach the playoffs for a third consecutive year. Pittsburgh hired Pat Meyer as offensive line coach in February, signed Daniels and center Mason Cole in free agency and cut popular but often injured right tackle Zach Banner, all with the idea of giving whoever emerges from the quarterback derby a chance at success.

While it's far too early to overreact, Tomlin expects to see progress against the Lions, even if that means playing the starters into the second half, something typically unheard of in a preseason finale. Maybe Tomlin felt as if he doesn't have much choice after the Steelers ran for just 24 yards on 14 carries against a team coming off a 3-14 season.

And while the line seems appropriately chastened in the aftermath, Tomlin shrugged when asked if he liked the way the group responded during practice this week.

Having Najee Harris on the field might help. The second-year running back could make his first appearance of 2022 against Detroit. Harris set a franchise rookie record by running for 1,200 yards last year. He spent the first two preseason games watching from the sideline as the Steelers searched for depth behind him.

There still seems to be little clarity in that department, though it hardly matters as long as Harris is healthy. He certainly looks fresh, and the guys who will block for him are eager to see Harris' No. 22 racing by on his way through the holes they are paid handsomely to create.

“It’ll definitely help,” left guard Kevin Dotson said. “Just, you know, we want to be able to give him the best opportunity to make the most of everything.”

If not, another uncomfortable video session awaits.