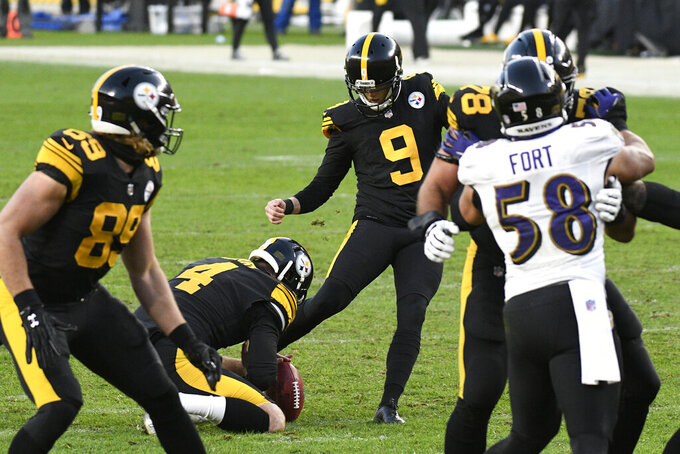 Pittsburgh Steelers kicker Chris Boswell (9) hits a field goal from the hold of Jordan Berry (4) during the first half of an NFL football game against the Baltimore Ravens, Wednesday, Dec. 2, 2020, in Pittsburgh. (AP Photo/Don Wright)

PITTSBURGH (AP) — The Pittsburgh Steelers will be without placekicker Chris Boswell when they put their unbeaten 11-0 record on the line against Washington.

Boswell is inactive because of a hip injury that forced him to miss practice during the week. Boswell started the season strong but had struggled of late, missing at least one field goal or extra point in three of Pittsburgh's past four games.

Matthew Wright, signed to the practice squad last week, will make his NFL debut in place of Boswell.

The Steelers will also be without veteran cornerback Steven Nelson, who is out after injuring his knee last week against Baltimore. Cam Sutton, who typically plays as a nickel back, will start in place of Nelson. Starting running back James Conner and center Maurkice Pouncey will both miss their second straight games because of COVID-19 protocols.

Washington will have leading receiver Terry McLaurin and offensive tackle Morgan Moses, both of whom were listed as questionable because of injuries.