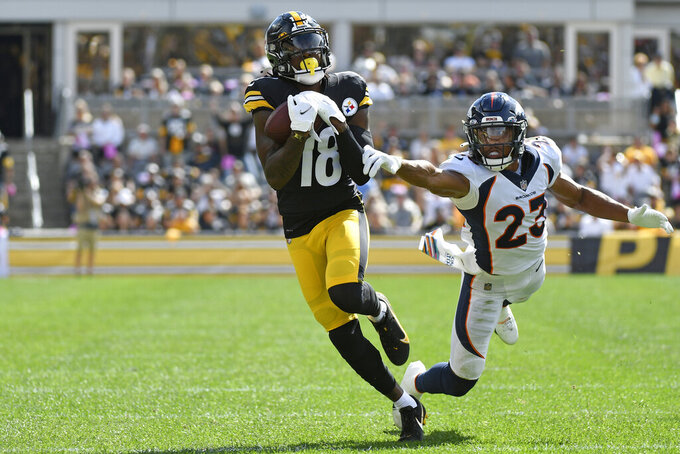 Pittsburgh Steelers wide receiver Diontae Johnson (18) hauls in a pass from quarterback Ben Roethlisberger with Denver Broncos cornerback Kyle Fuller (23) defending during the first half of an NFL football game against the Denver Broncos in Pittsburgh, Sunday, Oct. 10, 2021. Johnson took the ball in for a touchdown. (AP Photo/Don Wright)

PITTSBURGH (AP) — A wide receiver will line up in the slot for the Pittsburgh Steelers on Sunday night against Seattle. They will find a pass headed their way on third down. They will go over the middle looking to deliver as much punishment as they receive.

None of them, however, will do it with the same easy swagger as JuJu Smith-Schuster.

The five-year veteran and social media star's season is over after injuring his right shoulder in a win over Denver last Sunday.

And no offense to Diontae Johnson or James Washington or Chase Claypool or anyone else tasked with taking over Smith-Schuster's myriad job responsibilities, quarterback Ben Roethlisberger acknowledges something will be missing without Smith-Schuster's familiar No. 19 in the huddle.

Few receivers in the league possess Smith-Schuster's unique skillset. The 24-year-old is an enthusiastic run blocker — he famously won over teammates as rookie four years ago by crushing former Cincinnati linebacker Vontaze Burfict — and a selfless receiver.

His yards per reception has dipped from 15.8 in 2017 while running alongside Antonio Brown to just 8.6 since the start of 2020, the result of him willingly running underneath while the 6-foot-5 Claypool and dynamic Johnson raced downfield.

“I’m hurt because I miss that guy,” Roethlisberger said. “I mean, what he brings to this team is energy, is excitement. The leadership. It sucks. It really does. And I’m not even the one hurt.”

Smith-Schuster went out on a play that has become symbolic of his role. He took an end-around from Roethlisberger in the second quarter against Denver, headed toward the sideline, then turned upfield. Broncos safety Kareem Jackson was waiting for him just past the line of scrimmage, so Smith-Schuster dipped his shoulder and tried to run him over. For one of the very times in his 63-game career, Smith-Schuster wound up on the wrong end of the exchange.

Now the Steelers (2-3) find themselves trying to build momentum without the player whose infectious energy galvanized a wide receiver group that is still impossibly young. Anthony Miller, signed off waivers from Houston on Tuesday, is the oldest of the bunch and he turned 27 last Saturday. No one has played more than four seasons in the league and all of them were in elementary school when Roethlisberger made his NFL debut in 2004.

Johnson, who has caught touchdowns in three of four games this season, stressed he's confident Pittsburgh can find a way forward.

"Everybody (in the wide receivers room) is capable of playing and contributing to the offense,” said Johnson. “So we are not worried about that. We are still going to go out there and play for JuJu.”

The job will likely extend beyond the receivers. Roethlisberger admitted Wednesday he needs to do a better job of trying to connect with rookie tight end Pat Freiermuth, who has caught 11 of the 13 passes Roethlisberger has thrown his way through five weeks.

“I trust him,” Roethlisberger said. “He's in the right spot.”

There's a chance Smith-Schuster's absence could also create more opportunities for tight end Eric Ebron, who has become an afterthought. Signed as a free agency splurge in March 2020, Ebron has just five receptions for 37 yards a season after hauling in 56 passes and scoring five times.

Asked about Ebron's drop in production, Roethlisberger instead pivoted to make a larger point about the NFL's 27th-ranked offense.

“I don’t think anybody in the skill side of the offense is having the season that we’ve hoped for yet,” he said. “And it really comes down to winning football games because that’s what we all should want to do. Nobody’s really had a huge game. And so I think everyone’s just doing a good job of being patient, understanding that once the offense starts to click a little bit hopefully everyone will be able to start to reap the rewards.”

NOTES: Roethlisberger did not practice Wednesday while he continues to wrangle with hip and left pectoral injuries. ... Washington (groin) and Claypool (hamstring) were limited. ... DB Cam Sutton (groin), who missed the Denver game, was a full participant. ... LB Devin Bush, who left in the third quarter on Sunday with a groin injury, was also a full participant.