Steelers ponder changing of the guard at QB with 20th pick 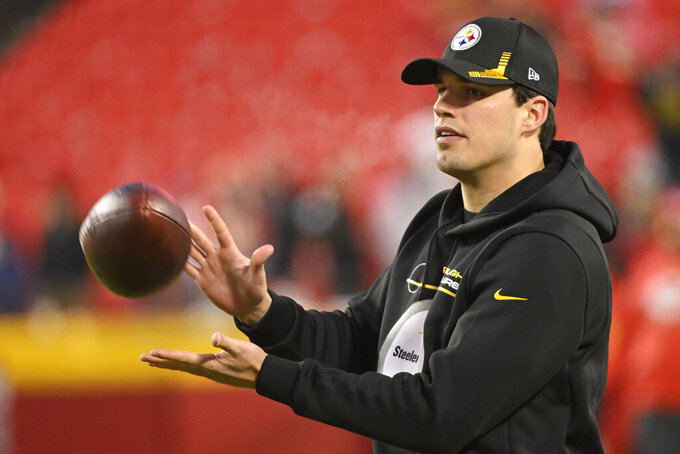 PITTSBURGH (AP) — Pittsburgh Steelers general manager Kevin Colbert has spent more than 20 years being as vague as possible before the NFL draft.

He's never met a question he didn't like to redirect or missed an opportunity to speak in broad generalities when asked about specifics.

His final time through the league's April showcase is no different.

For the first time in nearly two decades, the Steelers head to the draft in need of a quarterback following Ben Roethlisberger's retirement and the death of Dwyane Haskins earlier this month. There will likely be a handful of prospects available when Pittsburgh goes on the clock with the 20th overall pick in the first round. Just don't expect Colbert have commissioner Roger Goodell sprint to the podium with a selection.

To the end, Colbert remains as deliberate — and as noncommittal — as ever.

“Quarterback is obviously a huge position in any given season, especially this year with our Hall of Fame quarterback calling it a career,” Colbert said in March. “So, is it different this year? Yes. But is it going to change how we approach things? No.”

Maybe, but coach Mike Tomlin hasn't shied away from his interest in trying to find a quarterback who can make plays with his legs as well as his arm, a dimension that Roethlisberger lacked during his final seasons. Tomlin dined with Liberty's Malik Willis ahead of Willis' pro day in March.

Willis is among the most intriguing prospects in a quarterback class that lacks depth but — at least in Colbert's eyes — not difference-makers.

“It might not be the number of players at that position that there have been in the past but it’s certainly good quality,” he said. "And there’s going to be starting NFL quarterbacks coming out of this class for sure."

The Steelers haven't taken a quarterback in the first round since taking Roethlisberger 11th overall in 2004, a decision the franchise made at the behest of former owner and Hall of Famer Dan Rooney. Rooney pushed for Roethlisberger because he didn't want to repeat the mistake the team made in 1983 when it opted not to take Dan Marino.

There's no guarantee there's a Marino in the group that includes Pitt's Kenny Pickett and Cincinnati's Desmond Ritter and Mississippi's Matt Corral. The Steelers spent five years getting an up-close look at Pickett, who trained next door at the facility the Panthers share with one of the NFL's marquee franchises. Nearly every member of the offensive coaching staff and the front office attended Pickett's Pro Day, but there's no guarantee he'll be available at 20.

The same goes for Willis. Maybe even Corral. With so many moving parts at quarterback across the league during the offseason, the list of teams searching for their next franchise player is far longer than the number of top prospects available.

No wonder Colbert remains reserved to the very end. The only thing he'll ever cop to is taking the best player available with Pittsburgh's first pick.

For the first time in a long time, it might be a quarterback.

Quarterback is hardly the only position where the Steelers need an influx of talent. The departures of JuJu Smith-Schuster and James Washington in free agency left only Diontae Johnson, Chase Claypool and Ray-Ray McCloud as any receivers with experience in offensive coordinator Matt Canada's scheme. Pittsburgh did sign return specialist Gunner Olszewski and claimed Miles Boykin off waivers from Baltimore, but the need for a receiver who can fit immediately into the top three is a priority.

The season-long absence of Stephon Tuitt and an ankle injury to Tyson Alualu in Week 2 decimated Pittsburgh's depth along the defensive line, a major factor in the Steelers finishing last in the league against the run.

Alualu is expected to return, but he will turn 35 in May. Tuitt's future remains cloudy at best. While Pittsburgh did re-sign Montravius Adams — who came over last year from Seattle — the Steelers could use a big body to line up next to All-Pro Cam Heyward. If the team decides to opt for a non-quarterback in the first round, Georgia teammates Jordan Davis and Devonte Wyatt could fill a serious need, though Davis is likely to be gone if the Steelers hold firm at No. 20.