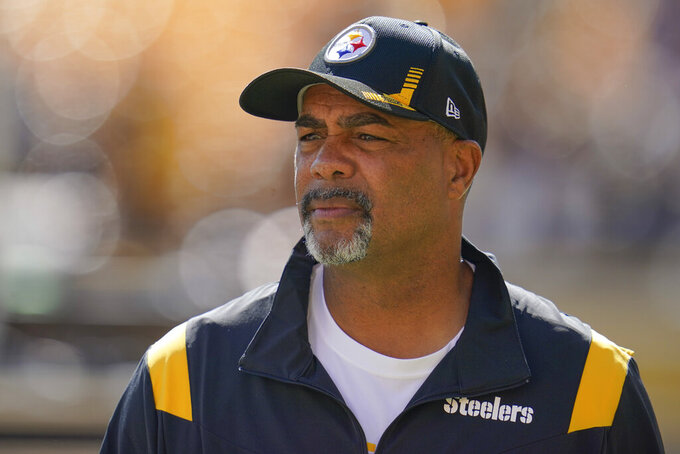 FILE - Pittsburgh Steelers senior defensive assistant coach Teryl Austin watches the team warm up before an NFL football game against the Cincinnati Bengals, Sunday, Sept. 26, 2021, in Pittsburgh. Teryl Austin has been where Brian Flores currently is many times. Eleven to be exact. That's the number of head coaching interviews the Pittsburgh Steelers senior defensive assistant has had through the years, some of which made Austin feel as if he was only there to check a box. (AP Photo/Gene J. Puskar, File)

Austin joined the Steelers in 2019 as a senior defensive assistant coach. This will be Austin's third stint as a defensive coordinator. He previously held the position in Cincinnati in 2018 and in Detroit from 2014-17.

The Sharon, Pennsylvania native — about an hour northwest of Pittsburgh — will take over for Butler, who retired in January after 19 seasons with the Steelers. Austin filled in as defensive coordinator for Pittsburgh in its regular-season finale against Baltimore while Butler was in the league's COVID-19 protocols.

He takes over a defense that will try to rebound from a difficult 2021. The Steelers finished 24th in yards allowed, the organization's worst performance since 1988. Pittsburgh managed to squeak into the playoffs with a 9-7-1 record but was blown out in the first round by Kansas City.

The Steelers do have several pieces in place, including All-Pro outside linebacker T.J. Watt and All-Pro defensive lineman Cam Heyward but also have serious needs along the line next to Heyward and at inside linebacker, where Devin Bush and Joe Schobert were largely ineffective.

There are fewer questions in the secondary, which has excelled since Austin came on board in 2019. The Steelers have allowed just four teams to throw for 300 yards in a game in his three seasons, the fewest in the NFL over that span.

There will be some new faces in the defensive backfield in 2021 with veteran cornerback Joe Haden and safety Terrell Edmunds both entering free agency.

Austin will also work in collaboration with Pittsburgh head coach Mike Tomlin, who has been open about being actively involved in defensive playcalling during games when Butler was the coordinator, an arrangement that is unlikely to change with Austin.

The well-traveled Austin played safety at the University of Pittsburgh and steadily rose up the coaching ranks, landing in the NFL in 2003 with Seattle. He's been a part of three different staffs that have gone to the Super Bowl and earned a ring with Baltimore in 2012.

Austin spent four years on Jim Caldwell's staff in Detroit from 2014-17, helping the Lions post a 36-28 record and reaching the playoffs in 2014. He lasted less than one season in Cincinnati, which fired him in just nine games in following a series of forgettable defensive performances.