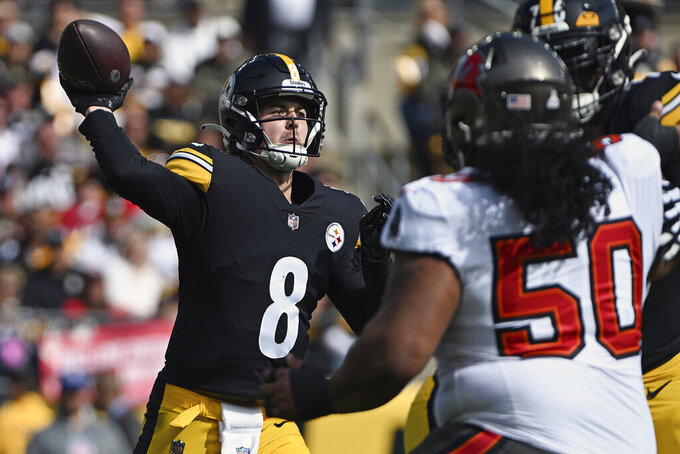 Pittsburgh Steelers quarterback Kenny Pickett (8) throws a pass during the first half of an NFL football game against the Tampa Bay Buccaneers in Pittsburgh, Sunday, Oct. 16, 2022. (AP Photo/Barry Reeger)

PITTSBURGH (AP) — Pittsburgh Steelers rookie quarterback Kenny Pickett will start on Sunday night against Miami after being released from the NFL's concussion protocol on Friday.

Pickett, the 20th overall pick in the draft, left last week's upset win over Tampa Bay in the third quarter after being knocked legally to the ground by Buccaneers linebacker Devin White. Doctors gave Pickett the OK to practice this week without limitations and he will make his third career start when Pittsburgh (2-4) visits the Dolphins (3-3).

“I felt great going through my routine and (practicing),” Pickett said. “If I didn’t, obviously, I wouldn't have been out there.”

Pickett added that he feels “great” but declined to get into specifics about the play in which he was injured or what his first time in the NFL's concussion protocol was like.

“I trusted what the doctors were telling me,” Pickett said. “That’s what they were advising me to do and that’s what they wanted me to do, so, I followed their lead and now I’m good to go this week.”

Backup Mitch Trubisky played well in relief of Pickett, throwing for 144 yards and a touchdown as Pittsburgh ended a four-game losing streak. Steelers head coach Mike Tomlin praised Trubisky's performance but said the team would stick with Pickett if he was available, a vote of confidence in the 24-year-old who is the team's long-term successor to the retired Ben Roethlisberger.

Pickett has looked capable since taking over for Trubisky at halftime of a loss to the New York Jets on Oct. 2, completing 66% (55 of 83) of his passes for 514 yards with a touchdown and four interceptions, three of them in the second half against the Jets.

Pickett is one of three Steelers who will return to action after being released from the concussion protocol. Tight end Pat Freiermuth, who sustained a concussion in a loss to Buffalo on Oct. 9, will play against the Dolphins. So will cornerback Levi Wallace, who also entered the protocol against the Bills.

Pittsburgh will also have most of its starting secondary back to face Miami. Safety Minkah Fitzpatrick (knee) and cornerback Cam Sutton (hamstring) will play after sitting last week. Cornerback Ahkello Witherspoon, who has been out since the season opener with a hamstring injury, is doubtful.

The Steelers will be without wide receiver/returner Steven Sims, who is dealing with a hamstring issue. Sims provided a spark in the return game against the Buccaneers, returning a kickoff 89 yards and a punt 20 yards. Gunner Olszewski, who held the return responsibilities for the first four games before being benched, will fill in.