Pittsburgh Steelers quarterback Kenny Pickett looks to pass against the Seattle Seahawks during the second half of a preseason NFL football game, Saturday, Aug. 13, 2022, in Pittsburgh. (AP Photo/Barry Reeger) 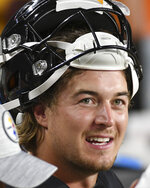 LATROBE, Pa. (AP) — Mike Tomlin wants to see what Kenny Pickett can do against better competition.

After an impressive NFL debut in Pittsburgh's preseason-opening win over Seattle last week that included throwing for the clinching touchdown in the final seconds, the rookie quarterback will see the field far earlier on Saturday when the Steelers visit Jacksonville.

Tomlin said Thursday he plans to have Pickett see action in the first half against the Jaguars, a decision the longtime Steelers head coach made to get a glimpse of how Pickett handles facing more experienced players. Pickett has spent the majority of this week working with the second team, not a promotion so much as a planned experiment.

Pickett is still listed as third on the depth chart behind Mitch Trubisky and Mason Rudolph.

“We simply want to see Kenny in more varsity action,” Tomlin said. “We know more about Mason. Mitch has been around the professional game, obviously. So, this is a big week for (Pickett) in terms of maybe getting in the first half of this game and I would imagine getting the opportunity to see frontline defenders for Jacksonville.”

Pickett, the 20th overall pick in this year's draft, completed 13 of 15 passes for 95 yards. He showed poise in the pocket, made some plays with his legs, and showed a flair for the dramatic by connecting with Tyler Vaughns for a 24-yard touchdown with 3 seconds to go to lift the Steelers to victory.

Tomlin and the rest of the coaching staff have made it a point to bring Pickett along slowly. The team signed Trubisky to a two-year deal in March and has a veteran backup in Rudolph. Pickett has spent the majority of his first few months as a pro working with the third-stringers. He'll get to play with teammates higher on the depth chart in Jacksonville.

Both Tomlin and offensive coordinator Matt Canada have demurred when asked who will be the starter when the Steelers open the regular season in Cincinnati on Sept. 11. All signs point to Trubisky, who has taken the vast majority of snaps with the first string.

The real intrigue may be whether Pickett officially supplants Rudolph by then, a point that might be moot if a team calls inquiring about Rudolph's availability. Tomlin praised the play of all three during the victory over the Seahawks. Each quarterback threw at least one touchdown, with Pickett accounting for two.

“I’ve really been impressed by the group, and we’ll continue to sort through it day by day,” Tomlin said.

Tomlin also downplayed any sense of discord even with Rudolph — by far the most experienced quarterback on the roster in terms of being comfortable in Canada's system — hinting he hasn't received as many snaps with the starters as he would prefer.

“There are no egos,” Tomlin said. “Those guys have done a heck of a job. I don’t have any negative experiences from that perspective. They’ve been encouraging one another, and they’ve been highly competitive. It’s been awesome. Obviously, you want guys that want significant reps.”

While all three quarterbacks will play against Jacksonville, other players will not. Rookie wide receiver Calvin Austin III will not play due to injury, though Tomlin didn't rule out having second-year running back Najee Harris and wide receiver Chase Claypool receive some playing time after being limited by injuries during camp.

“Young guys play,” said Tomlin, who cautioned he wouldn't make a firm decision on Harris or Claypool until closer to kickoff.