Steelers, Raiders hoping to prove Week 1 wins were no fluke 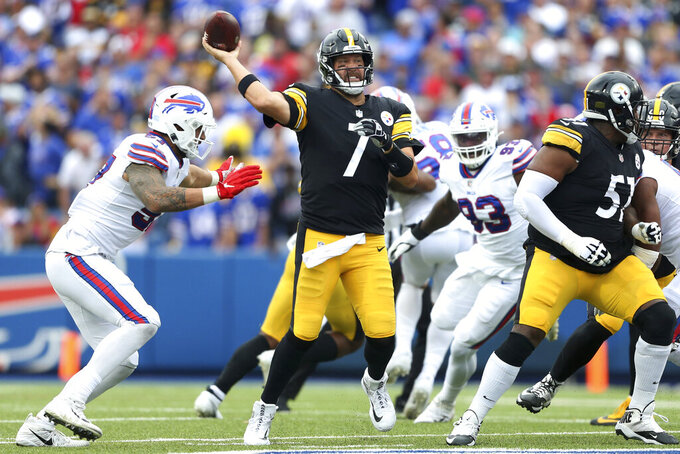 Pittsburgh Steelers quarterback Ben Roethlisberger (7) throws a pass during the second half of an NFL football game against the Buffalo Bills in Orchard Park, N.Y., Sunday, Sept. 12, 2021. (AP Photo/Joshua Bessex)

PITTSBURGH (AP) — Mike Tomlin spent four years on Jon Gruden's staff in Tampa Bay in the early 2000s, helping mold a defense that won a Super Bowl and gleaning what he could from his fiery boss.

Nearing two decades later, the lessons Tomlin — now in his 15th season as the head coach in Pittsburgh — learned from Gruden endure.

“Gruden has no fear," Tomlin said. “He doesn't. He looks at an issue or a problem, and he sees it as an opportunity. I worked for him for four years. You can’t fake that. It’s every day from him.”

And so it is with Gruden's former pupil, who will stand on the opposite sideline from one of his mentors when Tomlin and the Steelers (1-0) host Gruden and the Las Vegas Raiders (1-0) on Sunday.

One of the tenets of Tomlin's coaching philosophy is the idea of not living in fear. His team embodied that philosophy during a season-opening win at Buffalo last week, rallying from 10 points down to stun the defending AFC East champions.

Even the veterans whooped it up after the Steelers sent a message that even with a rookie-laden offense and 39-year-old Ben Roethlisberger throwing on a rebuilt right elbow, they're still relevant in the tough AFC North.

It was thrilling for Pittsburgh. It was also just one game out of 17. The same goes for Las Vegas, which surged past Baltimore on Monday night, suggesting the rebuild Gruden began when he returned to coaching in 2018 after a decade away may finally be taking hold.

It looked that way a season ago, too, before a 2-0 start faded to an 8-8 finish. So Gruden, quarterback Derek Carr and the rest of the Raiders are not getting too far ahead of themselves. Still, Las Vegas is heading east with a chance to send the same kind of message the Steelers sent at Buffalo.

“As a football fan, I’m honored that I get to even step on the field at Heinz Field and get to play against these guys,” Carr said. "It’s cool for me as a fan, but as a competitor, you want to do well and win the game.”

Las Vegas has done that lately against the Steelers. The Raiders are 5-2 against Pittsburgh since Roethlisberger arrived in 2004. All five wins came in seasons in which Las Vegas finished with a losing record and Pittsburgh was .500 or better.

Weird, right? Then again, weird always seems to come with the territory when the Raiders and Steelers meet. This is the rivalry that produced The Immaculate Reception, after all. The painful memory for the Raiders still resonates nearly 50 years later.

“Like I said that ball touched the ground (on the Immaculate Reception),” Carr said.

HARRIS IN A HURRY?

Steelers rookie running back Najee Harris endured a relatively quiet NFL debut, running for 45 yards on 16 carriers behind a new-look offensive line that needed a full half to start finding its footing.

Still, Harris didn't miss any of Pittsburgh's 58 snaps, a sign of how confident Tomlin is in both Harris' conditioning and his potential. The sledding for Harris and the line could be a bit easier against the Raiders, who allowed Baltimore to run for 189 yards in the opener even with the Ravens decimated by injuries to their top three running backs.

The Raiders overhauled their offensive line this offseason and the early results weren’t overly impressive. New center Andre James and rookie right tackle Alex Leatherwood both had issues run blocking and in protection. Las Vegas also lost right guard Denzelle Good to a season-ending knee injury and will be without left guard Richie Incognito (calf) for a second straight week.

“Very proud of those guys, but still, we’re in the process of getting better and playing more games together,” Carr said. “Every game that goes by is more experience together and so hopefully this game against a great defense and a great team like this will be a great challenge for us.”

There will be extra pressure on the pass protection with running back Josh Jacobs out with injures to his toe and ankle.

Carr targeted 6-foot-6 tight end Darren Waller 19 times in the opener, with Waller hauling in 10 passes for 105 yards and a touchdown. He presents a matchup problem for anyone, even a defense that held the high-powered Bills to 16 points in Week 1.

“You can describe him as a tight end, but I think that that seems less than appropriate, to be honest with you," Tomlin said. “That’s putting him in a box.”

The Raiders have a tough task this week, heading on a long trip following an emotional win Monday night. They've lost the last six times they had to travel after a Monday night game. Last season, they got beat 36-20 by New England following a prime-time win at home over New Orleans in their first game ever in Las Vegas. Gruden gave the team a lighter week with just a walkthrough on Wednesday before two days of practice.

“You just try to adapt to the schedule,” he said. “Do the best you can.”