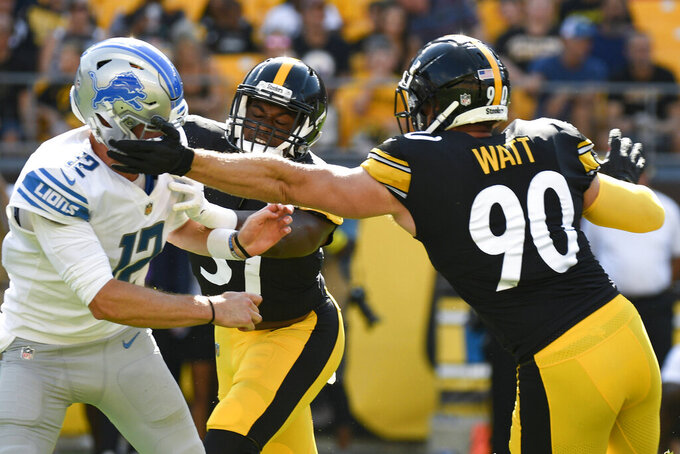 Pittsburgh Steelers linebacker T.J. Watt (90) gets a hand on Detroit Lions quarterback Tim Boyle (12) as he pressures him during the first half of an NFL preseason football game, Sunday, Aug. 28, 2022, in Pittsburgh. No penalty was called. (AP Photo/Don Wright)

PITTSBURGH (AP) — T.J. Watt isn't a fan of cut blocks, however the Pittsburgh Steelers star linebacker isn't ready to weigh in on whether they should be legal or not, even after a scare in last Sunday's preseason finale against Detroit.

The NFL's reigning Defensive Player of the Year narrowly avoided serious injury to his left knee when Lions tight end TJ Hockenson went low — legally — early in Pittsburgh's 19-9 victory. Hockenson came across the field and dove into Watt's legs on a running play. The contact created what Watt described as “discomfort” in his knee, and he was taken out of the game shortly thereafter as a precaution.

Watt, who practiced on Wednesday and should be fine for Pittsburgh's season opener in Cincinnati on Sept. 11, said Hockenson apologized immediately after the play.

“(He said) like, ‘Sorry I had to do that,’ something like that,” Watt said. “And I just didn’t really have any words to say back to him. More frustration than anything.”

Watt called the blocks “tough to deal with” but declined to pick a side when asked if they should be allowed. The blocks have become a hot topic of sorts after the New York Giants lost rookie defensive end Kayvon Thibodeaux for a month after he was injured on a similar play against Cincinnati earlier in the preseason. Watt said he was aware of Thibodeaux's injury, but hadn't watched a replay.

“I don’t really want to get in the weeds and either what should or shouldn’t be legal in football,” said Watt, who tied an NFL record by getting 22 1/2 sacks last season. “But like I said, I’d have to find a way to be better in that situation to protect myself.”

Watt knew the block was coming. He and Hockenson maintained eye contact as Hockenson closed in. When Hockenson went low, Watt essentially had nowhere to go.

“It obviously is being taught because it’s a legal move,” Watt said. “So I don’t really have any grudge against it. I just have to figure out how to handle it.”

Watt said he didn't consider simply stepping out of the way in order to protect himself even if the play happened in essentially a meaningless game for a player whose roster spot has never been in doubt since being drafted in the first round in 2017.

“I’ll never shortchange the game, whether it’s a preseason or a regular-season game, and that’s why when the switch is flipped on, I don't really care if it's the preseason or not, you're just playing football.”

NOTES: LB Malik Reed and OL Jesse Davis were on the practice field on Wednesday less than 24 hours after being acquired in trades. Reed will play a reserve role on the outside behind Watt and Alex Highsmith while Davis provides depth and versatility for a line that struggled at times during training camp.