Steelers will have to fix leaky run defense without Tuitt 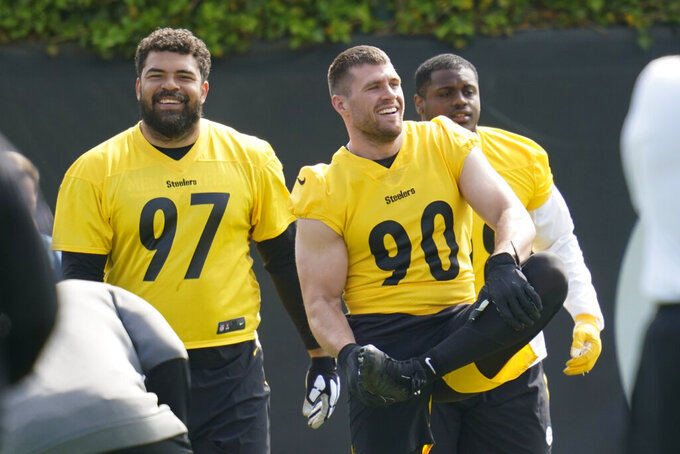 Pittsburgh Steelers' Cam Heyward, left, and T.J. Watt, center, share some laughs as they warm up during an NFL football practice, Tuesday, May 24, 2022, in Pittsburgh. (AP Photo/Keith Srakocic)

PITTSBURGH (AP) — Cam Heyward knew it wasn't his place to try to convince Stephon Tuitt to return to the NFL.

The Pittsburgh Steelers Pro Bowl defensive lineman's hope, however, was that if his longtime running mate could find his way into the locker room at some point this spring, the sense of brotherhood that is an intrinsic part of being a part of a team would re-ignite Tuitt's spark.

Tuitt ended up never walking through those doors. Instead, he spent the offseason finishing up his degree from Notre Dame before retiring on Wednesday at age 29, saying he felt he was being called to do something else with his life.

It's a decision Heyward and the others closest to Tuitt understand, even if the abruptness of it all came as a bit of a surprise. When the Steelers began organized team activities last week, Heyward predicted Tuitt would return “sooner or later.” Fast forward nine days and turns out Tuitt won't return at all.

“I can't be mad at a guy for not wanting to come back,” Heyward said Thursday. “That said, it's just unfortunate (that I said he would) ... I would have loved to have him back.”

Tuitt's very personal choice, one he made after sitting out the entire 2021 season while dealing with a knee injury and the death of his younger brother in a hit-and-run accident in Georgia last June, leaves the Steelers with a very professional problem.

The NFL's worst run defense a year ago had hoped the presence of Tuitt and Tyson Alualu — who missed all but five quarters of last season after fracturing his right ankle in Week 2 — would solve many of the problems they faced last season.

While Alualu will suit up for a 13th season at age 35, Tuitt will not be along for the ride, putting the Steelers in a bit of a bind less than two months from the start of training camp.

Pittsburgh did re-sign Montravius Adams to a two-year deal in March and selected DeMarvin Leal in the third round of the draft, but opted to otherwise focus on other areas of need during the offseason.

Now, most of the notable free-agent defensive linemen are spoken for, meaning the Steelers will have to address a longtime strength that suddenly became a weakness last season with largely the same cast.

It's a challenge Chris Wormley eagerly accepts. He racked up a career-best seven sacks last season and figures to continue to have an expanded role with Tuitt now a part of the team's past and not the present. He also added 5 to 7 pounds to his 6-foot-5 frame, a hint that he's focused on being more of a difference-maker against the run.

“I'm going into (my sixth season),” Wormley said. “For me, the clock is ticking when it comes to being able to produce and making a life for yourself.”

Isaiahh Loudermilk, a bit of a surprise as a fifth-round pick last season, will likely also get an opportunity to take that “leap” that Steelers head coach Mike Tomlin expects players to make as they move from year one to year two.

“You know, you can't really stop your growth,” Loudermilk said. “Whether it's pass rush, run defending or just all around.”

Wormley also believes Alualu's return, the arrival of linebacker Myles Jack in free agency and a fully healthy Devin Bush — who struggled at inside linebacker at times last season after missing most of 2020 with a torn ACL in his left knee — and the hiring of former Miami Dolphins head coach Brian Flores as a senior defensive assistant will give the Steelers a little more thump when teams try to run.

“I'm excited for Tyson to come back and be his old self, which I think he's working towards,” Wormley said. “I think we'll do just fine with the run.”

Pittsburgh will have someone replace Tuitt on the field, just as it did last year. Finding someone to replace him off the field is another matter. His sense of humor and gregariousness were infectious. That will be missed just as much as the tenacity he brought to every snap.

Yet if Heyward has learned anything since being taken in the first round in 2011, is that the game marches on. He became the longest-tenured Steeler when quarterback Ben Roethlisberger retired in January. The list of teammates he has a lengthy history with is waning. His intent to stick around and help a defense regain some of its swagger has not.

“Nothing's changed in me,” the 33-year-old Heyward said. “We've got guys like that guy Loudermilk, you know, Tyson. We've got a great group of guys and I just want to be part of the ride. Obviously, that means I've got to play at a certain level, and I plan on doing that from here on out.”