Steelers WR Johnson: no issues with Trubisky after dust-up 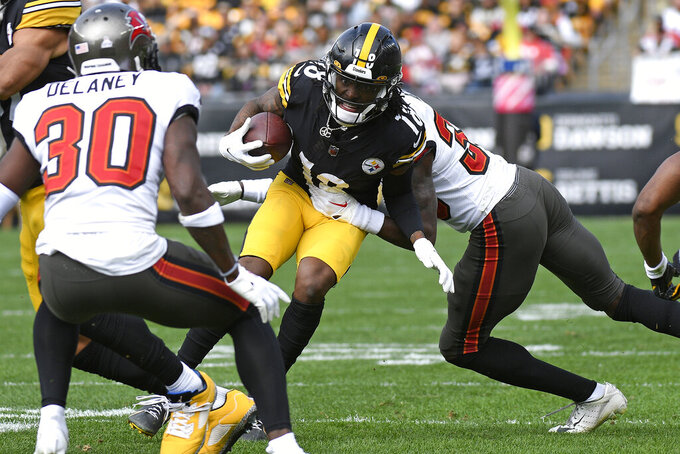 Pittsburgh Steelers wide receiver Diontae Johnson is tackled after a catch during the first half of an NFL football game against the Tampa Bay Buccaneers in Pittsburgh, Sunday, Oct. 16, 2022. (AP Photo/Don Wright)

PITTSBURGH (AP) — Pittsburgh Steelers wide receiver Diontae Johnson says he and quarterback Mitch Trubisky are fine following a confrontation at halftime of a loss to the New York Jets earlier this month.

Johnson said Wednesday he has no ill will toward Trubisky, who was benched in favor of rookie Kenny Pickett against the Jets in what ended up a 24-20 loss to New York.

The Pittsburgh Post-Gazette reported, citing anonymous sources, that Johnson challenged Trubisky to throw him the ball more. The newspaper reported Trubisky then got into an argument with Johnson.

“We’re both passionate about the game," Johnson said. "Stuff happens during football. We’re fine. We talked about it. We made up over the whole situation. There are no hard feelings toward each other."

Steelers coach Mike Tomlin opted not to confirm or deny the report on Tuesday.

It's unclear whether the clash between Trubisky and Johnson played a role in Tomlin benching Trubisky in favor of Pickett. Tomlin has said repeatedly he was simply looking for a “spark.”

Trubisky, who did not speak to reporters on Wednesday, returned to play last Sunday after Pickett went down in the third quarter against Tampa Bay with a concussion and threw for 144 yards and a touchdown in an upset win.

Johnson praised Trubisky's approach and stressed he is “going to keep cheering" for Trubisky in whatever role he has going forward.

“Whatever it is he needs me to do to make him look good out there, I’m going to do it," Johnson said. "There is no bad blood between us at all. It’s just us being football players. We’re not going to let that stop us from achieving the goal we’re trying to achieve around here.”

Pickett practiced on Wednesday and is expected to start on Sunday in Miami if he clears the concussion protocol.

Johnson was far more productive when Trubisky started. Johnson, a Pro Bowler for the first time in 2021, had 21 receptions for 196 yards during Pittsburgh's first three games. Those numbers have dipped to 12 receptions for 99 yards over the Steelers' past three games, which featured Pickett playing in nine of a possible 12 quarters.