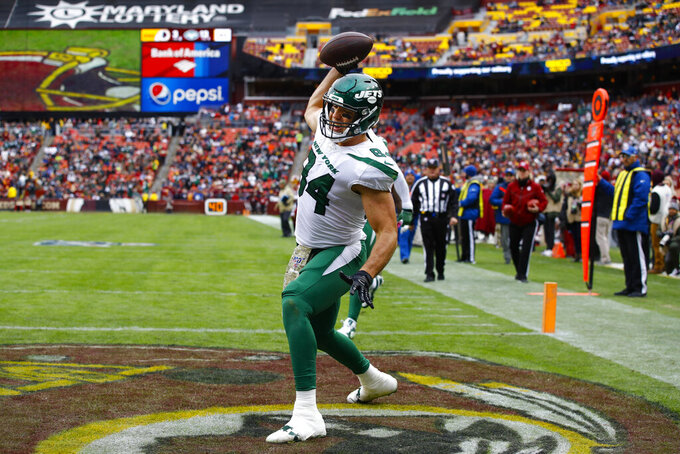 FILE - In this Sunday, Nov. 17, 2019 file photo, New York Jets tight end Ryan Griffin (84) celebrates his touchdown during the first half of an NFL football game against the Washington Redskins in Landover, Md. Ryan Griffin has been so sure-handed lately for the New York Jets that he ended up on a T-shirt. Griffin had five catches for 109 yards — the first 100-yard game of his seven-season career — and a touchdown at Washington. He has 25 receptions for 269 yards and career-high four TDs while becoming reliable target for Darnold in the absence of the injured Chris Herndon. (AP Photo/Patrick Semansky, File)

FLORHAM PARK, N.J. (AP) — Ryan Griffin has been so sure-handed lately for the New York Jets that he ended up on a T-shirt.

Catching touchdown passes certainly helps. But capping them with celebrations that go viral get everyone’s attention.

“He's been awesome for us,” quarterback Sam Darnold said Thursday, “and he's looking to have another big game this weekend.”

Griffin had five catches for 109 yards — the first 100-yard game of his seven-season career — and a touchdown at Washington. He has 25 receptions for 269 yards and career-high four TDs while becoming a reliable target for Darnold in the absence of the injured Chris Herndon.

Oh, and that touchdown last week was what everyone was still talking about, even a few days later.

A wide-open Griffin caught a laser of a pass from Darnold and the tight end got into the end zone for a 16-yard score. He bounced up from the grass and went to spike the football, but pretended it was stuck to his right hand before “prying” it free with his foot. The celebration quickly made the rounds on social media and the highlight reels.

“Yeah, everybody's asking me, ‘Did you really have Stickum on?’” Griffin said with a big smile. “I was like, ‘No! That'd be against the rules.’ They check us before we go out there. I'm glad I executed it that well that people are confused as to whether I had Stickum on.

“That means it went according to plan.”

Griffin came up with the idea with the help of his former UConn teammate Stephen Brown, a former offensive lineman who suggested the tight end use the celebration that was popular in the “Madden NFL” video games.

So well that Griffin had a package waiting for him earlier this week from 500 LEVEL apparel company, which produced a green T-shirt with a picture of the tight end in his spike pose and the words “Sticky Hands Griffin” in the background. Griffin wore it in the locker room while speaking to the media.

It’s also an unexpected perk in a season during which he has gone from an afterthought to a key member of the offense. Not bad for a guy who wasn’t even with the Jets until the day before training camp opened in July.

“It’s been a lot of hard work, to be honest, and practice reps, which are building up now,” Griffin said. “I didn’t get a whole lot of first-team reps in camp, but now that we’re getting more time out here every day, just practicing and stacking those reps I didn’t get before, that’s helping.”

The 29-year-old Griffin was a sixth-round draft pick of Houston in 2013 and had some productive seasons with the Texans over six years. He set career highs with 50 receptions and 442 yards receiving in 2016, but then had only 37 catches over the next two seasons.

Griffin faced some legal issues in Tennessee in April when Nashville Police arrested him for drunkenly punching out a front window of a downtown hotel. Charges of vandalism and public intoxication were later dismissed.

He was released by Houston in May and was unemployed until the Jets brought him in two months later, presumably to compete for a backup spot behind Herndon. But Herndon was suspended the first four games of this season for violating the NFL substance abuse policy, and then injured a hamstring before he was due to return. When he finally did come back, Herndon broke a rib in a game and landed on season-ending injured reserve.

Meanwhile, Griffin was gradually building a big-time rapport with Darnold.

“I didn't know much about him before we picked him up, then we got him and right when he got in here, I knew the kind of guy he was, first and foremost,” Darnold said. “I knew he was going to work hard, do all the right things off the field. And then once he got on the field, I knew we had a special guy in this locker room and special player.”

Griffin’s performance last week was the first 100-yard game by a Jets tight end since Dustin Keller in 2011. If he can produce another Sunday against Oakland, he’d be the franchise’s first tight end to do so since Richard Caster in 1974.

“He just does a good job of doing the right thing at the right time, a lot of the time,” coach Adam Gase said. “He’s a smart player, he executes the plays very well almost every time we’re put there, and he makes himself available to the quarterback. Obviously, there’s a lot of trust there.”