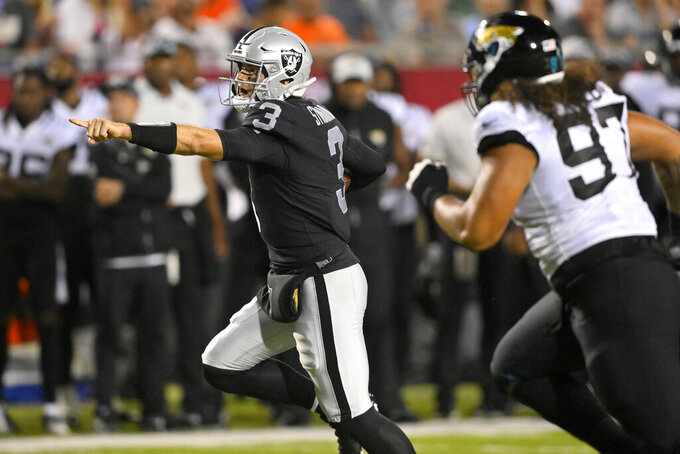 That hasn’t stopped him from performing like an incoming starter for the Raiders.

After all, when you might understand a new offensive system better than anybody coming into training camp, there’s an edge that established confidence.

“I think my biggest focus right now is just to compete every single day with these guys, push all of them as much as I can and help them along the way and just compete and play ball,” said Stidham, who spent the first three seasons of his career in New England.

“I mean that’s all I can focus on right now, it’s all I can control. I’m happy to finally be healthy and just be back out there on the field and just playing football, so it’s a lot of fun.”

Stidham had plenty of fun in his first outing with the Raiders, completing 8 of 15 attempts for 96 yards during Las Vegas’ 27-11 win over Jacksonville in the Hall of Fame Game.

His highlight reel, however, came late in the second quarter when he scampered 12 yards for a touchdown, bringing an ear-to-ear grin to starting quarterback Derek Carr’s face.

“It was great,” Stidham said. “Basically all 21 other guys were running to my left, and I just ran right and it’s just kind of how it worked out. So I was happy about it.”

Now, happy to be in Las Vegas, Stidham joins a coach who molded his offensive game since the Patriots drafted him from Auburn in the 2019 draft, when Josh McDaniels was still the offensive coordinator in New England.

After appearing in a total of eight games, backing up Tom Brady and Cam Newton in his first two seasons, Stidham missed last year after back surgery kept him from competing with Mac Jones.

Then, one morning in May while working out, Patriots coach Bill Belichick told him they were shipping him “to Vegas to Josh and them.”

Stidham, who turned 26 on Monday, now finds himself in competition with Nick Mullens and Chase Garbers for the backup role behind Carr but what has proved to be beneficial is knowing how McDaniels expects his offense to be run.

“I’ve tried to be as helpful as possible because I know when I was in Chase’s shoes my rookie year, Brian Hoyer, Tom Brady, these guys really helped me in the offense and just learn how to be a pro,” Stidham said. “That’s what I’ve tried to help with Chase; and then obviously with Nick (Mullens) and Derek (Carr), those guys being vets, just trying to help them as much as I can with little things. And that goes along with anybody really, running backs, tight ends, receivers, O-line, I just try to help out as much as I can where I can.”

That said, his familiarity with McDaniels’ offense doesn’t automatically give him an upper hand in the hunt for the backup spot, as there are certain intangibles that come with installing a system into a new team.

“It’s something that he has to learn that evening and study that night to really get. Now, obviously, the operation stuff gives him some advantage, but how does he take advantage of that? Knowing that it is taking it to the next step of doing the actual things we talked about as a quarterback.”

Such as communication with an offensive line that has plenty of question marks a month before the start of the regular season.

Or little things that are not only assignment-based, but also in understanding the bigger picture with the new personnel he’s working with and understanding his role with a new set of receivers in the event he has to replace Carr.

Stidham’s football IQ and eagerness to learn aren't being overlooked.

“Great kid, smart, works hard at the game,” McDaniels said. “Understands what he’s trying to do, ran the offense pretty efficiently the other night. Took care of the ball, made some plays with his legs. I see him as a young player who’s continuing to develop and improve. We have not reached his peak yet. We have a lot of players on our team I’d say that about, but certainly, Jarrett is one of them.”