Super Bowl odds on everything from Gatorade to lineman TDs 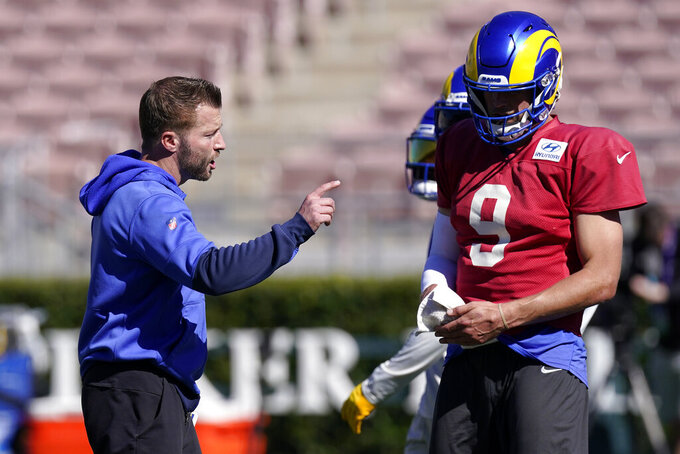 LOS ANGELES (AP) — Will Joe Burrow or Matthew Stafford throw for more yards? Will the Super Bowl MVP be a quarterback or a player from another position? Will an offensive lineman score a TD and what color Gatorade will be thrown on the winning coach?

When it comes to the Super Bowl fans can bet on just about anything, including whether the game will be a “Scorigami” with a final score that has never happened before in an NFL game or whether either coach will use all six timeouts in regulation to more standard bets such as how many yards receiving will Cooper Kupp have or who will win MVP.

Here's a look at some of the more intriguing prop bets with the odds from FanDuel Sportsbook:

Predictably the top two choices for MVP are Stafford at 5-4 and Burrow at just more than 2-1. That makes sense considering 11 of the past 15 winners have been quarterbacks.

The last non-QB to win it came three years ago when New England receiver Julian Edelman took the prize. The last defender to win was Denver's Von Miller six years ago and the last running back to do it was Denver's Terrell Davis 24 years ago.

A couple of intriguing longer shots are Bengals running back Joe Mixon (40-1) and receiver Tee Higgins (60-1).

There are 1-3 odds that a QB will win the MVP compared to just over 2-1 that it will be a non-quarterback.

Teams have traditionally started slow in Super Bowls with only three teams in the past 21 years scoring a TD the first time they had possession.

There are even odds on whether the final score will be a “Scorigami” — a score that hasn't ever happened in an NFL game. There have been 1,072 unique scores in NFL history with the last time it happened in the Super Bowl coming eight years ago when the Seahawks beat the Broncos 43-8.

The odds of a Scorigami happening this year are 12-1 compared to 1-35 odds of a repeat score.

There are more traditional player prop bets in regards to yardage gained, touchdowns and other stats.

For rushing, the over-under for yards is set at 64.5 for Akers and 60.5 for Mixon. Akers' high in four games this season is just 55 yards, while Mixon has topped his number 10 times in 19 games.

This was a record-setting season for offensive linemen catching TD passes with seven players doing it, including two in the postseason. But it's never happened in a Super Bowl, leading to a hefty 20-1 payout if it happens Sunday.

It's been a while since either the Rams or Bengals throwing a TD pass to an offensive lineman with the Bengals last doing it in 2010 on a throw to current Rams tackle Andrew Whitworth and the Rams in 1999 when Ryan Tucker caught two.

Ever since the Giants players doused coach Bill Parcells with a Gatorade shower following a Super Bowl win 36 years ago, it has become a near annual tradition for the winning coach.

The question for Sunday is what color liquid will be used if it happens on Sunday to either Sean McVay or Zac Taylor. Orange is the leading contender with odds of about 2-1, followed by yellow, green or lime (about 3-1), blue (about 4-1), clear or water (about 5-1) and red or pink (about 8-1).

That bet is only valid if the shower is shown on the broadcast.

Rams fans frustrated by McVay's liberal use of timeouts early in halves can try to capitalize on it during the Super Bowl.

The odds that McVay will use all six timeouts in regulation are just less than 3-1. The odds have Taylor as less likely to use all his timeouts at about 3 1/2-1.

By Rob Maaddi 19 minutes ago
By Josh Dubow an hour ago
By David Brandt 6 hrs ago
By Teresa M. Walker 6 hrs ago
By Tom Withers 17 hrs ago