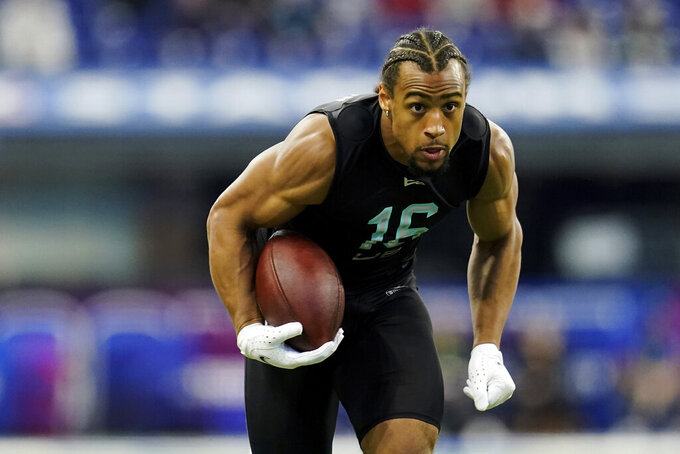 FILE - Washington defensive back Kyler Gordon participates in a drill at the NFL football scouting combine in Indianapolis, March 6, 2022. Gordon is a potential pick for the Cincinnati Bengals in next week’s NFL draft as the team seeks depth at the cornerback position. (AP Photo/Steve Luciano, File)

LAST SEASON: Bengals coach Zac Taylor entered his third year under considerable pressure to show results — and he did. With a (generally) healthy quarterback Joe Burrow returning from a devastating knee injury that prematurely ended his rookie season in 2021, and eventual Offensive Rookie of the Year Ja'Marr Chase, Cincinnati wasn't quite a juggernaut. But it got hot in December and rode the momentum all the way to the Super Bowl, prevailing in some exciting playoff nail-biters. The team's glaring need was an upgrade to an offensive line that couldn't protect Burrow and consistently establish lanes for workhorse running back Joe Mixon. Burrow was sacked a league-high 70 times in 20 games.

OUTLOOK: The Bengals have a retooled offensive line but wouldn't be adverse to adding more guys to that unit, especially if Linderbaum is still available. What they need is cornerbacks after cutting the oft-injured Waynes and losing some depth to free agency. Apple was re-signed but he had consistency problems last season. Cincinnati added franchise building blocks Burrow and Chase with its initial picks the last two years. With the 31st pick this time the Bengals are hoping to get a cornerback who will compete for a starting role with Apple and make a difference right away. The Bengals also may also have their eye on some defensive linemen.