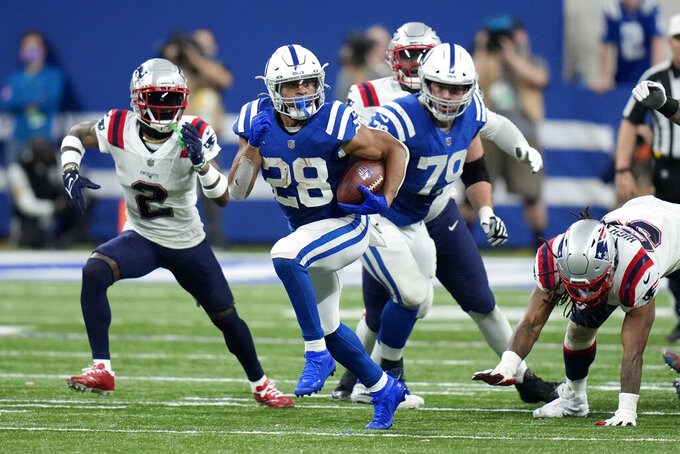 Indianapolis Colts running back Jonathan Taylor (28) runs for a 67-yard touchdown during the second half of an NFL football game against the New England Patriots Saturday, Dec. 18, 2021, in Indianapolis. (AP Photo/AJ Mast)

BETTING LINE: Cardinals by 1 1/2, according to FanDuel SportsBook.

AGAINST THE SPREAD: Indianapolis 9-5; Arizona 9-5.

TURNOVER DIFFERENTIAL: Colts plus-14; Cardinals plus-10.

COLTS PLAYER TO WATCH: Jonathan Taylor. The second-year running back is the NFL’s leading rusher -- and he’s on a history-seeking quest. If he runs for 100 yards and scores a TD for the ninth time this season, he’ll tie Earl Campbell, Terrell Davis, Larry Johnson and LaDainian Tomlinson for No. 4 in NFL single-season history. If he scores twice, he’ll break the franchise’s single-season record for total TDs (20), set by Hall of Famer Lenny Moore in 1964.

CARDINALS PLAYER TO WATCH: Kyler Murray. The quarterback earned his second Pro Bowl selection on Wednesday but didn't play like one in last weekend's lopsided loss to the Lions. Murray wasn't terrible against Detroit, completing 23 of 41 passes for 257 yards, one touchdown and one interception, but the Cardinals need more. They also need the third-year QB to be careful with the ball because the Colts lead the NFL with a plus-14 turnover differential.

KEY MATCHUP: Colts QB Carson Wentz vs. Arizona pass rush. Wentz didn't need to do much through the air against the Patriots as the Colts built a big early lead and stayed on the ground for the rest of the game. The Colts will probably need more production against the Cardinals, who have two of the league's top pass rushers in Chandler Jones and Markus Golden. The Cardinals have 37 sacks as a team, fifth in the league.

SERIES NOTES: Colts coach Frank Reich coached with Arizona in 2012. ... Five days after his oldest son, James, was buried in 2005, Hall of Fame coach Tony Dungy returned to the sideline and got the goal-line stand he needed to beat the Cardinals in the 2005 regular-season finale.

STATS AND STUFF: Indianapolis has won five of its last six and now holds the No. 5 spot in the AFC playoff chase. ... Taylor needs one 100-yard game to tie Edgerrin James for the second most in Colts history in one season. With 141 yards rushing, Taylor also will climb from fifth to second in team history for single-season yards. He enters Saturday with 1,518 yards. ... WR Michael Pittman Jr. can post his first 1,000-yard season with 111 yards receiving. He was ejected in the third quarter of last week’s victory over New England. ... WR T.Y. Hilton needs seven receptions to tie Hall of Famer Raymond Berry for No. 3 in Colts history (631). ... Two-time All-Pro LB Darius Leonard needs three tackles to surpass Duane Bickett (524) for fifth on the Colts’ career tackles list. ... Indy has scored 398 points this season, just 12 behind league-leading Tampa Bay. ... The Colts lead the NFL in turnover margin, points off turnovers (122), yards per carry (5.21) and are No. 2 in penalties (64). They’ve also returned two blocked punts for scores in the past five games. ... The Cardinals will try to clinch a playoff spot for the third straight week after losing to the Rams and Lions. Arizona is seeking to make the postseason for the first time since 2015. ... The Cardinals have an 0-4 record under coach Kliff Kingsbury when trying to clinch a playoff spot. ... The Cardinals and Colts are tied for the NFL lead with 21 rushing TDs each. They're also tied for tops in the league with just eight rushing TDs allowed. ... The Cardinals have played on Christmas Day two other times in 1995 and 2010. In the 2010 game, they beat the Cowboys 27-26 on a 48-yard field goal by Jay Feely in the final seconds of regulation. ... Cardinals safety Jalen Thompson already has 104 tackles this season, a career high. ... Golden has nine sacks over his past nine games.

FANTASY TIP: Cardinals WR Christian Kirk had a productive day in last week's loss to the Lions, catching nine passes for 94 yards and a touchdown. He's the likely top option for Murray against the Colts with Hopkins out with a knee injury.