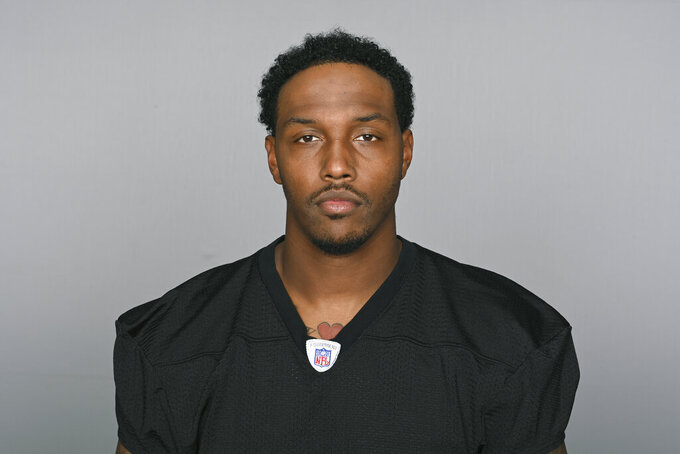 FILE - This is a 2021 photo showing Taco Charlton of the Pittsburgh Steelers NFL football team. Taco Charlton knows his career hasn't turned out the way he envisioned after being taken in the first round in 2017. Four years and four teams later, the outside linebacker has made an impression in Pittsburgh (AP Photo/File)

PITTSBURGH (AP) — This isn't the career Taco Charlton had in mind. The Pittsburgh Steelers outside linebacker knows players taken in the first round of the NFL draft aren't supposed to bounce through four teams in five years.

Yet here Charlton is, playing backup to T.J. Watt, selected two spots behind Charlton in the 2017 draft.

While Watt has become a perennial All-Pro and one of the highest-paid defensive players in the league, Charlton is still searching for a place to stick. Charlton, who turns 27 on Sunday, has made peace with his journey.

“When I go out here, I don't go out here thinking like, ‘Oh, I was a first-round pick' (who hasn't made it)," Charlton said Friday. “I just go out here like, you know, I can play good football. (The draft) was so long ago that I don't really think about it as much.”

Maybe because there's not much to remember. He struggled to find a role in two seasons with the Cowboys. Ankle and shoulder injuries didn't help. Neither did a maddening lack of consistency. At one point, Dallas owner Jerry Jones said the team's scouting department kept waiting for “a major light to come on.”

It didn't. At least not with the Cowboys, who cut him early in the 2019 season. The Dolphins scooped him up, but again Charlton failed to find a niche. He appeared to be on his way to doing it in Kansas City last fall, collecting two sacks and forcing a fumble in seven games before an ankle injury ended his season and blunted his momentum.

Kansas City released Charlton in August and he was unemployed for a month before the Steelers signed him to the practice squad in late September.

“They said if I show them what I can do, there's a chance for me to play some good ball here,” Charlton said.

That chance arrived last Sunday against Cleveland. With veteran Melvin Ingram out of the mix with what the team called a groin injury — though Gordon had reportedly asked for a trade because of a diminished role — Charlton was promoted to the 53-man roster and found himself on the field for 10 snaps.

While he technically did not record a statistic, Charlton believes he got a hand on the ball Jarvis Landry was carrying just before the Cleveland wide receiver fumbled it away in the fourth quarter, though technically the forced fumble was given to linebacker Joe Schobert.

“I'm just happy it happened,” Charlton said. “Whether me or Joe got it, either way I'm happy it happened. It was a big turnover at a big time in the game and it changed, you know, the whole chemistry of the rest of the game.”

And maybe changed the alchemy of Pittsburgh's linebacking corps in the process. By Tuesday afternoon, Ingram had been traded to Kansas City and Charlton found himself with a full-time roster spot and an increased role for a team that might be getting it together. The Steelers (4-3) have won three straight heading into a visit by Chicago (3-5) on Monday night.

While defensive coordinator Keith Butler stressed Charlton is “doing well,” he's still learning the intricacies of Pittsburgh's 3-4 scheme. Whether Charlton's stay in town becomes more than a cameo depends largely on all the parts of his job that don't involve rushing the passer. The Steelers need the rangy 6-foot-6 Charlton to get comfortable in coverage. It's not something that happens with the flick of a switch.

“There’s a little bit more to it than playing with your hand down all the time,” Butler said.

Charlton has a pretty good tutor in Watt. Charlton says he and Watt “pick each other's brain on a lot good things," though Charlton added he's quick to make sure he doesn't try to measure himself against the three-time Pro Bowler and former draft classmate.

“We play the same position, but we differ at the same time. I mean, I’m a lot bigger,” said Charlton, who is 2 inches and 20 pounds heavier than Watt. “Our bodies move a lot different.”

And they are at very different points in their respective careers. Watt is an established star and likely the face of the franchise whenever quarterback Ben Roethlisberger retires. Charlton is just trying to prove he's not a bust, but simply a late bloomer.

“I still feel like I've played great football and I've got a lot of good football ahead of me,” he said. “I just try to go out there with that mindset and show what I can do and eventually hopefully I show some good things, enough where the team likes it and the Steelers like it enough to keep me going forward.”

NOTES: K Chris Boswell, who went into the concussion protocol after getting drilled during a failed fake field goal attempt in Cleveland, was a full participant Friday. ... TE Eric Ebron (hamstring) was limited.