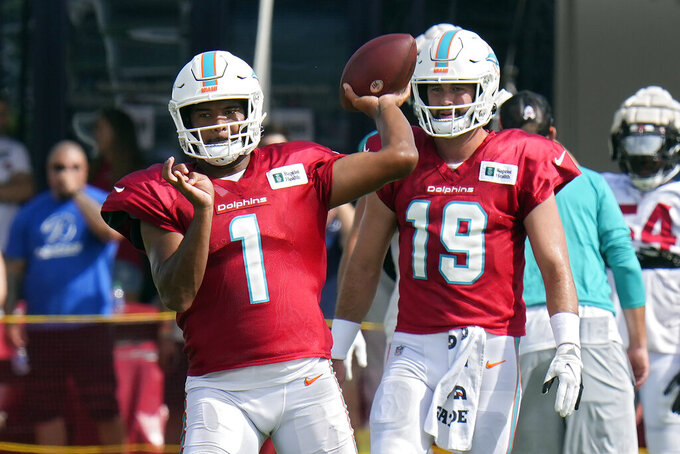 TAMPA, Fla. (AP) — Tua Tagovailoa would rather chat with Tom Brady than answer questions about him taking his job.

Tagovailoa spent time talking with Brady while the Miami Dolphins and Tampa Bay Buccaneers held a joint practice Wednesday. He had a simple reply when asked about Miami being penalized for tampering with Brady.

“I’m still here. To me, that’s all noise at this point,” Tagovailoa said.

Last week, the NFL suspended Dolphins owner Stephen Ross through Oct. 17, fined him $1.5 million and docked the team a first-round pick in the 2023 draft and a third-round selection in the 2024 draft for talking to Brady while he was under contract with the Patriots in 2019 and Buccaneers in 2021.

The league’s investigation determined the Dolphins had impermissible communications with both Brady and his agent, Don Yee, no later than early December 2021 and after the season, while he was under contract to the Buccaneers.

Brady, who turned 45 last week, briefly retired after last season. He hasn’t spoken to reporters since the league punished the Dolphins but the seven-time Super Bowl champion spoke to Tagovailoa on the field.

“We were talking on the side for a good bit,” Tagovailoa said. “He was just asking how the offseason was. We were talking a little about golf at the same time. But for the most part, 23 years playing, that’s a long time. That’s a lot of knowledge, so I was asking him some things and he gave me some good insight on. I’m going to keep that between me and Tom. Then if you guys want to ask Tom, you can go ask him.”

Tagovailoa said Brady’s “composure in the pocket” impressed him the most.

“Nothing really rattles him. When you have a guy in your face, he’s just – subtle movements and throwing the ball,” Tagovailoa said. “I would say those are top trait qualities in a really good quarterback with him, Russ (Russell Wilson), Aaron Rodgers, all of those big-time guys.”

The Dolphins and Buccaneers will practice again Thursday ahead of their preseason opener Saturday night.

“For me, nothing happened,” he said. “Everyone else is the one making it awkward. It doesn’t occupy a single iota of space with anybody. It’s hard enough to be good in this league. As the Miami Dolphins, all of our energy is very coordinated and only has to do with us getting better and everything else would be an opportunity cost that we’re not willing to expend.”