Tagovailoa to prepare this week as Dolphins starter 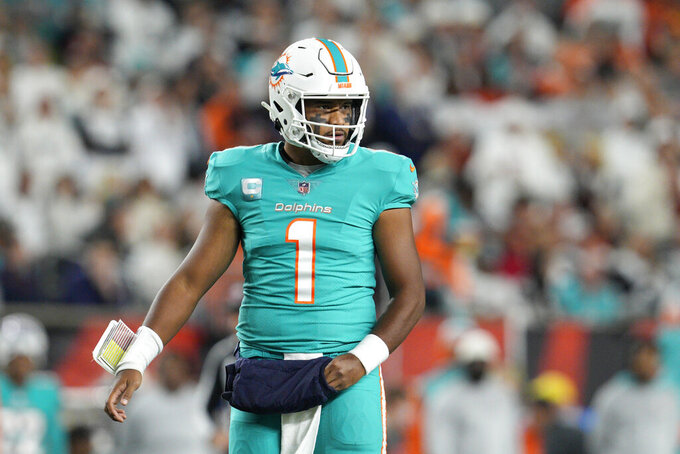 Miami Dolphins quarterback Tua Tagovailoa looks to the sidelines during the first half of an NFL football game against the Cincinnati Bengals, Thursday, Sept. 29, 2022, in Cincinnati. Tagovailoa suffered a second frightening injury in five days when he was carted off the field Thursday. (AP Photo/Jeff Dean) 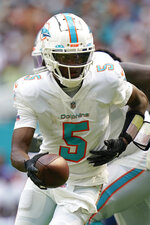 MIAMI GARDENS, Fla. (AP) — Tua Tagovailoa is back, and his return will be a welcome sight for a Dolphins team that has not won a game since he suffered a concussion on Sept. 29.

Tagovailoa will go through practice this week as the Dolphins starter, and assuming all goes well, he is expected to start Sunday night against the Pittsburgh Steelers.

“He’s a captain for a reason,” Dolphins coach Mike McDaniel said. “I think he’s a very, very good player at that position. Very good players, they definitely give people a boost, not because of what other people aren’t, but because he is who he is.”

Tagovailoa returned to practice on a limited basis last week. He had been in the concussion protocols since getting hurt and needing to be taken off the field on a stretcher against the Cincinnati Bengals in Week 4.

Tagovailoa was limited in practice Wednesday and Thursday, but was listed as a full participant Friday. He, along with backup Teddy Bridgewater, was medically cleared to return on Saturday after completing all of the return-to-play steps required by the NFL.

After watching Tagovailoa throw the ball in practice, McDaniel said he doesn’t expect him to have much rust from a mechanics standpoint.

“He was really the same guy. Luckily, he didn’t start throwing right-handed,” McDaniel joked about Tagovailoa, who is left-handed.

McDaniel added that he talked to Tagovailoa about conceding plays to protect himself on the field, which he admitted does not come naturally to the third-year quarterback because of his competitive nature.

“He wants to break every tackle, and he doesn’t like when plays don’t work,” McDaniel said. “Well, sometimes they won’t.”

He added: “The guys that set forth the example of how to play the position, they do find ways to be available, and part of that is that concession.”

The Dolphins have lost three straight games, including Sunday's 24-16 home loss to the Vikings.

Rookie Skylar Thompson started that game after Bridgewater was affected by the NFL's amended concussion protocols against the Jets in Week 5. He took a hit on the first offensive play and was placed in the protocols despite not showing any concussion symptoms.

Bridgewater was active Sunday and replaced Thompson in the first half after the third-stringer left with a bloody right thumb. McDaniel said Thompson's injury will be reassessed Wednesday.

Tagovailoa was also there on the Dolphins sideline, but he was inactive.

NOTES: McDaniel said cornerback Nik Needham, who was carted off the field with a torn Achilles tendon Sunday, will go on injured reserve. ... Miami will update defensive back Keion Crossen’s knee injury status later this week. ... Cornerback Byron Jones likely will not practice this week. He remains on the physically unable to perform list after having surgery in March on his lower left leg. ... McDaniel said it was a “step in the right direction” to hold left tackle Terron Armstead out of Sunday’s game as he nurses a lingering toe injury. ... Right tackle Austin Jackson, who was placed on short-term IR last month with a right ankle injury, has not had any setbacks, but McDaniel wants to be cautious about bringing him back too soon.