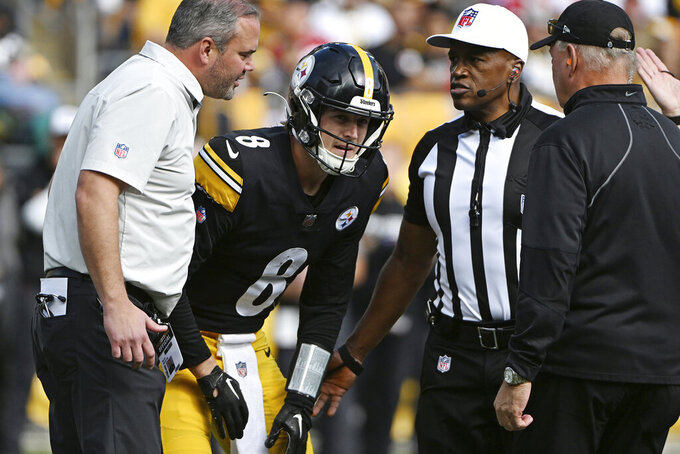 Pittsburgh Steelers quarterback Kenny Pickett (8) is helped on the field after being injured during the second half of an NFL football game against the Tampa Bay Buccaneers in Pittsburgh, Sunday, Oct. 16, 2022. (AP Photo/Barry Reeger)

BETTING LINE: Dolphins by 7, according to FanDuel Sportsbook.

TURNOVER DIFFERENTIAL: Steelers plus-1; Dolphins minus-5

STEELERS PLAYER TO WATCH: WR Chase Claypool. The talented but enigmatic third-year pro put together his best game of the season in last week’s upset over Tampa Bay, catching seven passes for 96 yards and a touchdown. The question with the 6-foot-4 Claypool has never been ability but consistency. Maybe the most impressive part of his performance was effort. He caught the ball all seven times he was targeted, the first time that’s happened since early in his rookie year in 2020.

DOLPHINS PLAYER TO WATCH: QB Tua Tagovailoa. The quarterback will make his first start Sunday since suffering a concussion against the Bengals on Sept. 29. Tagovailoa was off to the best start of his career, throwing for 1,035 yards and eight touchdowns. With Tua as the Dolphins’ starter through the first three weeks of the season, the Dolphins were third in yards per play (6.38) and second in fourth-quarter points (11.7).

KEY MATCHUP: The Steelers’ secondary vs. Miami’s receivers. Jaylen Waddle and Tyreek Hill each have three 100-plus yard games this season, but neither has scored a touchdown since Week 2. Getting them the ball in the red zone should be a focus this week. Pittsburgh has allowed a 100-yard receiver in four games this season.

KEY INJURIES: Steelers rookie QB Kenny Pickett will start after beginning the week in concussion protocol after leaving the game against Tampa Bay in the third quarter. Pickett returned to practice and cleared the protocol Friday. ... S Minkah Fitzpatrick (knee) could return after sitting out last week. Fitzpatrick spent a little more than a year with Miami before being traded to Pittsburgh in September 2019. ... The rest of the starting secondary appears to be getting healthier too. CB Ahkello Witherspoon (hamstring) was doubtful to play, but Cam Sutton (hamstring) and Levi Wallace (concussion) could play. Sutton and Wallace did not play last week, but fully practiced Thursday and Friday, and removed from the injury report. Witherspoon has been out since getting hurt in Week 1. ... OLB T.J. Watt remains out indefinitely with a left pectoral injury. The Steelers are 1-8 when Watt is not in the lineup. ... Dolphins WR Jaylen Waddle (shoulder) was limited in practice this week, and was listed as questionable to play Sunday. ... T Terron Armstead (toe), who didn’t play last week, is still day to day and questionable to play. ... CBs Keion Crossen (knee) was doubtful to play and Kader Kohou (oblique) questionable. Crossen left last week’s game, and Kohou didn’t play at all, contributing to some of Miami’s depth issues at cornerback.

SERIES NOTES: Pittsburgh has won two straight and three of the past five meetings. It’ll be the Steelers’ first game in Miami since 2016, when the Dolphins won 30-15. When the teams met in a Monday night game in 2019, Ryan Fitzpatrick was Miami’s quarterback and Mason Rudolph was Pittsburgh’s quarterback.

STATS AND STUFF: The game marks the return of Steelers senior defensive assistant Brian Flores to Miami. Flores went 24-25 in three seasons with the Dolphins from 2019-21 before getting fired in January. Flores filed a class-action lawsuit against the Dolphins, other teams and the NFL over alleged racist hiring practices about a month after being let go. ... Pittsburgh is 2-4 for just the eighth time since 1970. The Steelers rallied to finish with a non-losing record four times (1976, 2006, 2013, 2019). ... The Steelers have played in 15 one-score games since the start of the 2021 season (three this year), third most in the NFL over that span. Pittsburgh’s 17-6-1 record in one-score games since the start of 2020 is second best in the league. ... Pittsburgh’s pass rush returned last week after largely disappearing in its first four games without the injured Watt. The Steelers sacked Tom Brady twice and knocked him down five other occasions. Pittsburgh had just three sacks in its first three games minus Watt this season. ... The Steelers are 17-10 in October road games since 2007, fourth best in the league. ... Pittsburgh’s running game remains an issue six weeks in. The Steelers are 28th in rushing and yards per attempt, barely ahead of last year’s pace when they finished last (32nd) in both categories. ... Miami hasn’t held an opponent under 50 yards rushing since holding Cincinnati to 40 rushing yards on Dec. 6, 2020. ... After going 0-5 in October games last year, the Dolphins are 0-2 so far this season in October with two games left in the month. ... Since 2018, the Dolphins are 15-6 in games that they are favored in. ... The Dolphins offense has seen a drop in points in the past two games without Tua Tagovailoa. Miami averaged 27.6 points with Tagovailoa and 16 points per game without him. ... RB Raheem Mostert rushed for 79 yards in his previous game against the Steelers, on Sept. 22, 2019, with San Francisco. He has a rushing touchdown in two of three career Sunday night games. He has three straight games against the AFC North with at least 75 scrimmage yards.

FANTASY TIP: WR Tyreek Hill led the Dolphins with a season-high 12 catches for 177 yards last week, which was his eighth career game with at least 10 catches and 150-plus receiving yards, the most ever by a player in his first seven seasons. Hill leads the NFL with 701 receiving yards and is second with 50 catches.