Tannehill focused on Titans' future, not his Miami past 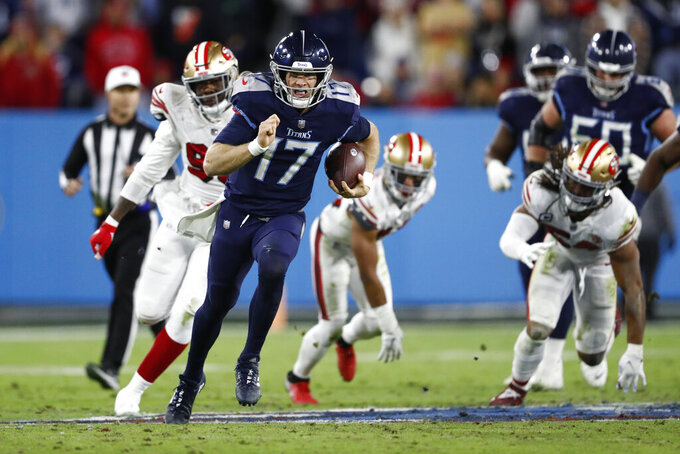 Tennessee Titans quarterback Ryan Tannehill (17) scrambles for a 23-yard gain against the San Francisco 49ers in the second half of an NFL football game Thursday, Dec. 23, 2021, in Nashville, Tenn. (AP Photo/Wade Payne)

NASHVILLE, Tenn. (AP) — Ryan Tannehill has such a bright future that the Tennessee quarterback is in no mood to look back, not when the Titans need one more victory to clinch a second straight AFC South title.

Tannehill finally gets his first chance Sunday to face off against the Miami Dolphins, the team that drafted him eighth overall in 2012 only to trade him in March 2019. The Dolphins, with a new general manager and new coach, even paid $5 million of his $7 million salary that year to unload him.

“That was a long time ago,” Tannehill said Wednesday of his NFL start in Miami. “Ages ago. We have done some good things here and excited to hopefully build on that as we finish out the season.”

The quarterback whose knee injury kept him from playing in the one postseason he helped Miami reach in 2016 can help the Titans (10-5) earn their third straight playoff berth — all with Tannehill at quarterback. Tannehill is 30-15 as a starter since taking over in mid-October 2019 for Tennessee.

The Titans liked what they saw of Tannehill after he replaced Marcus Mariota as their starter in 2019 that they signed him to a four-year extension in March 2020. He's led the Titans on 13 game-winning drives, most in the NFL in that span.

“We want Ryan to be our quarterback for a long time,” Titans coach Mike Vrabel said. “I know he is focused on this week.”

Tannehill started 88 games for Miami with the Dolphins going 42-46 in those games. He threw for 20,434 yards and 123 touchdowns despite being sacked 348 times. When traded, he was second in Miami history behind Chad Pennington completing 62.8 percent of his passes and an 87 passer rating for his career.

This season, Tannehill has been one of the few constants for a team that has used 88 players — most in any non-strike season in NFL history.

Despite being sacked 45 times, he's thrown for 3,327 yards with 15 touchdowns and 14 interceptions. He has either thrown or ran for a TD in 13 straight games and has matched his career best with seven TD runs.

Brian Flores and general manager Chris Grier had been on the job a couple of months in 2019 when Miami decided to move on without Tannehill. Flores said he's not thinking about 2019 now and sees Tannehill as a major challenge for his defense with Tannehill a key piece for the tough, physical Titans.

“His demeanor, his temperament, the way he goes about things, his toughness, I think that shows on their offense,” Flores said. "I think that permeates throughout their team. He’s shown leadership, and this is going to be a tough challenge for us.”

Miami defensive coordinator Josh Boyer said Tannehill can make all the throws and use his legs on designed plays or scrambles. Tannehill had the Titans' longest run last week in their 20-17 win over the 49ers, going up the middle for 23 yards.

Tannehill still has a home in South Florida. Now 33, Tannehill says he grew a lot during his time with the Dolphins, using both the good and the bad to learn.

“I basically spent most of my 20s in Miami,” Tannehill said. “Thankful for that growth. Thankful for my time there and excited to keep pressing forward.”

NOTES: LT Taylor Lewan was activated off reserve/COVID-19 before practice and practiced fully. The Titans put DB Briean Boddy-Calhoun, a member of the practice squad, on that reserve list. Eight active roster players remain on the COVID-19 list. ... LB David Long, who has missed six games with an injured hamstring, practiced fully.