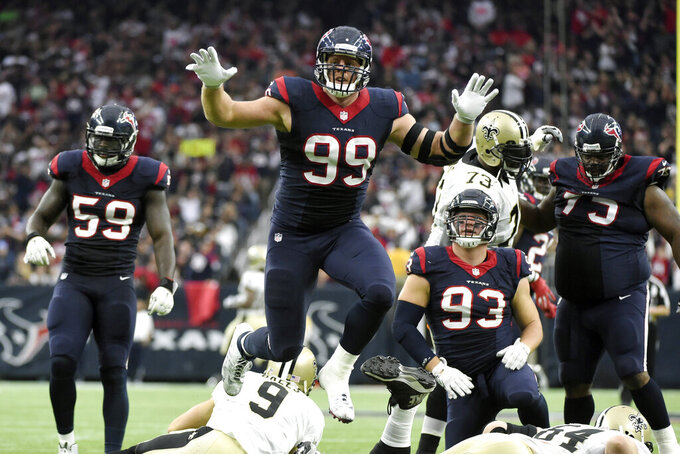 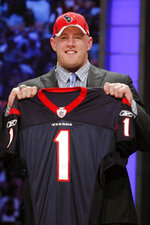 BEST FIRST-ROUND DRAFT PICK: DE J.J. Watt. He was booed by Texans fans when he was selected with the 11th overall pick in the 2011 draft. But it didn’t take Watt long to win over the fan base and become the most beloved Texan of all time. The fearsome pass rusher was the Defensive Player of the Year in 2012, 2014 and 2015. He led the NFL in sacks and tackles for losses in 2012 (20½ and 39) and 2015 (17½ and 29). Watt was selected as the Walter Payton Man of the Year in 2017 after raising more than $41 million for Hurricane Harvey relief efforts. He rebounded from two seasons where injuries limited him to just eight games combined to finish with 16 sacks in 2018 and earn All-Pro honors for the fifth time.

BEST SECOND-ROUND DRAFT PICK: LB DeMeco Ryans. The 33rd pick in the 2006 draft, Ryans led the NFL with 126 solo tackles as a rookie and won Defensive Rookie of the Year. He was selected to the Pro Bowl twice and had more than 100 total tackles in the first four of his six seasons in Houston. Ryans had 43 tackles for losses and 8½ sacks in his career in Houston before signing with the Eagles in 2012.

BEST LATE-ROUND DRAFT PICK: TE Ryan Griffin. He was drafted out of UConn in the sixth round in 2013 and spent six seasons with the Texans. Griffin appeared in 77 games with 36 starts and had 1,491 yards receiving and seven touchdowns for Houston.

WORST FIRST-ROUND DRAFT PICK: DL Travis Johnson. Drafted 16th overall in 2005, Johnson failed to make an impact in four seasons in Houston. Johnson played 54 games with 38 starts but struggled with weight and conditioning and managed just two sacks in his career with the Texans.

WORST SECOND-ROUND DRAFT PICK: OL Xavier Su’a-Filo. The UCLA standout was selected with the 33rd pick in the 2014 draft, three spots ahead of quarterback Derek Carr, but failed to develop into a solid player in four seasons in Houston. He played both left guard and right guard in 56 games with the Texans, but didn’t help improve an offensive line which has had problems for years.

BEST DRAFT TRADE: In desperate need of a franchise quarterback after years of a revolving door at the position, the Texans traded up from the 25th pick to No. 12 in the 2017 draft to nab Deshaun Watson. The Texans gave up a first-round pick in 2018 in the deal, but it was more than worth it to get Watson, who has thrown for 71 touchdowns with just 29 interceptions in three seasons despite missing nine games as a rookie because of a season-ending knee injury.

WORST DRAFT TRADE: It might be too soon to label this the worst trade in the team’s history since it just happened, but right now the March trade that sent star receiver DeAndre Hopkins to Arizona certainly looks bad. Houston received running back David Johnson, a second-round pick in this year’s draft and a fourth-round pick next year from the Cardinals in the deal and sent Arizona a 2020 fourth-round selection. In trading Hopkins, Houston lost one of the NFL’s best receivers who had more than 1,150 yards receiving in five of the past six seasons including a career-best 1,572 in 2018. Hopkins was an All-Pro in each of the past three seasons and his departure leaves a big hole in Houston’s passing game.

DID YOU KNOW THEY ONCE DRAFTED?: WR Braxton Miller. The former star Ohio State quarterback was taken by the Texans in the third round in 2016. Miller was the Big Ten Freshman of the Year in 2011 and the league’s most valuable player in both 2012 and 2013. But a shoulder injury cost him the entire 2014 season and ended his career at quarterback. He moved to receiver in 2015 and had 341 yards receiving and three touchdowns. But Miller was used sparingly in two seasons in Houston with just 34 receptions for 261 yards and was released before the 2018 season.