Texans look to Mills to improve team with Watson gone 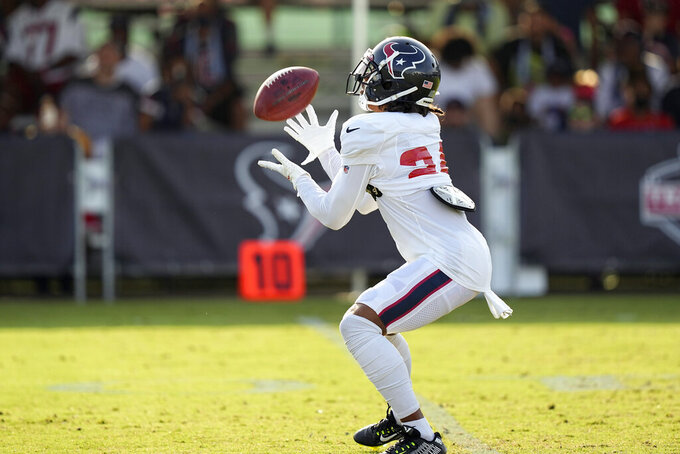 HOUSTON (AP) — New Houston coach Lovie Smith wasn’t upset with Davis Mills when the second-year quarterback recently told a reporter that the Texans were going to “shock the world” this season.

Smith, a veteran of more than 20 NFL seasons, understood the point Mills was trying to make.

“All he’s really saying is guys, we’ve been working hard, we think we’re a pretty good football team,” Smith said. “And if we do well, you’re not picking us to win much. I’d say no one here is. So, it’s going to probably be a shock if that happens.”

It certainly would be stunning to most everyone outside of the organization if Houston does well this season with the team entering the year with the worst odds to win the Super Bowl at 300-1, according to FanDuel.

There is however some optimism around the team after the Texans finally moved on from Deshaun Watson after he sat out all last season amid a trade request and lawsuits from 24 women alleging sexual assault or harassment during massage sessions. Houston got a huge haul in exchange for the quarterback, receiving a package that included three first-round picks in the March trade with Cleveland.

Now that he’s gone, the Texans will use this season to see if Mills can take a step forward and be their quarterback of the future. Mills, a third-round pick from Stanford, had an inconsistent rookie season when he appeared in 13 games with 11 starts.

He finished the season with 2,664 yards passing with 16 touchdowns and 10 interceptions. He improved in the last four games where he threw eight TD passes with just two interceptions.

Now he’s looking to build on that success.

“I’ve developed a lot since the end of last season,” he said. “I think I felt the progression at the end of last year and then really taking it into the offseason, big momentum and stacking on it has allowed me to come out here and start playing really fast ... (and) I’m excited to keep progressing.”

That development should be helped by the return of left tackle Laremy Tunsil, who missed the final 12 games last season with a thumb injury that required surgery.

REVVING UP THE RUNNING GAME

Houston has had the worst running game in the NFL for the past two seasons, but made some additions this offseason to attempt to improve it with David Johnson gone. Marlon Mack is expected to be the starter, but the Texans also added Dameon Pierce, a fourth-round pick and veteran Rex Burkhead.

Pierce has been a standout in camp and ran for 49 yards on just five carries in the first preseason game, leading some to wonder if he could earn the starting job over the veterans.

“You let guys play,” Smith said. “They kind of tell you who should start, who should be on the roster, how many plays they should get ... it’s good competition there. They all have a certain strength, and we’ll let it play out.”

The Texans are looking for their rookie class, led by first-round picks in cornerback Derek Stingley Jr. and offensive lineman Kenyon Green, to make a big impact this season.

Stingley, the third overall pick, has been limited this preseason while recovering from September surgery to repair a torn ligament in his foot. But Smith said he will be ready for the opener.

Stingley was a consensus All-America selection as a freshman in 2019, but was hampered by injury the past two seasons, including being limited to just three games last year at LSU because of the foot injury. Despite the setbacks, the Texans are confident that he’ll be able to step in early and help turn around a secondary that was among the league’s worst last season.

Green, the 15th pick, is also expected to be ready for the opener after missing significant time in camp with a knee injury and a concussion. The versatile Green started every game in three seasons at Texas A&M and played at all five positions along the offensive line.

The Texans will be without second-round pick John Metchie III, after the receiver announced just before camp that he was recently diagnosed with acute promyelocytic leukemia. The former Alabama standout said he was taking time off from football to focus on his health and recovery.

The Texans jump right into AFC South play, opening the season against Indianapolis at home Sept. 11. They’ll make trips to Denver and Chicago after that before returning home to host the Los Angeles Chargers Oct. 2.

On Dec. 4, they’ll host the Cleveland Browns in a game where Watson will be eligible to make his season debut after serving an 11-game suspension.

The following week they’ll visit Dallas for a rare matchup with the Cowboys. These in-state rivals have played just five times, with the previous meeting coming in 2018, and Dallas leads the series 3-2.