Texans look to Mills at QB after trading Watson to Browns 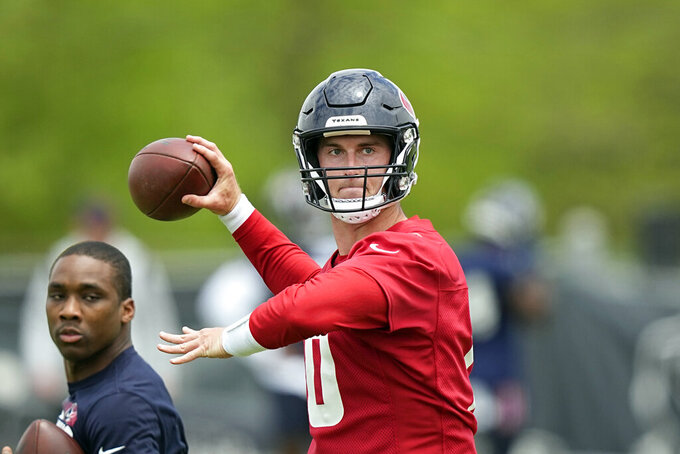 FILE - Houston Texans quarterback Davis Mills throws a pass during a voluntary NFL football minicamp practice Tuesday, April 26, 2022, in Houston. The Texans look to Davis Mills as their answer at quarterback after finally moving on from Deshaun Watson in a trade to Cleveland this offseason.(AP Photo/David J. Phillip, FIle)

LAST YEAR: The Texans won just four games for the second straight season after winning the AFC South the previous two seasons, costing coach David Culley his job after just one year. With QB Deshaun Watson sitting out amid a trade request and multiple lawsuits from women alleging sexual harassment or assault, the Texans relied on Tyrod Taylor early before giving rookie Davis Mills a chance at quarterback. Ineffective play at quarterback paired with a defense that ranked near the bottom of the NFL in the first season without star J.J. Watt left the Texans as one of the league’s worst teams.

CAMP NEEDS: Now that Watson has been traded to Cleveland, the Texans are focused on developing Mills. Houston has committed to him as the starter for this season, but he’ll need to show that he’s made progress in camp after a subpar rookie season. Metchie, a second-round pick, could help Mills in his second season, but must show that he’s healthy after offseason knee surgery. The Texans expect Stingley, the third overall pick in the draft, to step in immediately to improve their secondary, which makes his work in camp particularly important.

KEY CAMP COMPETITIONS: Houston has had the worst running game in the NFL for the past two seasons but made some additions this offseason to attempt to improve it with Johnson gone. Mack is expected to be the starter, but Pierce, a fourth-round pick, could use a good camp to earn some carries behind him and veteran Rex Burkhead this season. Christian Kirksey and Kamu Grugier-Hill are two of the team’s starting linebackers but performance in camp will determine the last spot. Christian Harris, a third-round pick, and offseason acquisition Maybin, are two of the top options for the job.

EXPECTATIONS: Multiple high draft picks and several free agent additions should make the Texans better than they were last season. Smith, the team’s former defensive coordinator, is committed to turning around the defense and believes the additions of Stingley and Pitre, a second-round pick, can transform a secondary that was terrible last year. If the rookies improve the defense and Mills takes a step forward in Year 2, Houston should win a few more games than last season, but it’s unlikely that this young team will be good enough to contend for the playoffs.