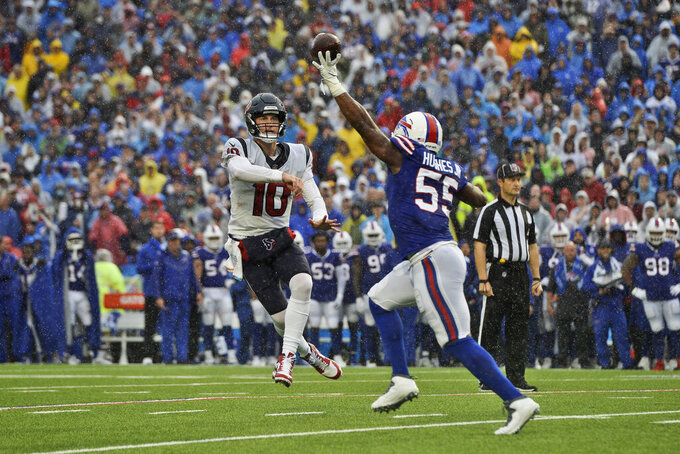 Things didn't go much better for the rookie and the Houston Texans the rest of the day in a 40-0 loss to the Buffalo Bills on Sunday. Facing a steady rain and sturdy defense in his first road start, Mills threw four interceptions and oversaw an offense that generated 109 yards in what became the most lopsided loss in franchise history.

“Obviously not the outcome we wanted. I don’t think I played my best football today," Mills said.

He then closed his news conference, saying: “There’s only up from here.”

Trouble is, Mills and the Texans have a long way to go to be competitive after being shut out for the first time since a 27-0 loss at New England on Sept. 22, 2016.

Mills finished the first half with more interceptions (two) than completions, going 1 of 7 for 3 yards. He finished the game 11 of 21 for 87 yards and a quarterback rating of 23.4.

The rookie proved no match for a Bills defense that improved to 10-0 against quarterbacks with 16 or fewer starts since 2019.

“We mixed it up a little bit,” said safety Micah Hyde, who had one of Buffalo’s four interceptions. “But you know, he is a rookie quarterback and we tried to disguise and do that type of stuff. But at the end of the day, we just line up and play our ball.”

Houston's defense was stout in limiting the Bills to a touchdown and four field goals through three quarters before finally sagging.

It was no consolation to linebacker Kamu Grugier-Hill, who called the outcome “one of the embarrassing losses I've ever had.”

“This wasn’t just Davis Mills. Everybody around Davis Mills, nobody played well around him,” Culley said. "You can put Joe Montana out there, and the way we played today, you’re not going to have any success on offense.”

In their second game without injured starter Tyrod Taylor, the Texans' 109 yards were the third fewest in team history while their six first downs were the second fewest.

Houston’s running game managed 42 yards and has combined for 166 in its past three games — all losses — since rushing for 160 yards in a season-opening 37-21 win over Jacksonville. The Texans' retooled offensive line surrendered three sacks, though the first was on Mills, who lost control of the ball while dropping back and fell on it to recover his own fumble on Houston’s opening series.

Penalties and poor execution on first and second down put Houston in long-yardage situations early and often. The Texans converted 1 of 9 third-down chances.

The Texans were penalized 10 times for 100 yards, with the offense flagged five times for 53 yards.

“That’s an undisciplined football team, and it starts with me,” Culley said. “It puts us in bad situations and we’re not going to be able to overcome those things.”

“It’s tough to play behind the sticks,” Mills said. “Trying to put ourselves in advantageous positions to go out there and attack the defense is what we need to do.”

The Texans crossed midfield on four of eight possessions. Mills was intercepted on three of those drives. They reached the red zone only once, when Lonnie Johnson Jr.’s interception allowed them to start their second drive at the Buffalo 13. The Texans turned the ball over when they failed to convert a fourth-and-3 at the 6.

“You have to have sevens when you’re playing teams like this,” Culley said. “I didn’t feel like three points at that time was good enough.”