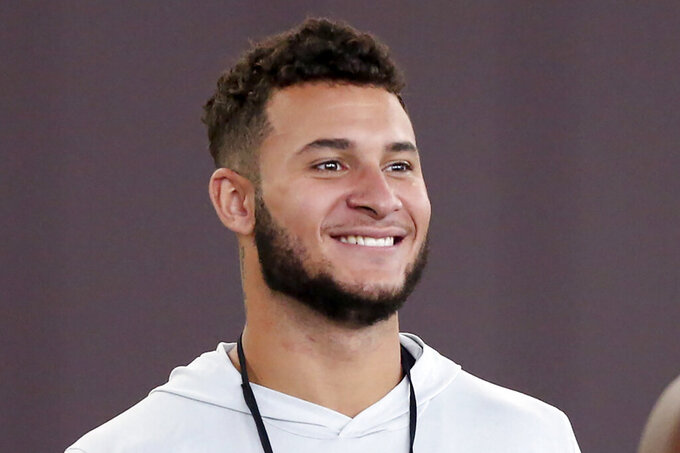 NASHVILLE, Tenn. (AP) — The Tennessee Titans have completed their extreme makeover of one of the NFL's worst defenses.

The latest changes came in the NFL draft with the Titans finishing Saturday making five of their eight selections on defense led by first-round selection cornerback Caleb Farley out of Virginia Tech.

“I feel like we’ve got a good mix of all of that on the defensive side,” general manager Jon Robinson.

The defending AFC South champs had to make changes. All-Pro and AP NFL Offensive Player of the Year Derrick Henry and quarterback Ryan Tannehill not only led one of the NFL’s best offenses, they helped carry the Titans to an 11-5 record and their first home playoff game since 2008.

They drafted a new right tackle in the second round in Dillon Radunz.

But the Titans had only 19 sacks last season, better than only Cincinnati and Jacksonville. They allowed opponents to convert 51.8% of third downs — worst in the NFL by far — while ranking 28th in total yards and 29th in passing yards allowed per game.

The other defensive draftees: Georgia linebacker Monty Rice at No. 92 and Washington cornerback Elijah Molden at No. 100 in the third round; Pittsburgh edge rusher Rashad Weaver at No. 135 in the fourth; and Oregon safety Brady Breeze at No. 215 in the sixth.

This unit returns safety Kevin Byard and added veterans Jenkins and Kevin Johnson. But this group has turned over almost entirely after the release of starting cornerbacks Malcolm Butler and Adoree Jackson and safety Kenny Vaccaro.

Kristian Fulton was a third-round pick and Chris Jackson a seventh-rounder a year ago, and now the Titans have Farley and Molden. Asked about building cohesion in such a young group, Vrabel appeared to reference the “My Man Catches No Balls” motto the secondary had used the past couple seasons.

The Titans lost wide receiver Corey Davis to the Jets and tight end Jonnu Smith to the Patriots and cut receiver Adam Humphries in February.

Josh Reynolds was the big free agent signee, but they didn't take a receiver until the fourth round, swapping their fifth-round pick and seventh-rounder to move up 15 spots for Louisville's Dez Fitzpatrick at No. 109. He led Louisville last season with 833 yards receiving and averaged 19.3 yards a catch.

Tennessee also took Racey McMath of LSU at No. 205 in the sixth. The 6-foot-3, 217-pound receiver should help immediately on special teams thanks to his speed. He was timed at 4.34 seconds in the 40 at his pro day.

Tennessee added pass rushing depth at No. 135 pick overall, and its second in the fourth round with Weaver. The 6-5, 270-pound defensive lineman was an All-American in 2020 when Weaver had 7 1/2 sacks and 14 1/2 tackles for loss, and the Titans will be using him at outside linebacker.

Weaver will have a chance at immediate playing time backing up Dupree and Harold Landry III. He says the Titans got the biggest steal in the draft after believing he'd be taken no later than the end of the second night.

“They got a great value pick in me, and I am excited to prove that to them,” Weaver said.

Tucker McCann, who has yet to play in the NFL, is the only kicker. The Titans have five tight ends and 11 wide receivers. A decision also is due by Monday on whether they pick up the fifth-year option on linebacker Rashaan Evans.

Robinson said the Titans are looking at what contracts they might be able to restructure if needed more salary-cap space.