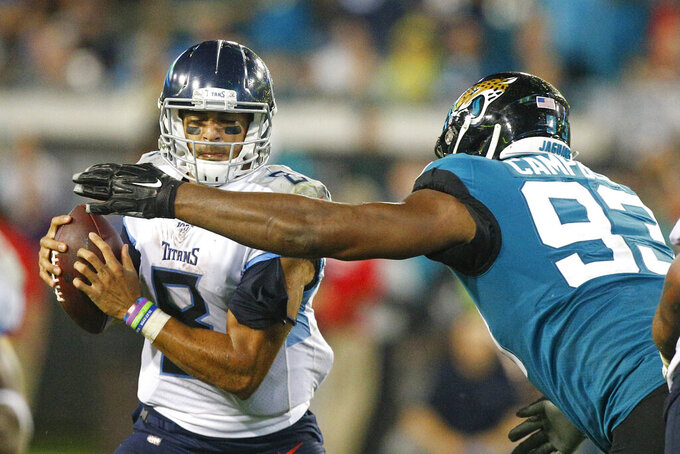 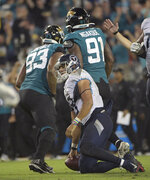 NASHVILLE, Tenn. (AP) — The Tennessee Titans have talked for months about going from good to great in coach Mike Vrabel's second season.

After blowing out Cleveland on the road in the season opener, the Titans (1-2) have lost back-to-back games inside the AFC South in the span of five days. The latest loss was 20-7 loss Thursday night in Jacksonville with an ugly performance allowing nine sacks.

When the Titans weren't giving up sacks, they got caught holding with five of their nine penalties holds wiping out nice gains

"We put ourselves in this position three games into the season," Vrabel said Friday. "We're going to do everything we can to get to 2-2."

The Titans knew the start of the season wouldn't be easy, not with three of the first four on the road. Then three-time Pro Bowl left tackle Taylor Lewan was suspended for the first four games for using performance enhancers. The Titans now have lost a pair of division games to a quarterback who was a backup until Andrew Luck's retirement and a rookie who was a sixth-round pick in April.

Vrabel plans to work on fundamentals and accountability, taking advantage of an extra practice Monday to do just that before a trip to Atlanta on Sept. 29.

"It's a gut check," quarterback Marcus Mariota said after the game.

Tennessee's defense has kept the Titans in striking distance under coordinator Dean Pees. Even that unit has had its issues, giving up a big run in the fourth quarter of each of these losses. Leonard Fournette finished with 66 yards rushing thanks only to breaking loose for a 69-yarder to the Tennessee 9.

The offense. Mariota was 6 of 16 passing in the first half and took blame for missing teammates. He was 17 of 24 in the second half and finished with 304 yards passing. The Titans failed to score in the third quarter with Mariota unable to hit three-time Pro Bowl tight end Delanie Walker twice on a drive that ended when Vrabel went for a touchdown on fourth-and-6. Mariota said he didn't know why there was the difference in his play before and after halftime.

"I got to find it out because I can't start games that way," Mariota said.

They also must protect Mariota better. The Titans changed out both guards from that offensive line, signing veteran Rodger Saffold to a big deal. The line is missing Lewan badly, and he won't be back until October .. New right guard Kevin Pamphile has yet to start after hurting his knee days before the opener. Rookie Nate Davis, who missed a couple weeks of training camp with an undisclosed injury, might be an option now.

Quarterback is not a spot the Titans are thinking of changing Mariota for backup Ryan Tannehill.

Humphries finally got a chance to show why the Titans signed him to a big deal in March with his best game yet in Tennessee. He finished with six catches for a team-high 93 yards that was the fourth-best total in his career, a night that included a 30-yard catch.

Adoree' Jackson as punt returner. The third-year pro has all the physical skills and speed, but Jackson's decision making and ball handling keep costing the Titans. On a rainy night, Jackson muffed the first punt and failed to fall on the ball as several Jaguars closed in for Tennessee's first turnover of the season. He also failed to fair catch another punt, costing the Titans 17 yards.

Linebacker Rashaan Evans was hurt in the final seconds of the first half. But Vrabel said Evans should be OK.

17 — Mariota already has been sacked more through the first three games than any quarterback in the NFL since 2002, according to the NFL. That's not improvement over last season when he was sacked a career-worst 42 times.

Time to work on fundamentals again before a short trip to Atlanta.