Titans need to give Tannehill, Henry, Brown help at receiver 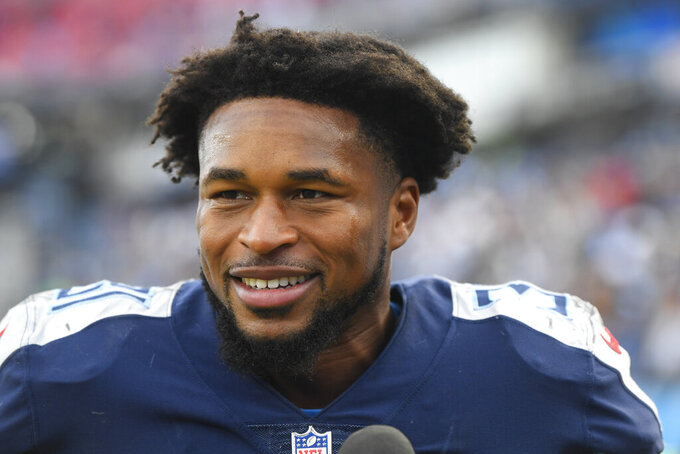 FILE — Tennessee Titans free safety Kevin Byard is interviewed after a win over the New Orleans Saints in an NFL football game Nov. 14, 2021, in Nashville, Tenn. The Tennessee Titans start their offseason program Monday with the AFC much stronger around them after earning the conference's No. 1 seed and not getting past a divisional game on their own field. (AP Photo/John Amis, File)

LAST SEASON: The Titans earned the No. 1 seed in the AFC despite using an NFL-high 91 players, most ever in a non-strike season, because of injuries. RB Derrick Henry missed the final nine games with a broken right foot. He was among 26 Titans on injured reserve, not counting 21 who spent time on the reserve/COVID-19 list. A trade for seven-time Pro Bowl WR Julio Jones didn't pan out as injuries limited him to 11 games. The Titans lost to Cincinnati in the divisional round.

OUTLOOK: The Titans have put together six straight winning seasons with GM Jon Robinson using a combination of free agent signees and the draft to turn one of the NFL's worst defenses into one of the league's best last season. Now he needs to address the offense that dropped to 24th in the NFL in yards passing. QB Ryan Tannehill needs more targets beyond Woods and Hooper. Bolstering the offensive line also is a top priority after cutting LG Rodger Saffold for salary-cap space and letting RT David Quessenberry leave in free agency. It won't be easy with Tennessee's second-round pick in Atlanta due to the Jones' trade. The Titans also don't have a seventh-rounder sent to Miami in 2021.