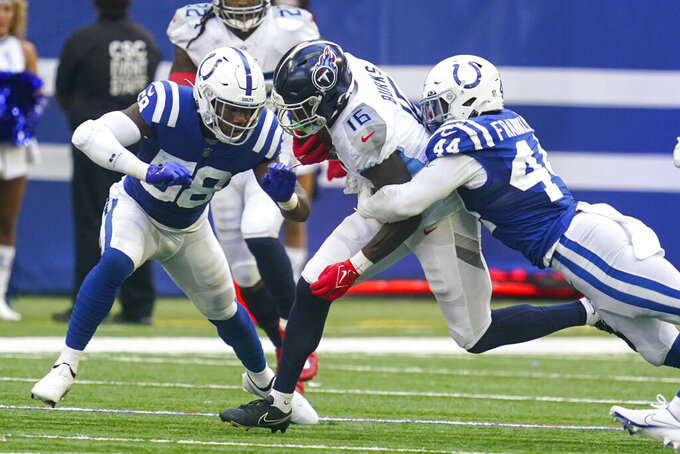 NASHVILLE, Tenn. (AP) — The Tennessee Titans placed their first-round draft pick Treylon Burks on injured reserve Saturday with an injured left toe, ensuring the wide receiver won't be back until mid-November at the earliest.

Burks was carted to the locker room in last week's win at Indianapolis, and the 18th pick overall out of Arkansas did not practice all week. Coach Mike Vrabel already ruled Burks out Friday.

This move gives Tennessee (2-2) 11 players on injured reserve a month into the season. Burks ranks second on the Titans behind veteran Robert Woods with 10 catches for 129 yards.

The rookie is the receiver taken with the draft pick Tennessee got sending wide receiver A.J. Brown to Philadelphia in April. With their bye up next, Burks will have to sit out four games before being able to start practicing. That means he couldn't return before Tennessee hosts Denver on Nov. 13.

The Titans (2-2) also activated linebacker Monty Rice from the physically unable to perform list. He only returned to practice Wednesday. They elevated also wide receiver Dez Fitzpatrick and linebacker Joe Schobert from the practice squad for Sunday's game at Washington (1-3).